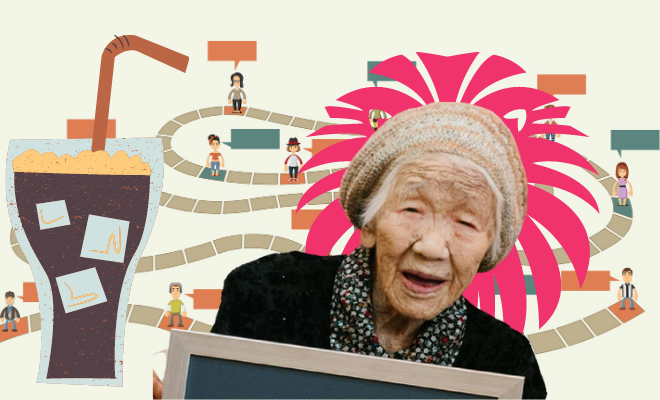 117 YO Kane Tanaka Beats Her Own Record To Become Japan’s Oldest Person, Celebrates The Title With Coke And Chocolates

Life is short, they say. And it is, at least for people like me who went for a run 3 years ago, gobble on midnight snack every night and have a messed-up sleep cycle. It would be a miracle if I lived past 70 years of age, let alone setting a world age record like Kane Tanaka, a woman of 117 years of age in Japan. I am sure people in Japan would find my lifestyle very questionable. The life expectancy of Japanese people is more than that of the rest of the world. According to studies, on average man in Japan lives up to 79 years while a Japanese woman enjoys a healthy long life of over 86 years. And there are women who have survived much longer than that and even hold a world record for being the oldest person.

Meet Kane Tanaka, a 117-year-old woman who broke her own record and celebrated being the oldest person to ever lived in Japan, and third worldwide on September 19. She was titled the world’s oldest living person back in March this year by the Guinness World Record. She celebrated the record with a bottle of Coca Cola and savoured some chocolates—her favourites. Japan marked her victory by declaring the day a public holiday in honour of its senior citizens. How cool is that!

The title was previously held by Nabi Tajima aged 117 years and 260 days who died in April 2018. Tanaka on turning 117 years and 261 days set the new all-time Japanese age record on Saturday. The granny has a 60-year-old grandson Eiji Tanaka who said, “It’s amazing that she can eat and talk on her own, even now adding that she is “enjoying her life every day.” “As a family, we are happy and proud of the new record,” he said.

Also Read: A 103-Year-Old Granny Cheered Herself Up During The Pandemic By Ticking Two Items Off Her Bucket List. She Is Coping Tough Times Better Than All Of Us

Tanaka has been living in a nursing home in Higashi Ward away from family to ensure safety in the wake of coronavirus outbreak.  She spends her day playing Reversi, a board game with the fellow resident and apparently is a pro at the game. She was also chosen to be the torch relay runner for the 2020 Tokyo Olympics but unfortunately it got postponed. According to her family, she is  a strong-willed and hard-working woman and she wishes to visit the United States one day.

Born in 2 January 1903, Tanaka has lived through five reigns of five Japanese emperors and five Imperial eras of the country. She was married in 1922 when she was 19 years old and had four children and adopted the fifth. She ran a noodle shop on her own after her husband and eldest son were sent to the Pacific War. After her husband’s return, the couple ran a rice shop. This makes me think about all the major events she’s witnessed in her long life. I mean, the year she was born, the Wright brothers made their first successful flight with a powered aircraft. She must be having so many interesting stories and first-hand experiences of the historic events of Japan to share. Also, I would like to know what really is the secret of her long life.

She is the third person in the world to have lived this long after Frenchwoman Jeanne Calment who passed away at 122 years and 164 days in 1997 and an American woman Sarah Knauss who died at an age of 119 years and 97 days in 1999. Her grandson says, “When she reaches the age of 120 three years from now, my wife will have reached her 60th birthday, so I’d like for us to celebrate together.”

On January 2, 2020, Guinness World Records officially confirmed Kane Tanaka from Fukuoka, Japan as the oldest person living at her age of 117. Despite her age and health issues, Kane is happy, and she enjoys every single moment of her life. pic.twitter.com/Xp8nVHbAaf

Tanaka wore a T-shirt with her face on it and a text that read “Congratulations on setting Japan’s oldest age record” which was giver to her by her 23-year-old great granddaughter and rest of the family members for the day she was honoured with the title. It is incredible to see her how she enjoys her life even at the age of 117 and so cool that she celebrated her achievement with her favourite fizzy drink and chocolates.

I am only in my 20s and I lose the will to live every alternate day, especially now in the lockdown. Maybe we can all learn a thing or two from this too-cool-for-school granny. Here’s wishing her many more heathy and happy years and cokes and chocolates!