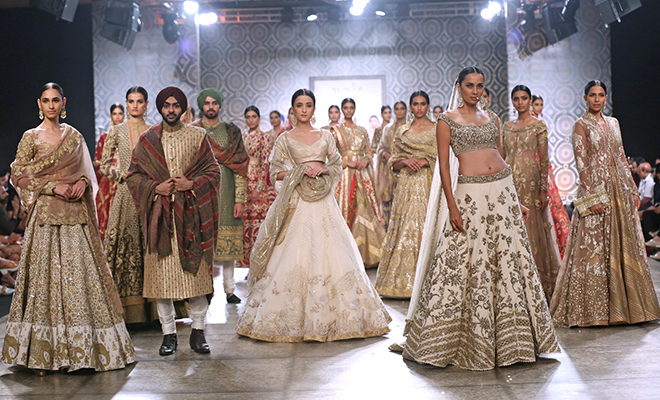 Sanjay Leela Bhansali is one filmmaker whose work is synonymous with grandiosity — when you think of him, all you can imagine is extravagance. From Hum Dil De Chuke Sanam to Devdas, Ram Leela to Bajirao Mastaani, the intricate designing that goes into the location, sets, and costumes is absolute perfection! Besides being known for its plot, each movie has had character, in terms of the costumes as well. Whether it’s Aishwarya Rai’s European inspired look in Guzaarish, Deepika Padukone’s red lehenga choli in Ram Leela, or even the golden ensemble she wore dancing to the tunes of Deewani Mastaani in Bajirao Mastaani — the costumes are resonating and unforgettable characters in themselves. Debuting in the cinematic world with the director’s upcoming period film, Padmavati, are designer duo Rimple & Harpreet Narula, who have totally met up to this perfectionist director’s eye for detail.

The couture label is all set to make cinematic history with their intricate costumes for the film and what’s even more baffling is that weren’t many references to fall back on. The period movie based in the 12th century was a challenge for the designers due to lack of historical direction; however, purely by researching the era, the designers were able to understand how to go about this historical saga. Padmavati, which is based on the 1303 siege of the Chittor Fort in Rajasthan, encompasses various cultures, including Rajputi, Turkish, and Afghani. Set to release in November 2017, we cannot wait to experience this on the big screen.

With their last showcase called Hiraeth at the India Couture Week 2016, we know that this duo’s Bollywood debut will be nothing less than breathtaking. We chat with Rimple and Harpreet about the all-consuming process of working on an epic saga like Padmavati.

What is it like working with Sanjay Leela Bhansali?

Working with Mr Bhansali is a fabulously enriching experience for us as designers. He is a master of his craft, a perfectionist with a great eye for detail, as we all know. The process has been of constant evolution, a new learning experience every day. It is interesting for us, as designers, to see how our perception of drama in clothes has also undergone a change while working on the project — how at times ‘less is more’ given the moment in the story line, or ‘more is less’, and also how various elements need to be layered for cohesive look that is in sync with the director’s vision.

What were your visions for the costumes in the film?

Surprisingly, we were on the same page as Mr Bhansali right from our very first meeting, which turned into an impromptu look test. We did not carry any particular pieces from our existing collections, but rather samples of old textiles from our personal archive that we felt would fit in with the period and characters. During the first few meetings we had with him and his team, they took us through the story line, guiding us through the evolution of the characters, and the need of the clothes to not just be beautiful garments, but also to bring out the characters’ underlying nuances and emotions. Keeping this in mind, we started with our own research process and came up with the key looks.

What was the inspiration and research behind the costume pieces?

Given that there is not much documentation of the actual attires of that era, we have done intensive research on the period by way of going through old travelers’ accounts and manuscripts, as well as  making regular visits to the Calico and Jaipur museums, in order to get the touch-feel-look right. Most of the actual samples of antique textiles and costumes from that period are dispersed all over the world in various museums and archives, so our love for travel and museums also came in handy when we had to collate all the information required during this process. Even then, actual living samples of such textiles are few and far between, so we had to refer to a lot of miniature paintings, murals, and frescoes to get the nuances of the styling as close to how they used to be.

In every SLB production, there is one costume that becomes iconic with the film and the character. Similarly, are there any standout pieces in this one?

Interestingly, we asked Mr Bhansali during the initial script readings which outfit he would consider the most important and iconic, and all he said to us was that between the 3 main characters, we would need to come up with over a hundred looks and that each look has to be equally important, as it would define that particular moment in the storyline, so we really had to give our best to each.

Such costumes for period films tend to be rather heavy in terms of both, weight, and work. What was the heaviest costume that was designed for this one?

Given that we are dealing with traditional Indian attire from the 12th century, a lot of the looks have layers to them, so they tend to be heavy, weight wise, but we have tried to use mostly organic, lightweight fabrics to minimise the overall weight.

Where were the costumes made?

Many contrasting cultures come together and coalesce during the course of the film’s narrative — the Sinhalese princess who becomes a Rajput Queen, the Rajput prince who becomes a warrior king, the Turkish/Afghan invader who goes on to become the Sultan of Delhi. Each characters’ clothes reflect both their personalities as well as their cultural backgrounds.

Keeping that in mind, we have sourced old textiles from all over the subcontinent that are being used alongside new organic ones, as well as have commissioned embroidery karigars and block-print artists from Kolkata and Jaipur to create the art works for the ensembles. The final execution of the looks, however, happens at our atelier in New Delhi.

What was it like designing for each character and the actors playing it as well?

Not only is she one of the most talented actors of her generation, from a fashion point of view, Deepika is one of the best muses a designer can dress today. All three lead stars — Deepika, Shahid, and Ranveer — are truly dedicated to their craft and the moment they don a costume, they leave behind the person and become the character, imbibing Mr Bhansali’s vision — it really feels like we are witnessing history being played out in front of our eyes, when we are on set.

They veritably breathe life into our creations as well as the historical figures they are portraying, subtly fusing traits of their personalities into the depths and layers of their character’s natures. The clothes that we have created integrate these nuances and have been designed to bring out ‘that’ particular moment of the character in the story line.

Any more Bollywood projects for you in the pipeline?

As of now, we are totally consumed with the execution of this project, as the looks are extremely detailed and research oriented. As designers, we are always on the lookout for a fresh perspective, a new stimuli that fuels the creative process, so perhaps once the work on the movie concludes, we will explore other such avenues as they come along.