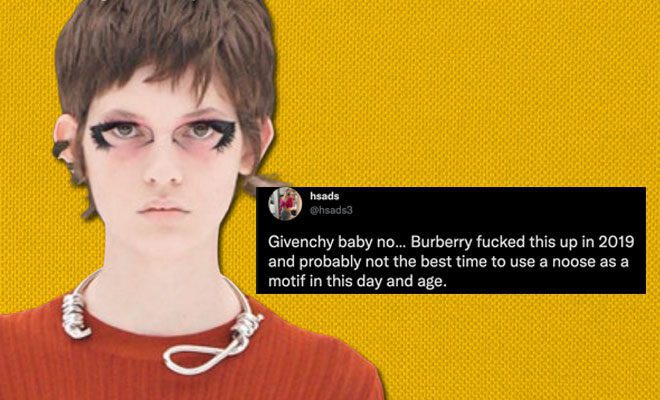 Givenchy Called Out For Noose Necklace That ‘Glamourises Suicide’. Really, Who Approves Such Designs?

Suicide is the fourth leading cause of death in today’s world. Over 70,00,000 people die every year due to suicide. And for every person that dies due to suicide, there are many more who attempt suicide. After knowing all of this, there are still times when either out of indifference or out of ignorance, suicide has been glamourised in art, even in fashion. Remember the time when Burberry came out with a hoodie with a noose around their neck at London Fashion Week? Well, this time, despite a precedent that should’ve helped them know better, it is Givenchy who has come out with a noose necklace on the Paris Fashion Week runway, as part of their Spring 2022 collection. And obviously, people are having none of it.

For a quick history lesson, back in 2019, Burberry had debuted a hoodie with a noose around the neck at the London Fashion Week and it was criticized and called out immediately. In fact, Liz Kennedy one of their own models, reportedly went online and wrote how suicide is not fashion nor is it glamorous or edgy. After which, Burberry’s boss Marco Gobbetti apologized for the design and admitted that it was insensitive of them to add a noose around the neck, and that they had made a mistake debuting it. And now Givenchy is facing the same backlash from netizens, but perhaps with a little more heat, because really why would you not learn from history and repeat it this soon? Who is approving these designs?

Givenchy baby no… Burberry fucked this up in 2019 and probably not the best time to use a noose as a motif in this day and age. pic.twitter.com/vCDzWfwEUC

It has been two years since the Burberry incident and now Givenchy has come out with a noose necklace in their spring 2022 ready-to-wear collection. Calling them out on their insensitivity, Diet Prada wrote, “You’d think the industry would’ve learned not to put things that resemble nooses around a model’s neck after the whole @Burberry noose hoodie debacle in 2019… This @givenchyofficial necklace that just came down the runway steers dangerously close to that same territory. Really makes you wonder how no one noticed, but alas… history repeats itself.”

The Instagram post by Diet Prada went viral and netizens have taken to the comment section to slam Givenchy over their noose necklace. In fact, even activist and social media influencer Kim Saira commented on it stating, “How did this go through several people before this show and everyone thought this was okay? Also, why am I not surprised?”

Also Read: Kangana Ranaut Paired Her Rs 600 Saree With A Givenchy Coat And Prada Bag. What A Fab Way To Upgrade!

Honestly, this is really disheartening to know that the fashion industry has become so indifferent or ignorant to issues like suicide. Even art has symbolization and a noose this obvious anywhere in the world would denote suicide. Brands like Givenchy and Burberry who are on such a huge platform should be a little more careful when coming up with designs that can be considered symbolic.

Greta Thunberg On A Vogue Cover Talking About Fashion And Climate Change Is Inspired, But Feels A Tad Misplaced And Token