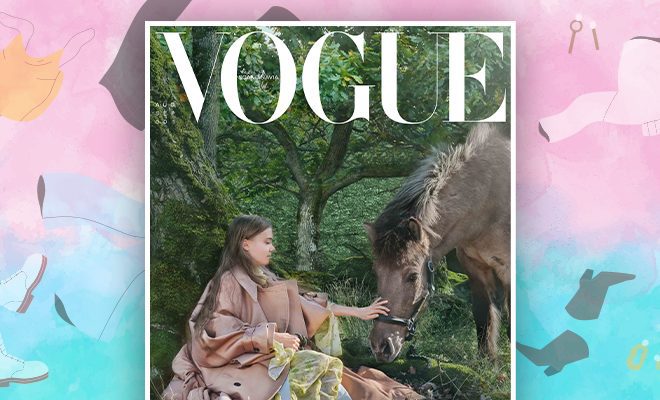 Greta Thunberg On A Vogue Cover Talking About Fashion And Climate Change Is Inspired, But Feels A Tad Misplaced And Token

A lot of people, not just climate change deniers, dislike Swedish teen environmental activist Greta Thunberg because they think she’s too much. I personally think they’re just ageists, threatened that a teenager could feel so passionately about something like they never could. And that she’s out there making a difference while they sit at their keyboards and find something to complain about. However, while I support the causes she stands up for, and I admire her gumption and the sass she often employs to show old condescending men (Trump) their place, I do think that not every platform is the right choice to voice your opinion.  Especially when it is a fashion magazine like Vogue. And especially when it is about fast fashion being the second biggest contributor to climate change.

Vogue Scandinavia chose the 18-year-old activist to be their first ever cover girl. Nestled amidst the grass in an oversized brown trench coat, Greta is seen caressing a horse, with the words ‘The Wonders Of Greta Thunberg’ stamped on the bottom. Within in the pages, in her interview, Thunberg talks about the climate impact that the fashion industry, particularly fast fashion has, which is damaging in tremendous ways. She called out fashion brands for ‘greenwashing’ their image with ad campaigns about sustainable fashion and what not, while the reality is far from that.

Many make it look as if the fashion industry is starting to take responsibility, spending fantasy amounts on campaigns portraying themselves as ”sustainable”, ”ethical”, ”green”, ”climate neutral” or ”fair”. But let’s be clear: This is almost never anything but pure greenwash.2/3

You cannot mass produce fashion or consume ”sustainably” as the world is shaped today. That is one of the many reasons why we will need a system change.
Photo by Alexandrov Klum 3/3 https://t.co/jrNSf205XQ

Greta goes on to talk about how her own purchase of clothes has been limited, revealing that she last bought a new item of clothing, which was actually “second-hand” some three years ago and now mostly borrows clothes from people she knows. She called for a system change and said that the way in which the world is shaped today, there is no chance that fast fashion could be produced and consumed sustainably.

Many people have applauded Greta Thunberg, who on Sunday poster her Vogue cover on her social media and wrote about her views on fashion’s impact on climate, for choosing to use the world’s foremost fashion magazine to call out the fashion industry. It’s like going into enemy camp, and then using their comms to reprimand them. And indeed, Vogue’s idea to have Greta Thunberg on its cover and take at least some responsibility as a fashion magazine themselves is commendable and truly inspired. In fact, in their Instagram post caption, Vogue Scandinavia said that while no print magazine can be completely sustainable, they’ve tried their best to keep their carbon impact during this issue to a minimum.

Also Read: Greta Thunberg Got Her ‘Badla The Revenge’ From POTUS Donald Trump With The Most ‘Chill’ Tweet!

However, despite Greta’s sincere intentions and Vogue’s efforts, this still feels a tad misplaced and even somewhat token activism. It is not sustainable monetarily for fashion magazines to stick to the choices they would’ve made for this particular issue when they do its next issues. And then, what really is the point of doing a one-off good deed when you’re actually going to fall back into old patterns for the very next issue itself?

Fashion magazines are also history keepers and facilitators of the very industry accused of this crime agains the environment. And until the industry changes systemically, there’s no way that a publication like Vogue can make difficult choices about supporting only sustainable brands and designers in its pages. Let’s also not forget that for print and digital media, it is the advertisers that keep them running and being picky about whose money to take and whose not is again a tough choice.

The message and the effort is admirable. But I am not sure I am completely convinced about the medium used to express it.

The Worlds Most Expensive Bag, Made From Alligator Skin, Will Help Save The Oceans. It’s Extremely Ironic