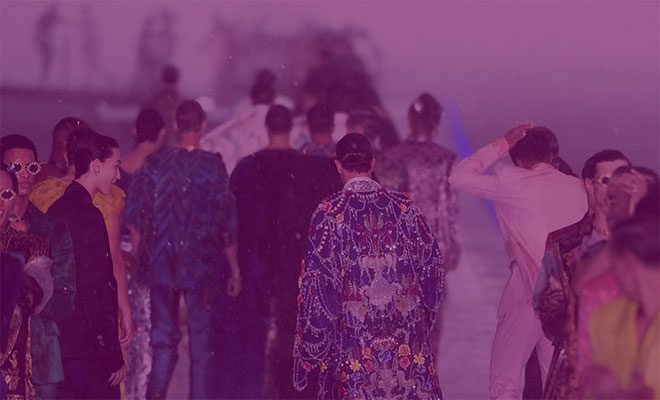 Despite A Hailstorm, Models In The Dolce & Gabbana Fashion Ruled The Ramp. The Internet’s All Praise!

The show must go on. Never has this statement been more true than on the ramp, where models continue to walk despite minor to major mishaps, without losing composure. In fashion, chaos and unexpected situations are a given. But at the recent Dolce & Gabbana fashion show in Italy, the unexpected situation was the marble-sized hailstones that poured down on the models, celebrities, influencers, designers, and others that were present. But despite the chaos of the hailstorm, the models at the show kept their cool (the irony) and continued ruling the ramp despite the hailstorm!

At the Dolce & Gabbana Alta Sartoria show that took place in Venice, Italy, a hailstorm threatened to turn everything into a chaotic mess. Sizeable hailstones falling from the sky had everyone in the audience running around looking for shelter. However, the models stayed calm amongst the chaos and kept the show running.

Videos of the star-studded and hail-studded Dolce & Gabbana show have gone viral on social media. And the social media audience was all praises for just how calm and composed the models were and how gracefully they ruled the ramp even with a hailstorm coming down.

The reports also show that while the models continued to do their thing, many celebrity attendees, like Vin Diesel Jennifer Lopez, Kourtney Kardashian, Heidi Klum, Kris Jenner, Travis Scott, Helen Mirren, and so on were spotted pulling out their umbrellas and or creating a makeshift shelter with their cushion seats to protect themselves from the hailstorm.

Clearly, the showstopper of the Dolce & Gabbana fashion show then were the models’ display of their professionalism by walking down the ramp irrespective of the hailstorm. In fact, Dolce & Gabbana’s official Instagram page later shared a post that showed the models enjoying themselves in the rain.