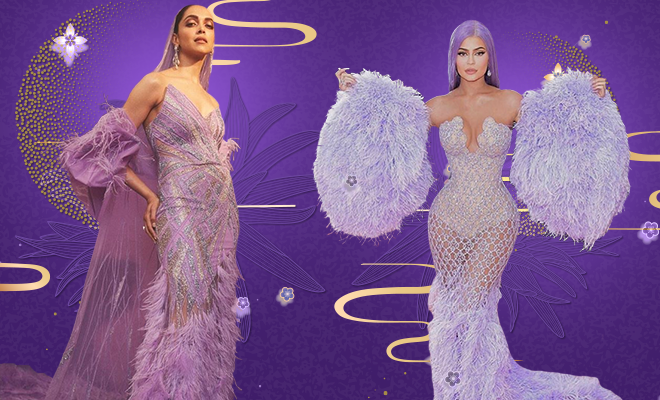 The 2019 leg of IIFA awards went down last night and we have mixed feelings about it. All the glitter, glamour and noise around the event was barely enough to cover up the underwhelming red carpet fashion. It was quite disappointing to see the stars in attendance not going through with the essence of awards show fashion. The barrage of boring and conceptually wrong gowns gave off a feeling of chaos that is anything but stylish. While there was a saving grace in the form Genelia Deshmukh in her sage green gown, the rest of the glitterati left us wanting for more. Among the accused also stands Deepika Padukone, who hardly ever fumbles on her red carpet style!

According to the designer’s page, the gown is inspired by “stained glass windows that reflect a beautiful blend of lavender and amaranth purple hues as the sun sets”. The gown features an off-shoulder bustier on top and opens up to a mermaid-like silhouette at the bottom. Talking about the ensemble itself, we are not a fan of it. The shape of the gown is unflattering on Deepika, making her frame look disproportionate. We aren’t feeling too good about the removable sleeves either. They seem out of place and don’t nearly add as much character as the gown itself. Plus, the hood has a very ‘Nuns Gone Wild’ vibe and will fit excellently at RuPaul’s Drag Race under the category of ‘Vatican Chic’!

Having said that, it’s not the failed ensemble that people are talking about, it’s the uncanny resemblance her look holds to Kylie Jenner’s Met Gala Versace appearance!

Netizens were quick to point out the similarities between not just the gowns, but also the way they were styled and treated. The feathered plumage, mesh-like look and removable sleeves are the ones to be blamed. But here’s the thing, the Gaurav Gupta gown on Deepika might look like Kylie’s, but it is no way the same. The Versace gown on Kylie is a custom made, hand-linked metal mesh design created especially for her. The ostrich feathers were carefully stitched on for a fuller look at the bottom. Also, Kylie’s gown comes with a feathered hat!

We do agree that Deepika’s gown could have pulled inspiration from Kylie’s look, especially in the way it will was styled. We do hope that the designing team would have tried to change things up in the make of the gown. The hooded train, while not a first from Deepika, doesn’t help the obvious comparisons. We wouldn’t go as far as calling it a “copy”, but it is definitely a letdown from the actress. Deepika is known for creating original looks for her red carpet moments, which is why this “inspired” look becomes one of her fashion fails this year!

Talking about the aforementioned hooded train, what’s up with that anyway? We saw Deepika a couple of weeks ago at the AJSK show walking in the same look. The exact same backed up the hood and long train! I mean, we get it that Deepika rocked the look but to repeat it so soon is playing safe. Something we didn’t expect of Deepika or her stylist Shaleena Nathani. Sigh!

ALSO READ: While Deepika Made For A Beautiful Showstopper For AJSK, We Expected Aishwarya Or Sonam To Do The Honours

There can only be one lavender feathered gown in this dog fight and it’s the Versace original that stands undefeated! Check out what all went in in creating the look, in an extremely entertaining BTS video:

What do you guys think of this “unfortunate incident”? Let us know in the comments!