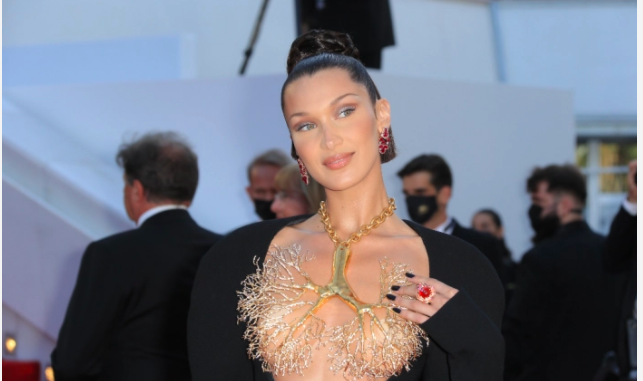 If anyone were to ask me what movies are premiering at the Cannes Film Festival this year, I would most definitely draw a blank. I am not the biggest cinema buff out there but I still follow Cannes primarily for the fashion. Usually, I am only eager to see the gowns of our Bollywood celebrities. This year though, as I was scrolling through my Instagram Explore page, Bella Hadid’s Cannes outfit immediately caught my eye. It’s couture, risque and it’s got the perfect amount of drama.

Wearing one of the most stunning high-fashion outfits the 74th annual Cannes Film Festival red carpet has seen so far, Bella Hadid managed to take our breath away (pun intended). To the premiere of Tre Piani (Three Floors), the 24-year-old model wore an avant-garde gown from the Schiaparelli Haute Couture Fall-Winter 2021/22 collection, designed by Daniel Roseberry.

Also Read: Priyanka Chopra Jonas Reveals How She Got Her Cannes Outfit Fixed Minutes Before She Had To Walk The Red Carpet. She Has Some Fashion Hacks Up Her Sleeve

Her figure-hugging black wool dress had a neckline that cut under her chest. And if that isn’t sexy enough, the highlight of her outfit was the gold-dipped necklace adorned with rhinestones that covered her chest. It was shaped like the bronchi passageway of the lungs. Although at first glance, I didn’t enjoy the necklace as much. But the more images I saw the more it grew on me. With this gorgeous look, Bella sported dramatic makeup and wore her hair up in a tight but sleek bun. She accessorized with large ruby drop earrings and a ruby ring.

Every aspect of her outfit, as extra as it was, just worked. Of course, the confidence with which she carried herself just proved once again that she is the perfect showstopper. All through Cannes week, Bella has been serving up some delicious looks. She wore a white vintage Jean Paul Gaultier gown with a black sheer veil train to Cannes’s opening night and then later wore a white and black Lanvin mini-dress for the Chopard dinner.

Billie Eilish Was Trolled For Her Oversized Clothes. Now She’s Being Trolled For Wearing Lingerie. There’s No Winning