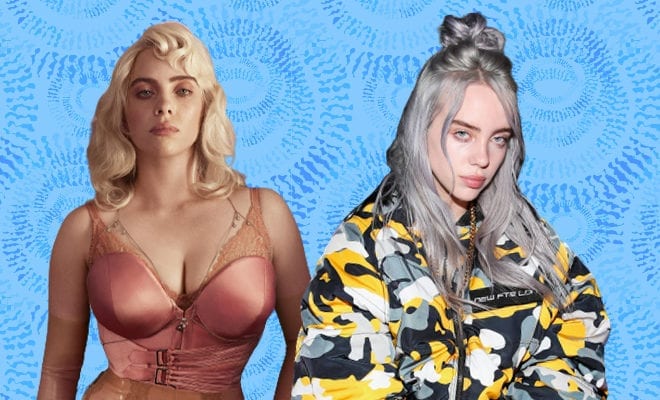 Billie Eilish Was Trolled For Her Oversized Clothes. Now She’s Being Trolled For Wearing Lingerie. There’s No Winning

Billie Eilish’s obvious liking for oversized clothing is no secret, more so because it has been excessively talked about by the press and the people alike. Every celebrity has a distinctive style statement and there may or may not be a reason behind why they dress that particular way. It may be that they look good in certain silhouettes and styles or maybe it’s their way to express themselves. For Billie Eilish, who we have always seen sporting loose-fitting clothes whether it’s red carpet or her music videos, it was more about keeping judgy eyes of people from body shaming and sexualising her. She has said that relaxed fits are freeing, which we get since people cannot scan your body through them. As a teenage celebrity, she didn’t want that and it was her call.

However, she recently left everyone gasping in disbelief when she posed in lingerie for British Vogue’s cover shoot. It was surprising to see the popstar swapping her baggy styles for corsets and suspenders, NGL. I rubbed my eyes too. But it seems like some of her fans and followers aren’t too happy about it. People are accusing her of “changing her values and selling out” just because she changed the way she dresses. The comments on the magazine’s posts are filled with disappointed fans and trolls who said “she doesn’t look like herself”.

But wait, wasn’t she criticised earlier, probably by the same people online, for wearing oversized clothes? Yeah, that’s right. It was a topic of discussion when she hid her body in loose clothes and it’s appalling for people now when she decided to ditch it for a magazine shoot and wore sexy lingerie. She is a 19-year-old celeb who’s won numerous awards for her music but her choice of clothing is a national debate. People had a problem when she wore baggy clothes and now they are losing it when she bares it in lingerie. *Facepalm*She

Also Read: Twitter Slams Vogue For ‘Whitewashing’ Kamala Harris On Its Cover, Not Putting Enough Effort In Presenting Her

A lot of celebrities defended Eilish saying that she’s just a woman who can dress however she wants, whether it is an XL hoodie or a corset. Beauty influencer Matt Bernstien tweeted, “it is almost as if billie is a literal teenager who can change her mind and still respect herself regardless of how much she shows her body.” Actress Jameela Jamil put up an entire post on her social media account slamming the media and trolls who are being foul about her decision to wear what she wants.

She wrote, “Fuck the media and fuck the society who indulge and feed the media by trolling women, nay… TEENAGE GIRLS over how they dress. This girl has broken 14 RECORDS IN THE HISTORY OF MUSIC. This aesthetic doesn’t impact her career because it literally can’t get any bigger or better. She’s now just old enough to feel safe enough to dress how she wants. She was a minor who wanted to cover up before. She didn’t want to be judged and sexualized as a child. That’s not a vow.”

Imaging dressing a certain way to prevent people from saying things about you but they nevertheless did. And when you finally switch up your look after years because you feel comfortable dressing the way you want, they still have something to say about you. This is really sad. Celeb or not, teenager or not, she is allowed to change her mind about how she wants to dress, and it shouldn’t be anyone else’s concern. Plus, it was so much more than a celebrity changing her style. She ditched her inhibitions about her body and what people think by ditching those sweatshirts and pyjamas for this shoot. And this needs to be celebrated.

Also Read: Billie Eilish Was Trolled For Her Weight Because She Doesn’t Conform To What Society Thinks Is Desirable. She Gave It Back