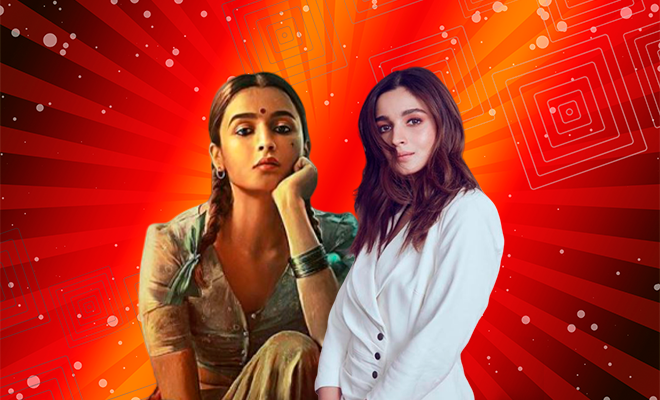 Wednesday morning brought a treat for cinephiles in the form of Alia Bhatt’s first look at the Sanjay Leela Bhansali directorial Gangubai Kathiawadi. The film chronicles the life and times of criminal, don and sex worker Gangubai Kathiawadi, who was prolific in the 60s in Mumbai as the matriarch of a sex empire. The actress can be seen sporting a distinctive character look featuring the big red bindi, associated with the woman, kohl-lined eyes and a face tattoo. This tattoo traces its origins to the area of Kathiawad and Rabari women from the Kutch area who decorate their face with multiple tattoos, in this manner.

Given the premise of the film, this role seems like Alia’s most challenging yet. I was hit with a tinge of nostalgia when I first dived into what the film was about and the story of this Mumbai don and former prostitute. Kareena Kapoor Khan gave herself to a similar role in order to break her ‘good girl’ mold and prove her mettle as a serious actress with Chameli way back in 2003 and the rest is history. Alia too isn’t someone we wouldn’t pick to essay a role like this and we are glad SLB chose to yank her out of her comfort zone and thrown into the trenches with a controversial role such as this. She certainly looks the part of a young woman caught in the midst of something she doesn’t fully fathom, the close-up looks intense.

ALSO READ: Alia Bhatt Reveals How She Handles Success, And It’s The One Thing Every Millennial Needs To Hear!

The film gets more intriguing when we look at an additional artwork of the character.

The painting-like portrait hides many details that inform us of her character already. The braless-blouse that was only accepted among prostitutes back then and lungi skirts that are they often wore are a good touch. She is also seen in ribboned-pigtails and a blank expression on her face. As far as first looks go, this is a pretty innovative way to introduce a character-driven movie. No need for grand sets when you are telling the story of a young woman literally dominating an industry that has been abused and tabooed for a very long time. Gangubai was known to being very protective of her girls, becoming a big supporter of prostitution in later years. While the conversations around prostitution being legal and regulated have just begun in our society, we wonder what kind of waves this film will create.

Is It Denim Jacket? Is It A Trench Coat? It’s Alia Bhatt’s Love For Half And Half Clothing. But It’s Confusing