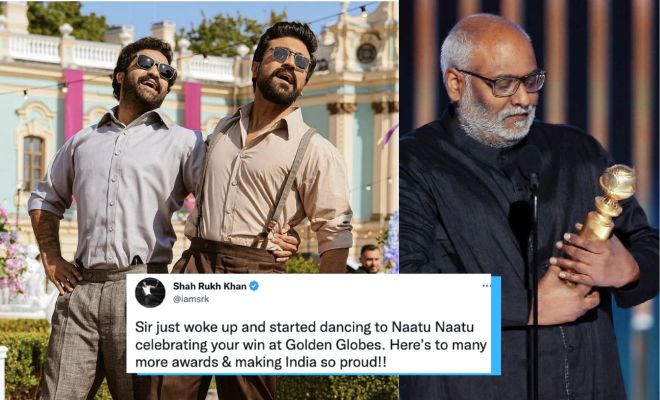 On most days we wake up to read some truly depressing news stories but today on January 11, we all woke up to what I’d called the best news of our lives! Jr NTR, Ram Charan, Alia Bhatt and Shriya Saran starrer epic drama film RRR brought home a Golden Globe Award. Yes, RRR won the first ever Golden Globe Award for India in the Best Original Song category for the song ‘Naatu Naatu’.

Congratulations & thank you PEDDANNA for giving me #NaatuNaatu. This one is special.:)

I thank each & every fan across the globe for shaking their leg & making it popular ever since the release🤗#GoldenGlobespic.twitter.com/cMnnzYEjrV

I've danced to many songs throughout my career but #NaatuNaatu will forever stay close to my heart… @mmkeeravaani pic.twitter.com/A3Z0iowq8L

The RRR song ‘Naatu Naatu’ was also highly celebrated at the screening of the film in Los Angeles a day before the Award function. The event was attended by SS Rajamouli, Ram Charan, Jr NTR, MM Keeravaani as well as the crew of the film. Accepting the award, Keeravaani dedicated it to director Rajamouli and his vision while thanking the lyricist as well as the Jr NTR and Ram Charan for giving the song their all and dancing with “full stamina”.

Every Indian is proud of the global recognition for #NaatuNaatu song from #RRRMovie Heartiest congratulations to ace music composer, Keeravani Garu & RRR team for bagging the #GoldenGlobes2023 Award for the best original song! https://t.co/1Z8QITdWJj

What a moment for #IndianCinema! Congratulations to the entire team of @RRRMovie! Specially to the masters @mmkeeravaani &. @ssrajamouli! And to our friends @AlwaysRamCharan & #JrNTR! They literally danced into the hearts of audiences worldwide! Jai Ho!😍🇮🇳 #GoldenGlobes2023 https://t.co/QTMMRCWJpk

Sir just woke up and started dancing to Naatu Naatu celebrating your win at Golden Globes. Here’s to many more awards & making India so proud!! https://t.co/Xjv9V900Xo

Watching the world cheer for an Indian film is a dream come true!! This year couldn't have started on a better note! Congratulations @mmkeeravaani garu, @ssrajamouli sir, @tarak9999, @AlwaysRamCharan & the entire team of #RRR… Many more to come!! 🤗🤗🤗 https://t.co/a2a17lnJdN

Delighted to learn that @RRRMovie has won the #GoldenGlobes Award for Best Original Song! Congratulations to @mmkeeravaani, @ssrajamouli and the entire team! Absolutely proud! Like I said earlier, Telugu has now become the language of Indian soft power.#NaatuNaatu #RRRMovie pic.twitter.com/ZpIQ7TbI5K

You did it #RRR so so proud and happy for you @mmkeeravaani sir @ssrajamouli @tarak9999 @AlwaysRamCharan .. 🔥🔥🔥🔥🔥 https://t.co/QuXcYm5OuI

Heartiest congratulations to @mmkeeravaani and team @RRRMovie for the golden globe award for best original song Naatu Naatu ! So proud of you sir !! @ssrajamouli

Such a BIG day for Indian Music! #NaatuNaatu wins Best Original Song at the #GoldenGlobes

Omg such a proud moment!!! 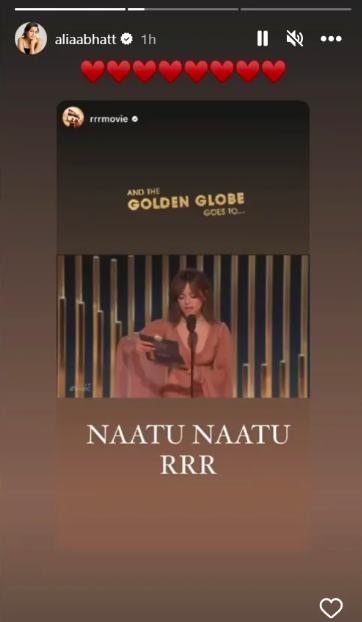 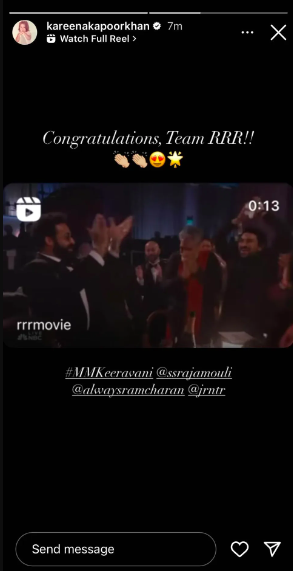 TBH, we’re all extremely elated that RRR has bagged this win. It’s a proud moment for the entire country as ‘Naatu Naatu’ brings home a victory like none other.