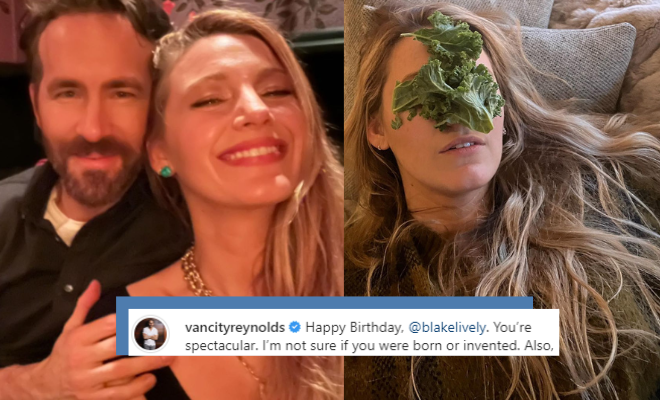 That one celebrity couple that I consider to be true couple goals and the benchmark for love is Ryan Reynolds and Blake Lively. The two have been married for 10 years now and their relationship is what every healthy relationship should be like. Ryan is Blake’s biggest and loudest cheerleader and he has never shied away from proving the same! From hyping her up on social media to just supporting and showering love on her every chance he gets, Ryan has set the bar so high that women now find it hard to settle for anything else. You must be thinking that I am exaggerating but I am not! His past interviews and Instagram posts dedicated to Blake are proof of it!

What fans look forward to the most are Ryan and Blake’s birthday posts for each other. And since it is Blake Lively’s birthday today, her dear husband took to his Instagram handle to share a series of pictures with and of her to wish her a very happy janamdin. Plus, the caption of the post has our hearts!

Ryan shared several pictures of him and Blake, a couple of which were from their Met Gala 2022 appearance. The photo dump also saw many cute selfies of the two from the time they went on dates as well. But of course, since it was Ryan’s dedication to Blake on her birthday, there had to be one weird picture of her in the carousel! It appeared he had put some lettuce leaves on her face when she was fast asleep and also managed to click a picture of the same.

Also read: ‘A Simple Favour’ Is Getting A Sequel, With Blake Lively And Anna Kendrick Returning. Yes To More Cocktails And Sexy Pantsuits!

In the caption of the post, Ryan wrote, “Happy Birthday, @blakelively. You’re spectacular. I’m not sure if you were born or invented. Also, thank you for urging me to leave the house every now and again (red heart emoji).”

Also read: Ryan Reynolds’ Reaction To Blake Lively’s Met Gala 2022 Dress Reveal Has Tweeple’s Attention And Can We Blame Them?!

If they aren’t couples, relationships and love and every other type of goal, then I don’t know what is!

From Kim Kardashian, Gigi Hadid To Blake Lively, All The Best Dressed Stars At Met Gala 2022