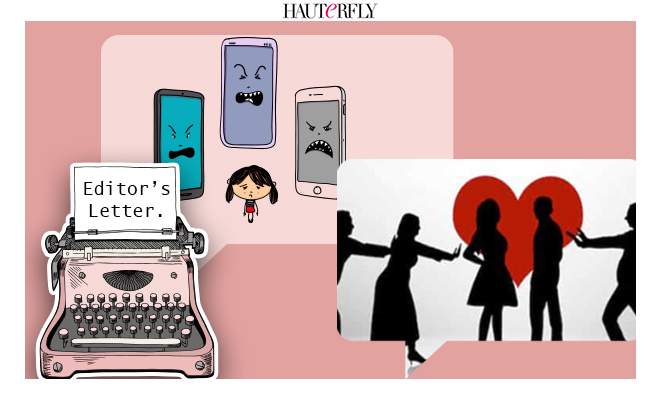 Editor’s Letter: Whoa, What A Roller Coaster Week This Is Going To Be

If Mondays were humans – they aren’t – but let’s hypothetically assume that they are., they would be the kind of person who has a cloud of negativity looming over them. They would be hanging around with a big, dark cloud, they would barely smile and most of us would avoid being around them. But Mondays are not human beings. They are just a day of the week and they go away. Isn’t that amazing? What a way to look at the silver lining. Agreed, I had to really dig deep to come up with something, but hey, I think it’s a good attempt.

Today at Hauterfly, we are heaving a sigh of relief that cyber bullying is being taken seriously. Because women are being threatened with rape on the daily. Just last week, we saw Agrima Joshua being ‘put in her place’ by an idiot called Shubham Mishra. He got arrested so I am going to call it poetic justice. Over the weekend, the men who dropped threats into the DMs of Rhea Chakraborty got put behind bars, where they rightfully belong.

The conversation about nepotism is still going strong. Evelyn Sharma talks about getting replaced because someone wanted their girlfriend in the movie. Why does only one name pop up when she says that? I’m not saying it’s a certain community ‘brother’ but maybe we are all thinking it. Maybe it’s not him. *shrugs*

Ooh, by the way, Republic TV interview Kangana and we don’t know if they are all truth bombs but man, did she drop some bombs. She was going for annihilation. Then again, Kangana is known to stir up trouble. Wait, I put it mildly. Kangana takes a paddle and viciously muddles the pot of trouble so everything comes out frothing and boiling. We talk about that and in detail. Yes, brevity has been abandoned with this one.

By the way, the weekend just went by and I spent a considerable amount on Netflix binge-watching this show called Indian Matchmaking which made me cringe so hard, I think my intestines twisted a little more. Read more about that in our culture column. I promise you it’s fun.

So, that’s what’s coming up today. I will be here, plodding on through this Monday. Let me know if you need me for anything at all, except cheering up. That I can’t on a Monday.