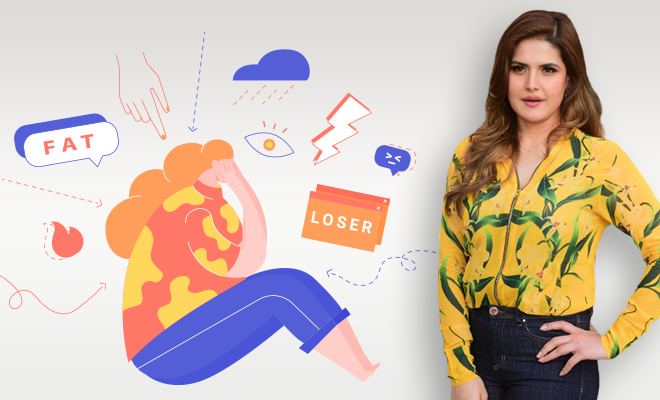 After writing numerous articles about the Bollywood industry, it’s become clearer than ever that to succeed there, you have to completely adhere to society’s unrealistic expectations of beauty. It’s shameful, really. Our entertainment industry doesn’t take two seconds to label and typecast the actresses that aren’t tall, thin, slender and fair. Yes, it’s unfair but that’s the unfortunate way the cookie crumbles. So many actresses have talked about how they were disregarded, body-shamed and ridiculed because of their weight. Adding to that list, we have Zareen Khan. She said that neither the industry nor the audience ever gave her a chance because of her weight and her uncanny resemblance to Katrina Kaif.

Zareen Khan made her Bollywood debut in 2010 opposite Salman Khan in the movie Veer. However, she never managed to cement her place in Bollywood because people never really got over her resemblance to Katrina Kaif. Zareen was more popularly known as Katrina’s lookalike than for her work. And according to her interview with TOI, no matter how hard she tried, she couldn’t get out of that typecast and change the narrative.

Zareen Khan told TOI, “Yes, in the beginning, it was the whole lookalike thing… Honestly, I don’t even know from where it had creeped out. Even before my pictures or my interviews came out, a random picture, from my Facebook account, was being circulated with claims that she looks like Katrina.” She further added, “Back then, social media was not as powerful as it is today, and we were majorly dependent on media houses and newspapers. So, I somehow feel that the public was not really given a chance to see me and have a perception of their own. It was fed to them as gossip. Our audience is also a little gullible that way, believing whatever they are fed instead of forming their own opinion.”

Also Read: Zareen Khan Spoke About How She Had To Start Working After Her Father Left Them. We Have So Much Respect For Her Struggle

In the same interview, Zareen also said that it wasn’t only the Katrina Kaif-lookalike image that held her back. She was also judged and harshly criticized for her weight. Despite losing 40kgs, Zareen was incessantly fat-shamed and even called ‘Fatrina’ on occasion. She also revealed that all this bullying had a lasting effect on her mental health and she always feared she wasn’t good enough.

Zareen Khan told TOI, “I was called ‘Fatrina’. Even when I went out for events, nothing good was ever written about me; they would talk only about my weight.” This is so horrible. Bollywood isn’t a stranger to fat-shaming but this is excessively mean.

We really need to let go of these unrealistic beauty expectations and give everyone a chance. Zareen Khan lost out on opportunities, all because she looked like an already established actress, and that’s extremely unfair. We are glad that all this didn’t break her spirit though!

Zareen Khan Gets Candid About Body Shaming And The Horrors Of The Casting Couch. We Are So Enraged