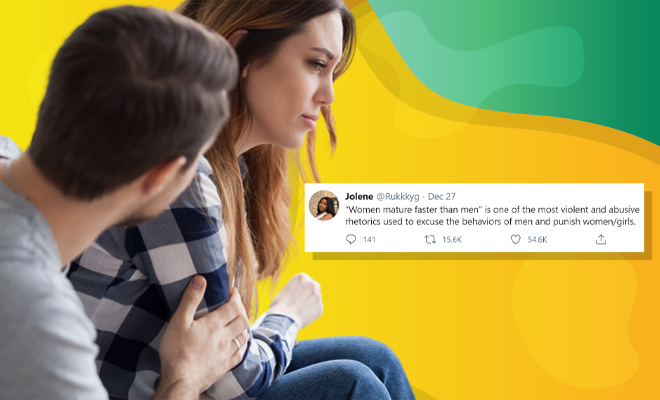 If I had a penny for every time women’s own biology was used to put these down, I’d still not be as powerful as the richest man in the world. Because the society would still find a way to put me down. The problem isn’t that my biology is limiting, that I am the weaker sex, but the fact that society would collapse rather than see a woman succeed where a man hasn’t. So when such a travesty does happen, it will go to great lengths to attribute even that to women’s biology. For example, if a man does something wrong, or throws away responsible behaviour to act like a brat towards a woman, the excuse is that women mature faster than men. Therefore she should be the one more understanding. But when it comes to according women leaders the respect and authority they deserve, it’s usually never remembered.

Twitter user @Rukkkyg pointed the same out in her tweet, where she called out how this whole ‘women mature faster than men’ excuse is used to allow men to get away with problematic behaviour. Whether it is a male sibling getting away with their bad behaviour towards their sister, or back home, when really young girls are considered ready for marriage with much older men, with the explanation that while she may be younger in age, she is likely to be the same maturity level as he husband. What’s more, this ridiculous notion suddenly is flipped on its head and turned negative when an older woman is deemed unfit to marry a younger man, because she’d be too mature and he too juvenile for her.

“Women mature faster than men” is one of the most violent and abusive rhetorics used to excuse the behaviors of men and punish women/girls.

With her tweet, @Rukkkyg opened the floodgates to more discourse on the this biased, misogynist outlook as well as other problematic behaviours of men that get excused in a similar fashion.

Someone pointed out how nobody remembers this supposed ‘ fast maturity’ of women when it comes to appointing them in leadership positions. If this saying were really true, then why aren’t majority of leadership positions filled by women? More mature is better decision-making, is it not?

But they don't remember this when it comes to putting women in leadership positions. All of a sudden, they are too emotional.

Fr. How are we born the same time but expected to mature faster?? Like a boy and girl the same age but the boy is excused of many behaviours that the girl could be blamed for🤦‍♀️. Let's unpack

And remember that other annoying statement that women are made to believe in from an early age? That if a boy behaves badly towards you, chances are that he likes you! This myth was busted quite well in the opening sequence of He’s Just Not That Into You, but I cannot believe how it is still something that continues to be taught to women so they can excuse men’s abysmal behaviour!

That narrative needs to be terminated. Teaching (mainly) girls that aggression/violence equates to a boy liking you is extremely problematic, abusive and toxic.

Where the hell did that idea come from???!!

totally. also the concept of telling little girls “that’s not ladylike” when they do something rude. it’s old-fashioned but still a thing I hear. Like, being polite is not just a “girl thing”!

Many pointed out how ‘maturing’ means different things in this context. But mind you, none of them are good. For example, ‘girls mature faster’ could also mean how in some cultures, like our very own Indian culture, girls are taught to cook, clean and run households at a very early age. However, in others, ‘maturing early’ could have negative connotations, in that girls go through a lot of trauma (sexual harassment, abuse, gender bias, etc) very early on in life, while the boys live a very sheltered life.

I find that Africans tend to define "mature" as readiness for marriage.

"Women mature faster than men" cos they have skills like cooking at a much earlier age that make them "ready" 4 marriage. But when it's time for leadership positions, suddenly female maturity doesn't matter

If "mature" faster they mean they lose their innocence, gets traumatic experiences earlier than boys. Then yes. They're forced to handle adult situations so they do "mature" faster. 🙄

Yeah more like "women are EXPECTED TO mature faster than men"

Or even "ARE FORCED TO"

We're denied childhood and adolescence, while men get an extension- usually perpetuated by other women who were forced to mature faster.

The fact that this ‘maturing faster’ is often encouraged in women is another sickening offshoot of gender discrimination.

Alongside "women have a higher threshold of pain as opposed to men" stories we tell girls so they can endure abuse.

We’re just held to more rigid standards and made to grow up faster. Now I do believe on average girls are more emotionally intelligent, which gets conflated with being “mature”, but also is not true for all girls.

Many women shared their personal encounters with this type of bias, and as a fellow woman, it was downright frustrating to read!

I still argue with my mom about the fact that I was 12 watching my infant brother but she bugs about about my brothers being left home alone but they're 14+16. She still says they're boys its different. Ugh.

I have also seen that a lot of girls/women were forced into nurturing and caregiver roles that forced them to mature earlier on. same for girls/women who were sexually abused, which this statistic is grossly high and may be directly linked to this idea as well.

Without a doubt the collective belief that has caused the most damage to me personally. Because when it should have been seen as deeply predatory and criminal, it was seen as questionable instead. We suffer greatly for that idea, when we are too young to identify it ourselves.

Soon enough, there arrived on the thread scene people armed with science and research to back the claim up that women do indeed mature faster than men.

"Girls are stronger in the verbal-emotive area, whereas boys are more inclined towards kinesthetic and visual-spatial activities"https://t.co/s1lhrnA7i0

Culture likely assigns maturity to cognitive abilities and not physical which girls develop earlier than boys.

However, they clearly missed the point of the entire debate (maybe because they don’t mature as fast as women do?). The problem isn’t that we agree or disagree that girls mature faster than men. The point is this is being used as a blanket excuse to allow men leeways in their behaviour. Perhaps holding them down to responsibilities might be a way to ensuring they also develop the right maturity level at the right age, like women do. I mean, is it that hard, really? Or is there no intention of doing it at all?