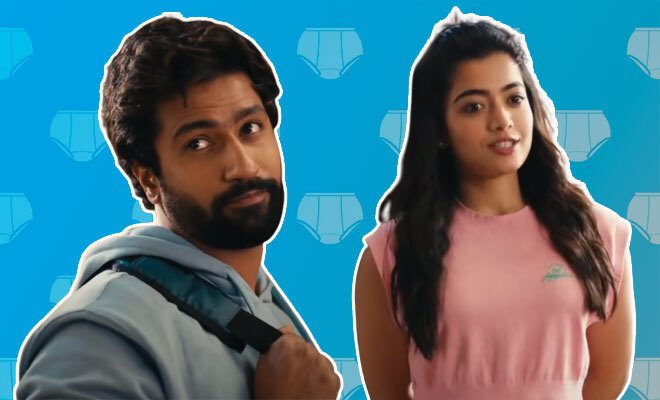 Okay, let’s be honest here, Indian advertisements still have a lot to get right. On one hand you have ads that try to counter the sexist stereotypes by questioning the traditions set by society, such as the Mohey Ad featuring Alia Bhatt, or the Tanishq ad about godbharai. On the other hand, you have ads that continue to adhere to those stereotypes, but put a modern spin on it, as if that’s going to change anything. A recent example is the latest Amul Macho ad starring Vicky Kaushal and Rashmika Mandanna, which has encountered backlash because in its effort to flip the gender bias, it manages to objectify men instead of women. Erm…. I mean, do we need to objectify anyone at all to sell innerwear? I’m sure that marketing teams and content creators of these brands can come up with better ideas, right?

The new Amul Macho ad commercial shows Rashmika Mandanna playing the role of a yoga instructor who is ogling at Vicky Kaushal’s underwear strap and losing the count. A later shot shows her trying to get another glimpse at his waistband as he lifts the yoga mat from the top cabinet.

Bollywood actor Vicky Kaushal and Rashmika Mandanna’s new ad commercial has left the netizens irked. They have taken to social media to call out the ad and labeled it as ‘cheap’ and ‘vulgar’. The backlash received is majorly for the objectification of men. Netizens have clearly stated that objectification of people—whether it be a man or a woman— is not okay. And here the character of Vicky Kaushal is clearly being objectified by Rashmika Mandanna’s character.

Also Read: ‘Katrina Kaif And Vicky Kaushal Are Together’, Harsh Varrdhan Kapoor Blurted Out. They Were Bad At Hiding It Anyway

Imagine the same ad if a man forcing a women to bend and stretch to have a glimpse of her undergarment brand in a public place like gym. Would it not be termed as #sexsualharassment by our #pseudo #feminist and an outrage would have created.
I condemn this ad #MachoSporto

One of the cheapest ads I have seen in recent times…

I don't think any gal will get so excited to see someone's macho… https://t.co/GcOVdb4lDu

However, the backlash itself is flawed in its argument. Yes, agreed that the ad is objectifying men, and that is wrong, just as it is wrong to objectify women. But then can that not be enough to explain why the ad is at fault? What is the need to attack feminism and gender equality in the process to supplement you point? One of the tweets mentioned above how “girls like Rashmika Mandanna are ruining things….” Again, why the personal attack? Can’t your criticism of the ad basis the objectification of a person be a standalone point, without bashing feminism?

This Ad Showing Hindu-Muslim Harmony Was Taken Off After Trolls Accused The Brand Of Glorifying Love Jihad. What Have We Turned Into?