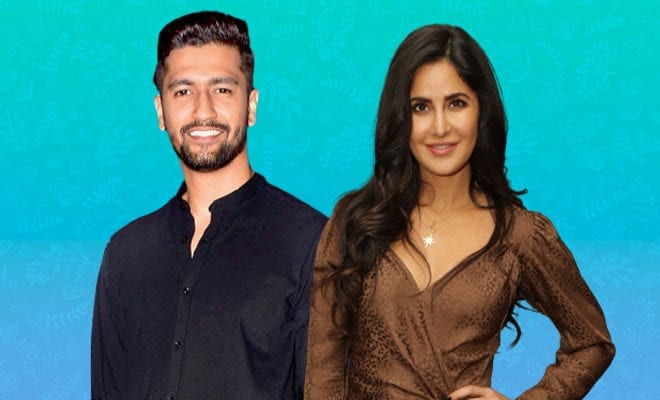 ‘Katrina Kaif And Vicky Kaushal Are Together’, Harsh Varrdhan Kapoor Blurted Out. They Were Bad At Hiding It Anyway

At this point, I feel like Vicky Kaushal and Katrina Kaif are pulling a Chandler and Monica on us. You know, how the couple used to sneak around and then Joey found out. It’s like Harsh Varrdhan Kapoor is Joey, except he ended up blurting it out when questioned. I mean, Joey did blurt out too but only who knows what. Turns out, the Kat is out of the bag now as Harsh Varrdhan Kapoor took it upon him to confirm in clear words that the rumoured couple is, as a matter of fact, not “rumoured” but a real one.

On a chat show with Zoom, Harsh was asked which Bollywood dating rumour is true and he said, “Vicky and Katrina are together, that’s true.” And then he quickly added, “Am I going to get in trouble for it?” Erm, no the couple is going to thank you for revealing their relationship status that they’ve been horrible at hiding anyway. Okay, but the rest of us are genuinely going to squeal at this information bestowed upon us. And if we could ever pick friends in Bollywood, hypothetically speaking, I am claiming the ones who got all the scoop and spill tea, unknowingly – including Harsh Varrdhan Kapoor. There’s also been buzz that Katrina Kaif doesn’t want Vicky Kaushal to do intimate scenes anymore. He has earlier shown on-screen intimacy in Love Per Square Foot and Manmarziyaan.

Recently, ETimes photographers shot Vicky Kaushal arriving and exiting Katrina Kaif’s building; he was there for five hours. Okay, that’s a little too invasive. Let them have their meet-cutes in peace.

Having said that, their relationship has been screaming for confirmation. They have been spotted cozing it up at the Ambani’s party. When Vicky Kaushal tested positive for Covid-19, the next day Katrina Kaif did too. Well, do we need to say more? Even Karan Johar had hinted at their relationship on The Kapil Sharma Show. What the hell, even their car number plates match! Katrina’s is 8822 and Vicky’s 7722. It’s so cute!

Personally, I find their chemistry adorable. The way they have been captured looking at each other is just so cute. We hope maybe someday we can see more of their romance – on screen and off screen!

ALSO READ: ‘Women Should Not Feel Apologetic About Asking For What We Deserve,’ Says Katrina Kaif

On the work front, Katrina Kaif has Sooryavanshi with Akshay Kumar and Phone Bhoot with Siddhant Chaturvedi and Ishaan Khatter in the pipeline. Vicky Kaushal will be next seen in ‘The Immortal Ashwathama alongside Sara Ali Khan as well as Sardar Udham Singh, a biopic on Sam Manekshaw and Karan Johar’s Takht.

ALSO READ: Are Katrina Kaif And Vicky Kaushal Gonna Make It Official? I Mean, They Know That We Know