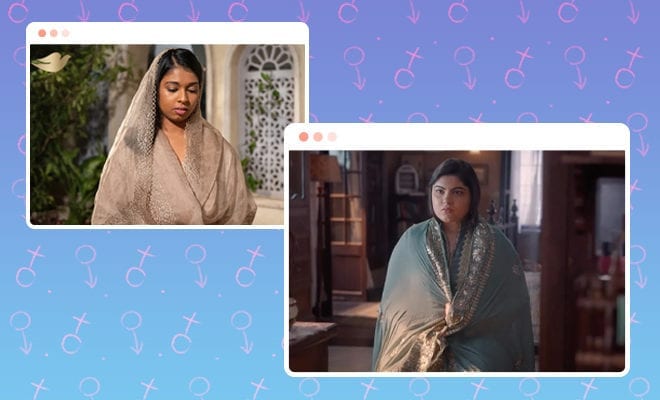 It’s easy to point out the blatant sexism and gender stereotyping in the cooking oil or kitchen cleaning supply advertisements. Or even those men’s body spray ads that show women getting super turned on by a sub-standard scent of a man. That’s all quite overt. But it is the subtle sexism, where a woman sees jewellery and gets convinced to get married or the use of a blue liquid, soft whispering and white pants to indicate periods in sanitary pad ads that insidiously implant stereotypes in our heads. And a recent study by UNICEF and the Geena Davis Institute on Gender in Media (GDI) of Indian ads in 2019 confirm that our advertisements are actually furthering these stereotypes.

And then the few stereotype-shattering ones, like the Tanishq ad, we end up boycotting. Sigh.

The study, titled “Gender Bias and Inclusion In Advertising In India” assessed the role of advertising media in both challenging and reinforcing harmful gender roles that tend to shape up the lives of women in our country. It is the first study of its kinds to conduct such a systematic analysis of media ads. And their hope is that the data can serve content creators to avoid these stereotypes and their reinforcement in the ads they create in the future and be more gender-sensitive in their approach.

Indian women rule the digital ad space, but are they being represented properly?

The combined brains of UNICEF and the Geena Davis Institute on Gender Media analysed the top 1000 most viewed ads on Indian television as well as on YouTube from the year 2019.

Usually the problem in entertainment media is that there is not enough female representation. The problem in our Indian ads, as the study found out, was not that there weren’t enough women in them, but that they were “highly stereotyped.”

The study finds that female characters in Indian ads have a dominant screen time (59.7%) and speaking time (56.3%), only it is being used to project stereotypes. Now counter that with the surprising results of a separate study by GDI in the United States, where women’s screen time (30.6%) and speaking time (33.5%) are both lesser. I wonder which scenario is better then! Does less screen time means less stereotypes get passed around to impressionable minds?

This is not an ad for gender stereotypes, is it? Are we selling sexism?

The study adjudged this based on a few parameters. For starters, a greater percentage of females in Indian ads portrayed as married (11%) compared to males (8.8%). Similarly, when it comes to raising children, they study found that female characters in these ads were three times more likely to be parents (18.7%) compared to male characters (5.9%).

You know that sexist joke about the woman being the Home Minister of the family, right? Well, female characters in Indian ads are twice as likely to make household decisions compared to males (4.9% and 2.0%, respectively).

However, when it comes to making decisions about their future or their career, you’ll see men (7.3%) more often in this position than women (4.8%). Now, I don’t know if that’s just bleak or something that holds up a mirror to the ground reality. It is true the women don’t get much say about their futures and careers, do they? So let’s not give them wings or anything in the advertisements too, shall we?

I love how the study went into such minute detail, because when I read the report, it hit me how much of that sexism we just took for granted. Recall all the ads where women looked slim, trim and fair as Seema Aunty from Indian Matchmaking would’ve called them? And the intense focus on or need for them to look the epitome of Caucasian beauty. “Husn pari”; “sundarta”; “nikhaar” and what not?

Unsurprisingly, two-thirds of female characters in the Indian ads we see have light or medium-light skin tones (66.9%) as compared to male characters (52.1%). Women are also nine times more likely to be shown as ‘stunning/very attractive’,  a whopping 5.9% compared to a measly 0.6% for men. Also noteworthy is that while the men come in all shapes and sizes, and even age, the women have to be young, and invariably thin. Is anyone else thinking of those Imperial Blue ‘Men will be men’ ads or just me?

As a woman, this is probably something you’ve noticed before and are living with the disappointment or this is a rude awakening for you. But don’t curse yourselves for being slow on the uptake because as per our Indian ads, we women aren’t all that intelligent either. And if you didn’t get my sarcasm here, again, not my fault. Because women aren’t even that funny, apparently.

In the event that a character in an ad needs to flex those brain cells, male ones are more likely to be shown as intelligent and smart (32.2%) when compared to female ones (26.2%). And they’re also twice as likely to be funnier than women (19.1% compared with 11.9%).

Well, I don’t know about you, but I am very offended by this insult to my intelligence. These gender stereotypes are so harmful, especially because we live in a society that still sets store by whatever they see on TV. And when it is peddled convincingly by a film star, they’re again more likely to believe in it. Think about this: Indian TV shows are already steeping in sexist content. And then the commercial break too is filled with ads of women behaving like the patriarchal society wants them to behave. The few progressive ads we have either end up offending someone or boycotted. So that’s hours and hours of uninterrupted sexism that’s fed into our brains.

So maybe you don’t consciously believe in gender stereotypes. But these Indian ads might’ve affected you subconsciously.

Fortunately, there are those who are smashing these gender norms and making ads that aren’t just inclusive and progressive for the heck of it, but actually do dispel stereotypes. I recently came across an ad that used women’s love for jewellery and how they see it as an identifier of womanhood used beautifully to showcase a transperson’s journey of self-acceptance. What’s more heartwarming is that they were given the jewellery by their father, which even though plays into the typical ‘family’ angle of Indian ads, is such a fresh take on it.

This study has been quite a revelation, not because we probably didn’t know most of this, but because when you put it in numbers, the discrimination becomes more stark. We need a more gender-sensitive approach in Indian ads, and here’s hoping the Mad Men and Women are listening!