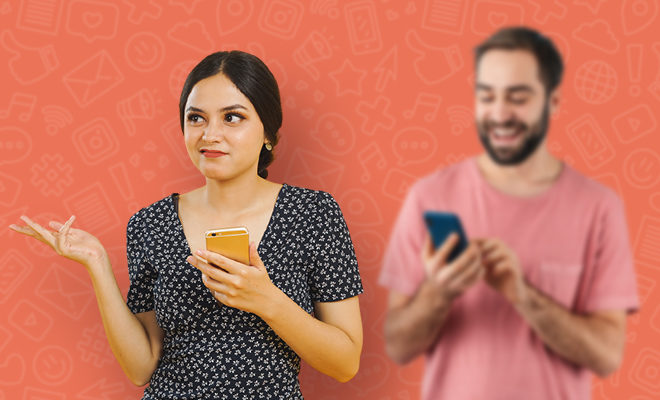 If you’re a woman, you probably second-guess yourself as often as you inhale oxygen. Am I pretty enough for social media? Good enough for this guy? Am I worthy of this promotion at work? Am I good mother? A good homemaker? Are my hopes and dreams as important? Am I behaving ‘ladylike’? For while now, there’s been another addition to this list for me—Was I overreacting to that unknown guy who slid into my DMs on Facebook, Instagram, LinkedIn and asked for friendship in the weirdest way? Did I overreact to the dating app match sending me suggestive texts that caused me discomfort? Was I being too stuck-up? Sigh.

I eventually realised that I was not alone in these thoughts that came to me every time I spurned a guy who tried to get a little too friendly too soon. A fellow journalist friend described to me how within the first week making her Instagram profile public (so she could share her work with maximum people), she attracted DMs from guy friends of friends, who would then get on her profile and like 20 posts at a go. There’s a nifty insights tool that you get when you convert your personal account into a business account. And a coworker remarked how she saw that people had actually ‘saved’ her selfies and personal photos from her profile!

If you think that happens only on Facebook or Instagram, you’d be surprised how often it happens on professional networking platforms like LinkedIn, where some men take ‘mixing business with pleasure’ a bit too literally. They would send you a connection request, and when you accept, start asking you small-talk questions every day. “How are you?” “How is work” “Where do you stay” Or wait, should I say, “whr do u stay” because yeah, they don’t even type properly.

A few months ago, Faye D’Souza had called out a man for repeatedly using the word ‘dear’ while addressing her, simply because she was a woman. But let me tell you, this ‘dear’, which is one of the most obvious identifiers of sexist men, is only the tip of the creepy iceberg. Men have spent great effort in finding various ways, using various new features offered by social media platforms, to approach unsuspecting women for friendship. But they got so lost in the innovativeness of it all, that they forgot basic decency and how it might feel like for a woman to be approached in this manner.

Now I know, I know that there will be cries of, “But how will we know what women feel? Women are so difficult to understand! Hum karein woh sob creepy, but if the guy is hot, you will be okay with it.” And a lot more defensive crap where that came from. So guess what. I am here. I am a woman. And I am going to tell ya.

So men, read up to know all the ways you SHOULD NOT approach a woman on social media because it might be weird, uncomfortable and downright traumatising for them. What’s more, it will defeat any chances of making ‘fraandship’.

1. Type properly and avoid certain words and phrases, like ‘dear’ or ‘how’s u?’

‘Dear’ is the most condescending and creepy word when used in anything but a formal email addressing line. Or as an adjective, as in “You’re very dear to me.” Also, umm buddy, the early 2000s called. And they want the SMS lingo back. Please form full sentences, with punctuation and words that don’t look like a time traveller from Y2K typed it, okay?

Note” Use of emojis to also be done judiciously. Don’t show her your weird right away. Save that for the third date.

Also Read: Hey Men, I’m Not Your ‘Dear’ Just Because I’m A Woman. As Faye D’Souza Said, Be Professional

2. Ask for her consent to video call, send voice notes or send photos

This woman has no idea who you are. Maybe you are a friend’s friend. Maybe you just like each other’s artwork or RT each other’s tweets. But that doesn’t mean you know one another. So please spare her the horror of a video call as your opening move. No sir, that’s downright unsolicited and ill-advised.

Text first, always. Yes, not even call. Remember, we may have made progress but our culture still sucks when it comes to privacy. So even a voice call might be an issue. Just drop a text so she can take her time to reply to you, or decide if she even wants to reply to you.

Voice notes and photos, on the other hand, are very personal, informal gestures we indulge in with close friends and family. So again, if you slide into her DMs and one of your first moves is sending her a voice note or a disappearing snap of yours when she doesn’t even know your last name yet, you are so doomed, pal. She’s going to be super creeped out and block you right away.

Note: Leading with a meme (a static one, not video) might be a fun alternative.

3. Don’t use professional platforms to score women. And ditch that small talk.

Once again loudly for the people in the back, LinkedIn is really not for small talk unless otherwise consented to by both parties. Women already find it very difficult to assert themselves in professional environments, because as I said before, they are second-guessing their authority and their worth in the male-dominated field. Many women are uncomfortable receiving texts that have no professional purpose but are just about ‘chatting’ and ‘gttng 2 noe u” but they might not be able to explicitly shut these down because they think they might be overreacting or being rude or losing a potential connection who could be helpful to advance their career.

The onus is really on you, men that are cruising the hallways of social media, to make sure that when you initiate a private conversation with them, you do it only for professional purposes. Even Bumble keeps its business section separate. You should too.

Note: Again, no ‘dear’. No patronising. And no asking for number for friendship. It creeps us out.

Where does your ‘Sakht Luanda’ vibe go when you’re simping and liking 20 posts on the girl’s account at one go? Do you seriously not realise just how creepy it is? We know everyone stalks and lurks on social media, but do we need a receipt of just how desperate you are to get our attention? Maybe just drop a text, talk a little, and then when she knows who you are, she won’t get so uncomfortable with it!

Note: Just because a woman’s profile is public, it does not give you the right to hound it with everything you’ve got. It’s counterproductive.

5. As romantic as it sounds to you, don’t make “u r butiful, wanna b frnds?’ your opening line

This is a rookie mistake that a lot of men make, not just in DMs but on dating apps too. I open my matches and there’s always that one match in ten who has written an entire essay on my beauty. On Facebook and Instagram before, most girls would turn away message requests with “I’m sorry I don’t talk to strangers.” But men have evolved, and now come prepared with a speech of how they know “you don’t talk to strangers so hi my name is xyz, I study/work here and live here. I like so-and-so shows. See now we are not strangers, right? Now can v b frnzz?”

Yeaaaaaah, no. Don’t do this. Sure, a simple ‘Hello’ on social media might not always get you a response, but don’t wait for the girl to ask you the context of your message of the purpose of your friend request. You found her through a ‘Suggested Friends’ carousel? She’s a friend’s friend? You want to ask her about her job, or another friend, or a particular topic that she might have information on? JUST. TELL. HER. Give your opening message some basic context—that is not an essay on her physical beauty—and let her make an informed choice of whether she wants to respond to you or not.

If you follow all these dos and don’ts, and she still doesn’t respond or feels uncomfortable, that doesn’t make her a bitch or vapid or a snob. If you don’t follow them, and she shuts you down or takes offence, that reaction is very much valid and not an overreaction. Women constantly have bad experiences with men and no wonder, we’ve cultivated this paranoia and inbuilt radar that can detect the purpose of your “Hi dear” texts to us. Maybe you were genuine in your intentions, but you cannot blame women for suspecting some foul play and protecting themselves, because we’ve been burnt too many times.

That being said, chances are, if you just follow these etiquettes sincerely, and are thoughtful and mindful of women when you approach the, they will at least not send your effort-filled text straight to trash.

I’ll Be Swiping Left On Dating Matches With ‘Apolitical’ In Their Bio. Here’s Why It’s An Astute Choice