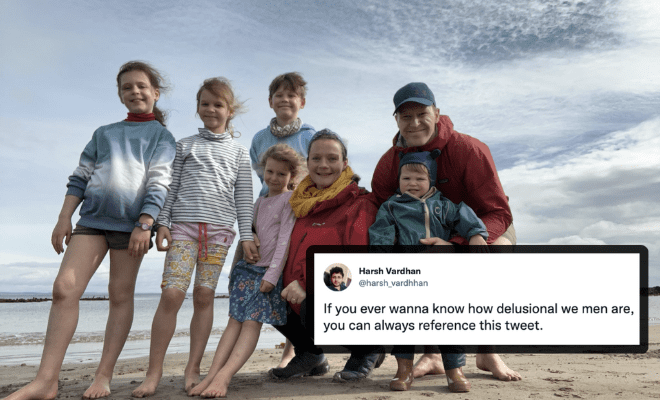 Just a few days ago, I came across a LinkedIn post of a man trying to glorify his wife’s double burden and hailed her for “multitasking” in an appreciation post that reeked of male privilege. Even in today’s time we live in a world where men sit in their comfortable privileged place and pen fake AF appreciation posts for their “hard-working” and “multitasking” wives instead of getting their asses off the couch to actually lend them a hand. And then we have those who conveniently forget to credit their wives for taking care of everything so that they can have a smooth and comfortable work life. These successful men will credit everything from their education to their smart work for a seamless work-life balance and inspire the world but they’ll forget all about their wives who have been literally holding the fort all on their own. Recently, the CEO of a firm and a PhD holder took to Twitter to share his success story and his secret to keeping it together while adding that he is a CEO and a father to 6 kids but what he forgot, was to thank his wife who not only manages the 6 kids but also takes care of their home so he can achieve professional success. Kaafi humble.

In a now-deleted Twitter thread, Tobi Emonts-Holley shared how he does weekly reviews, checks messages and makes a to-do list and plans his day in order to keep up with the fast-paced life and the world. Now, from his tweets, one would assume that this man is a single father taking care of his 6 kids on his own while climbing up the ladder of success but we all know how internet sleuths are. Tweeple dug through the man’s tweets to reveal the real secret behind his success that he forgot to mention – his wife. Going through the man’s Twitter feed, you’ll see several pictures of him with his kids and tweets about fatherhood and babysitting but hardly anything about his wife, making it seem like he’s a single parent. And Twitter was quick to call him out on his sexist behaviour and underplaying his wife’s hard work and labour.

While several users pointed out how their wives have been their support system, others asked if this man’s wife has life goals and checklists of her own that remained unfulfilled as she was busy enabling him. Several users slammed him for writing a thread that is all about him and his male privilege. Other pointed out how he has a “slave” at home who does all the unpaid labour and heavy lifting needed for him to climb the ladder of success.

Over the past eight years, I've barely held it all together.

Without my wife encouraging me, I would have quit.

And I've found friend's who reach out to check on me. https://t.co/MsmUs1ENwI

I want to see his wife’s checklists. Her GCal. It's so telling when partners who enable and support our success aren't seen as part of the equation, but only as an “add-on” https://t.co/ZQd2VB4ote

"How I got to do what I loved while my wife is at home doing all the housework/parenting
How being a MAN has gotten me everything I ever wanted a thread"
Is what you should've said then my expectations would've been MUCH LOWER 🤣 https://t.co/KZoq0DrPpN

I repeat marriage is a scam for woman. https://t.co/AqSdn75J5M

The secret? Having a wife that does ALL of the free labor that comes with parenting and running a home while you chase your dreams without even thanking her.

Imagine how much more successful mothers would be if we had someone we exploited at home https://t.co/ccfuxlx36O

Netizens also seemed enraged by the fact that this man who barely contributes to his home has chosen to have 6 kids and made his wife go through all the pain and trouble. But TBH, I don’t think we should be talking about that. We cannot speak for the woman in question here.

His wife has 6 kids which means she spent 54 months pregnant. She is a stay at home mom and she does all the child rearing. He bragged about seeing her clean his children's room while she was 36 weeks pregnant and he just watched. She does all the work. That's how he does it. https://t.co/WfY4VivhZD

But this tweet quoted by the user here is really problematic.

This one small hack will change your life: be a dickface. https://t.co/PzzTRrIAtb pic.twitter.com/6j9LivRHjv

Im not taking advice from anyone who watched their 37 weeks pregnant wife clean the kids bedroom and instead of telling her to rest and take over, they watched her and tweeted about it.
Your wife is a saint and you don’t deserve her. https://t.co/pECHTGm2zP

Also Read: Hautetalk: Man Shares Appreciation Post For His “Multitasking” Wife On LinkedIn. Can Men Help Instead Of Glorifying Double-Burden?

Several Twitter users also suggested that the woman prioritise herself and others suggested that she go on a vacation for a week and let him be the father that he is and learn the real secret behind keeping it under control.

This thread is exhibit 98756643335 why I say women need to always prioritise themselves. His wife having disproportionate responsibility for child care & “holding it down” is a footnote & after thought as he gives props to himself for things he couldn’t have achieved without her https://t.co/Q8SOq7bowB

Listen, I don't want to add to the pile-on (except I do), I'd just like his wife to take a solo vacation for a week and leave the kids home with daddy. He does not yet know the *real* secret to keeping it all under control, but he will learn very quickly. https://t.co/jNYoYsRLQr

This guy really wrote a whole Linked In-ass thread about the secret to his success without using the word “wife” until the ninth tweet. The patriarchy remains undefeated. https://t.co/SFQlIVNrqZ

While many many many relevant points have been raised regarding this absolute potato of a person, what no one has mentioned here is that he spends ONE night a week with his wife. Might as well just schedule a sex worker and be done with it. https://t.co/5I0DTgGtyf

Well, we’re not surprised that he deleted his Twitter thread. I mean, he really had that coming. It’s funny how such privileged men choose to ignore their privilege and take the contribution of women for granted. We have a man here who has gained success and he has found an effective way to make the most of his time but it’s appalling that he forgot all about the fact that he has that much time on hand because his wife is handling the tantrums his kids are throwing and cooking and putting food on the table and cleaning up after him to ensure that he has nothing to worry about. This man forgot the fact that he has the luxury to climb the corporate ladder because his wife has been his rock and has given him the luxury to do it all without having to worry about the other things in his life. And no, his now-deleted half-assed apology does not suffice.