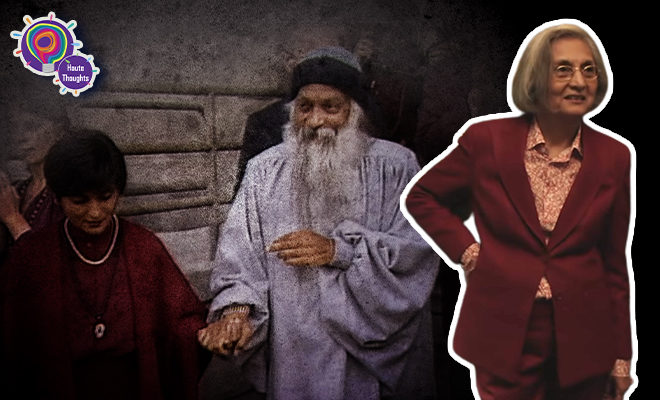 5 Thoughts We Had About Searching For Sheela Trailer: Ma Anand Sheela’s Bid For Redemption Has Been Cast

When Wild Wild Country dropped on Netflix, one name that perhaps got more attention than cult leader Osho Rajneesh himself, was his top aide, Ma Anand Sheela. And why wouldn’t she? Her story began as “a young girl from Gujarat” who eventually became a cult leader’s right-hand woman, then a criminal and eventually a pardoned convict who held many secrets about her time in the cult close to her chest. There was a certain fascination surrounding her, and her sassy demeanour in those interviews was enough to make people want more of what she had to say. Well, we finally get her side of the story in the documentary Searching For Sheela, produced by Karan Johar’s Dharmatic Entertainment, the trailer for which dropped on Monday.

The official synopsis of the documentary-film says, “Osho’s controversial and sassy ex-secretary, Ma Anand Sheela returns to India after 34 years of exile and people just can’t get enough of her. Searching for Sheela is an intimate look into her journey across India, observing the rebranding of her as a pop-culture icon, with audiences unable to decide if they deem her a “criminal” or remain in awe of her badass secretary days.

Sheela, now frail and 70, in the twilight of her life, appears to be seeking redemption, but is she? And if she is, does a world consumed by spectacle allow her the space to?”

Speaking about the documentary, executive producer Shakun Batra talked about how it is more of an observational piece than an investigative piece.

“I have always been very intrigued by Sheela’s extraordinary life and through this documentary we’ve shadowed her as she traveled to India after almost 35 years. This is not an investigative piece, just an observation of a person who has had a questionable past and has always lived life on her own terms. We trace her journey as she grapples with society’s expectations of an ex-convict and attempts to re-brand the public opinion of herself. Searching for Sheela is a documentary that tries to get a closer look at one of the most sensationalized personalities in India…”

Here are five thoughts we had about the Searching For Sheela trailer:

1. The trailer does a pretty decent job of rousing curiosity about who the real Sheela is

Sheela pleaded guilty in the ‘1984 Rajneesh bioterror attack’, served a paroled sentence in prison, and has since then moved to Switzerland, where she has built a whole new life there. While the bioterrorism incident was addressed in Wild Wild Country, there’s still a lot more about Ma Anand Sheela that remains unknown. For example, does she suffer from any remorse or guilt? How has life been like for her post her release? What are the feelings she now harbours for Osho Rajneesh? What could prompt someone to do all of this for a leader who does not return their devotion?

I’m hoping these questions do get answered in the documentary.

2. The candour Sheela brings to her conversations is undoubtedly going to be the highlight of Searching For Sheela

In the trailer, we get to see a glimpse of Karan Johar’s interview of her, where she talks about how Rajneesh too had feelings for her, despite which, her love was unrequited. It is immediately followed by shot of a woman telling her that she had guts to speak up so openly about everything. But it is the manner in which Sheela talks that steals the show every time.

All the controversies stirred and her revelations aside, I think it is Sheela’s sass and candour that will be the USP of this film.

3. Ma Anand Sheela tells Karan Johar that she has bigger scandals than the film industry. We’re keeping our eyes and ears peeled for this one.

Cults and cult leaders like these are bound to have multiple skeletons in their closet. If real life and Wild Wild Country aren’t proof enough, just pick up Sacred Games or Ashram! I am most excited to see what bombshells Ma Anand Sheela plans to drop about her life and Osho Rajneesh in this documentary and if we get any tea spilt about these startling scandals that she tells KJo she has dough on.

4. As most autobiographical films and even documentaries go, this seems like a bid to seek some sort of redemption for Ma Anand Sheela.

I mean, they’re posing it as an open-ended question, but come on. What is the motivation for someone to open their life to so much scrutiny if they aren’t at least getting an image makeover out of it, right? But I guess, what I have learnt from my experience with shows like Fabulous Lives Of Bollywood Wives or The Big Day is that if you’re going to present a controversial perspective, at least make it entertaining.

5.  It will be interesting to see whether she gets accepted in all her ‘grey’ glory or outcast for it.

Despite Ma Anand Sheela’s history, and this documentary being a ‘he said, she said’ narrative, there’s no denying that gender plays a huge role in public approval. Many controversial public figures have been easily ‘forgiven’ or their crimes downplayed by the masses, because of them being men. As opposed to women, who are perhaps levied a much more intense scrutiny and not so easily absolved.

It’ll be interesting to see how, thus far, and post the release of the documentary, how gender shapes up Sheela’s journey.

Searching For Sheela will release on Netflix on April 21, 2021.