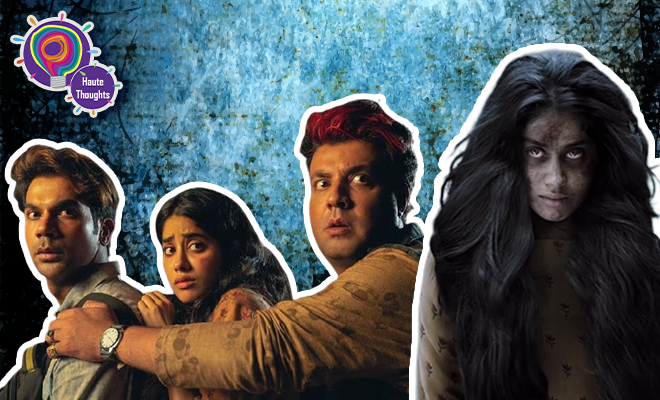 5 Thoughts We Had About The ‘Roohi’ Trailer: This Horror Comedy Could Be A Fun Spiritual Successor To Stree!

The thing about the horror genre is that physical scares aren’t all that scary anymore. Look at us, we’ve enough IRL horrors in our world to be scared by prosthetics and jump scares. And that’s where sub-genres like psychological horror and horror-comedy come into the picture, often with an undercurrent of social issues that need to be portrayed on screen in an engaging manner. After the immense success of Stree, the makers are back with another film, Roohi, that’s a horror comedy on the streets with a social message in the sheets. The film, whose trailer dropped today, stars Rajkummar Rao, Varun Sharma and Janhvi Kapoor, and is directed by Hardik Mehta, of Kaamyaab fame.

According to the official synopsis, Roohi is set in a fictional town of North India, where there is a folklore of a ghost who abducts new brides. Two small-town boys Bhaura and Kattanni find themselves stuck in a forest with Roohi. And the insidious spirit seems to be following them with feet turned backwards. The film comes with a tagline “Mard Ko Jyada Dard Hoga”, which might indicate that we’re in for another sucker punch for men who exploit women and do not treat them with respect.

While Hollywood has been ruling the horror-comedy genre with films like Get Out, Us, Ready Or Not and so on, back home it’s got more takers in the South Indian film industry, with films like the Kanchana franchise and so on. Of the most notable Bollywood horror comedies, I can think of Bhool Bhulaiyya and Stree off the top of my head. The recent Laxmii, a remake of Kanchana 3, really tried, but failed because the comedy was often too slapstick and not sharp and witty enough to deliver serious messaging through punches. If you recall, Stree had actors like Pankaj Tripathi and Vijay Raaz, who are masters of this art of saying the profound by keeping it simple.

My hopes, from the trailer are quite high considering the people who’ve worked on it. So here are five thoughts I had about the Roohi trailer!

1. Rajkummar Rao is often enough reason to want to watch a film, but this one has Varun Sharma too!

I think Rao has incredible comic timing, especially when he’s playing those ‘shy guy’ characters. Remember the Badass Babua from Bareilly Ki Barfi? Or “Bicky Please!” from Stree? You can see glimpses of Rao’s character being a total scaredy cat when he sees the ghost and tries to tell his friend about it. Which brings us to Varun Sharma, aka Choocha from Fukrey who, with that innocent face of his, is the perfect guy when you want to go crazy. Together, these two actors might make for a pretty cool pair with hilarious antics.

2. Roohi will be Janhvi Kapoor’s second horror stint, and I am eager to see her performance.

I had a very lukewarm opinion of Ghost Stories on Netflix, but one of the things that I did appreciate was Janhvi Kapoor’s performance. She too has this air of innocence around her, and from the trailer, feels quite helpless when she gets abducted by these two boys. Which would make it even more interesting when she gets possessed by a ghost and becomes the most powerful of them all! Eager to see what she brings to this role. Besides, playing a possessed person and making it look genuinely scary is not an easy act.

Also Read: 5 Thoughts I Had About Netflix’s ‘Bombay Begums’ Trailer: Pooja Bhatt And The Begums Exude Power And We’re So Ready

3. I’m here for the dialogues like ‘Kya bluetooth transfer chal hai bhooth ka?” and that horror spin on “Palat” from DDLJ!

I know to some it might seem like we’ve had an overdose of movies set in small-town India. But personally, I enjoy it! It also makes sense, since urban India battles different kind of monsters, while the old ghost stories and folklores still have a home in the hearts of rural India.

But what this also gets us is a lot laughs, with dialogues like ‘She-Hulk’ and ‘bluetooth transfer of bhoot’! Not to mention, that ‘palat’ spin on your trademark ghost headspin is aces! I hope there’s more such dialogues (writer: Mrighdeep Singh Lamba) where that came from.

If you haven’t watched Kaamyaab, starring Sanjay Mishra as a washed up side actor who’s given a second chance to regain his fame, you probably won’t get why I am excited to watch what director Hardik Mehta has in store for us with Roohi. While Kaamyaab was a brilliant film and Mehta’s directorial venture, he has also written for Amazon’s Paatal Lok, co-written Trapped (starring Rajkummar Rao), and is also a National Award-winning documentary filmmaker for Amdavad Ma Famous. Mehta is a good storyteller that knows just how to deliver the message to his audience. And that makes me hopeful for whatever social message Roohi has for us.

Also Read: Step Out Review: Neha Dhupia’s Short Film Is A Reminder That The Staying In During Lockdown Wasn’t Safe For Everyone

5. I know, far off thought, but I wonder how they’re going to end the film!

Okay, sure, the film hasn’t even released yet but I am worried about he ending. But it is only because I remember the confusion and ensuing debate that happened after people watched Stree’s open ending. For many people, understanding or not understanding the ending decided whether they liked the movie or not. So you can imagine why we’re curious to see what Roohi is all about, but more importantly, how it leaves us. Hopefully, with an impactful message that men need to stop messing with women?

Also, will we get a cameo from Stree? I mean think of this as the start of some ghost cinematic universe!

Roohi will release theatrically on March 11, 2021.

5 Thoughts I Had About Parineeti Chopra’s The Girl On The Train Trailer. Can It Intrigue Those Riding The Train A Second Time?