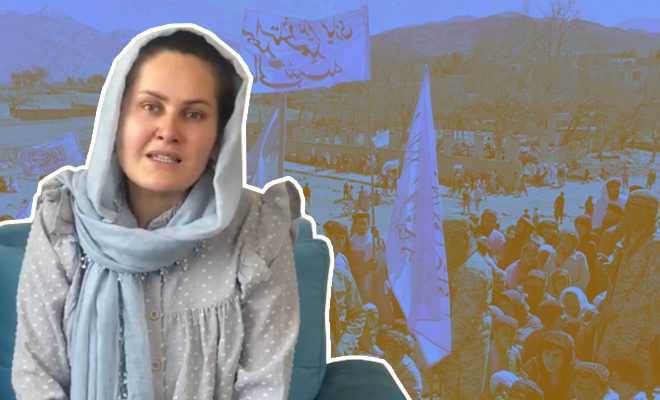 As Taliban Takes Over Afghanistan, Filmmaker Sahraa Karimi’s Video Is Just One Of The Many Pleas For Help From Afghan Women

As I sit to write this, my fingers backspace more than they type words. The visuals of what is happening in Afghanistan right now, and the terrifying possibilities of what could happen to its people now that the capital city of Kabul has fallen are so potent that I don’t think words could do justice to describe the situation. And yet, for many living worlds away and powerless, our words and our resources are perhaps the only power that we can wield to amplify the messages coming out of Afghanistan. As the country slips under Taliban control in the wake of NATO and US troops withdrawing, the futures of its people, particularly Afghan women, have also slipped into darkness. From regression to a rule where women had zero agency, no opportunities to step out of the house for education or work, strict dress codes, to being forced into sexual slavery and punishment, the fates of Afghan women are in serious jeopardy. And many of them have been sending out pleas for help, lest their freedom of speech and expression, or even their right to live, be snatched away from them in this new Taliban state. One of them is Afghan filmmaker Sahraa Karimi.

Karimi is the first woman director-general of state-run Afghan Film. On Sunday, as the Taliban entered the Afghanistan capital of Kabul, Karimi was in a bank to withdraw some money. But soon, she and everyone else had to be evacuated as the Taliban forces took over the city, thus ensuring their complete control of the country. Sahraa Karimi had been posting about this on social media since a while, but on Sunday, she posted a video of herself asking the world to come to the rescue of the people of Afghanistan, and the women especially, who’d most likely be stifled without their freedom and even killed. In the video she has posted, you can see from her POV, as she runs on the streets of Kabul, the utter chaos and the sirens blaring in the capital.

Sahraa Karimi had just days ago posted a message on her Instagram, appealing to the film communities and cinema lovers across the world, to save Afghan women filmmakers, creators and future artists from being shut down.

Karimi’s message was amplified by many across the world, including Indian filmmakers like Anurag Kashyap.

After posting the video of the streets, Sahraa Karimi posted another video of herself, looking at the camera and desperately seeking help from the people of the world to take some action and save them from terrible fates.

Taliban surrounded Kabul, I were to bank to get some money, they closed and evacuated;

I still cannot believe this happened, who did happen.

Please pray for us, I am calling again:

Hey ppl of the this big world, please do not be silent , they are coming to kill us. pic.twitter.com/wIytLL3ZNu

Karimi is not the only one seeking help. It’s spine-chilling as we watch on the news the fall of Kabul and the rise of the Taliban-controlled state of Afghanistan, and an exodus of its people as they cling to airplanes and try to get out of the country. But at the same time on social media and news channels, there are thousands of people expressing their urgent concerns over what could happen to the women in Afghanistan now, none of whom were seen in the airport video that has now gone viral, and what can be done to help them in any way possible.

Where are #AfghanWomen 😰
Can’t see any in the video 😓

“Please don’t forget Afganistan, all our great women and their voices. Just present us in a very good way.”@IkaFerrerGotic speaks to Fatimah Hosseini♥️ pic.twitter.com/GdwmFyOsmi

Imagine waking up one day being told your freedom, family, education, work & future has been taken away from you. For 20 yrs #AfghanWomen woke up every morning w this nightmare.
NOW, they are waking up to this reality.
How does that feel?!
YOU have NO idea!#BeGoneTaliban pic.twitter.com/HuchY4KYdd

A couple of days ago, reports claimed that a letter issued in the name of the Taliban’s Cultural Commission, ordered local religious leaders from captured regions to provide a list of girls above 15 years of age and widows below 45 years of age, to be married off to the Taliban soldiers. Meanwhile, in another province, women were barred from going out. The citizens live in fear of the return of the gender rules imposed by the  Sharia law that existed before the 2001 US-led invasion.

There is belief that what is happening in Afghanistan today will put the country back by 200 years. The United States occupied Afghanistan for nearly 20 years, and it leaves now, bringing things right back to the way they were when it invaded. This interview by Mahbooba Seraj, the founder of the Afghan Women’s Network, sums up the anger, fear and hopelessness that many people in this war-ravaged country are feeling right now.

Must watch interview with Mahbooba Seraj the founder of the Afghan Women’s Network pic.twitter.com/ILyFGoN4m1

The fear is legitimate and with Kabul having fallen, it only grows more and more real by the second for the women of Afghanistan. It’s almost paralysing even for us to think of what could happen, one cannot fathom then what Afghan women must be going through….