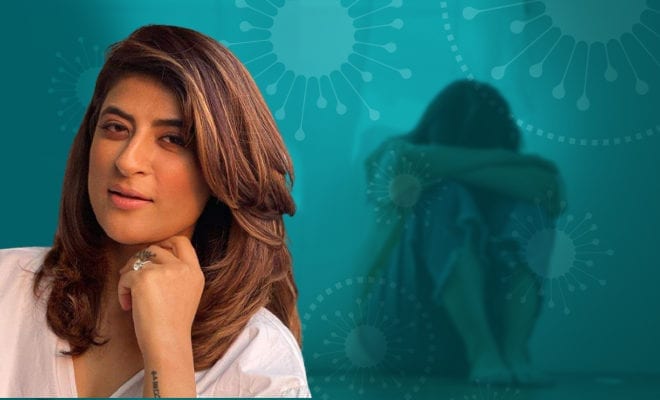 I don’t think any other event in of our time has ever collectively made us feel miserable in the way this COVID pandemic has. My emotions are all over the place, and my mood swings give me whiplash. Most days are bad, because as a work requisite, it is difficult to escape the news of rising cases, deaths and helplessness that’s everywhere in the country right now. Some days are good too, but then you feel guilty for smiling too much, or singing along with a happy song, when you know what’s happening right outside your door. The very dark, silver lining that I see here is that we’re finally talking about mental health seriously. It’s not the way we hoped would happen, but now that it’s happening…. Recently, Tahira Kashyap posted a video on her Instagram talking about having a mental breakdown. And it resonated hard with me.

Tahira Kashyap has been through a lot in the past couple of years with her cancer diagnosis. And through it all, she has always portrayed a strong front on social media, inspiring others to be brave and navigate tough times. But it isn’t always about being strong, is it? Sometimes, you have to show that you’re vulnerable and that’s okay, so that people who follow you and listen to you also know that it is okay to address their emotions, especially the negative ones.

Keeping the toxic positivity BS aside, Tahira talked about being angry and having pretty much a mental breakdown during this pandemic. She took cues from those captions that people often put in their Instagram posts, “Felt cute, might delete later”. Well, Tahira was feeling angry at what was happening around her and she wasn’t planning on deleting the video later because what she said in it needs to be said. And hiding these negative emotions instead of dealing with them does more harm than good.

“There is anger, there is frustration, there is despair, often meltdowns and breakdowns and feeling of being defeated and these emotions never make it to my social media but today I feel like sharing and I don’t think I’m gonna delete it later. I’m sorry for all that we are going through. As much as I want to say I understand your pain I really can never understand and perhaps the same goes the other way around too.”

Tahira further addressed the fact this one particular thought that a lot of us might be having right now. We see the world around us go to shambles, people dying helplessly, losing loved ones, getting laid off, losing their homes and what not. And we end up comparing our pains, feeling guilty talking about our mental health because we think someone else has it worse. Sure, someone else does have it worse, but that does not negate what you, or anyone else is feeling right now. All feelings, all ways to cope are valid. And since everyone wears a filter over their emotions when appearing on social media, Tahira Kashyap requests that we all pray for each other, and conduct ourselves with compassion.

“Some pains are physical some mental not comparing which one is tougher. The battle is on and we’re losing out on a lot of soldiers. But in these times amidst all the feeling that you’re going through I request you to accommodate a silent prayer, some compassion, and a heart to share. We have every right to feel anger, every right to voice your opinion this we must there is no humanity in being delusional. But keep a portion of the day to pray and have a heart to share. Just wanted to share this.”

I love just how real Tahira Kashyap kept this video. There was no preaching about doing this or doing that, nor any reprimands or rants. She just laid out that she has been feeling vulnerable, which so many others also are, and all we need to do is say a silent prayer for each other and weave compassion in our words and actions. Simple, beautiful and effective, and initiating a very important discussion about mental health during the pandemic.

Her message was received and appreciated by many of her friends, followers and industry peers. 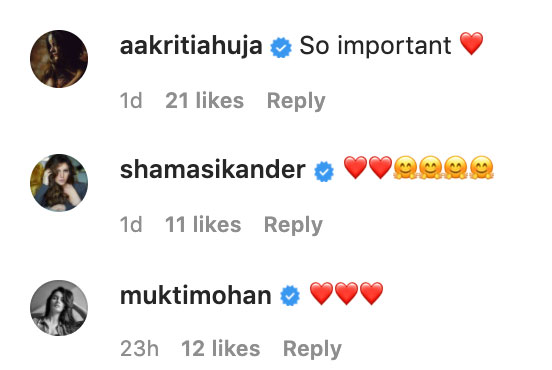 I think it’s the best thing to do right now. Just keep doing your thing. If you’re helping out, then help. Donating? Good work, keep that up. If even all you’re doing right now is staying indoors and wearing a mask, you’re making sure you stay healthy and don’t infection a thousand other people in a chain infection. And even that is a huge help in these desperate times. And if you’re feeling vulnerable, go ahead and do whatever it is that you need to do to deal with it!

Tahira Kashyap Went From Being Insecure About Ayushmann Khurrana’s Lovemaking Scenes To Critiquing Them!