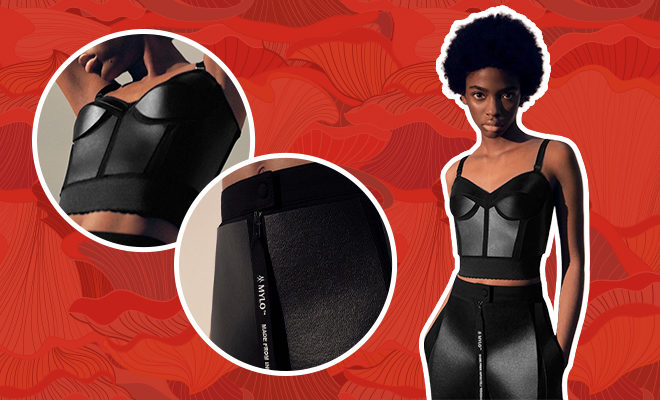 Leather is timeless, sturdy and looks super chic. There is no doubt that the fact that the refined appeal of this natural, animal-derived material makes this a hit in fashion and has been considered stylish for years now. However, regardless of how fashionable and classic leather may be, I would still refrain from wearing or carrying anything that is made from animal skin. And, so would all the people who are sensible towards our cohabitants. We are moving towards ethical fashion practices and ditching pure leather for vegan leather is one of them. One of the many sustainable and vegan alternatives to animal hide is mushroom leather which has been talked about and anticipated to be incorporated in fashion for a couple years now, but finally, the first garment made of vegan mushroom leather was introduced by conscious fashion label Stella McCartney.

On their official social media account, they posted a picture of singer, model and eco-activist Paris Jackson modeling the world’s first garment made of mushroom leather. She wore a black strappy bustier top and trousers, which are not for sale but a prototype made from renewable mycelium – the root system of mushrooms which makes this plant-based leather softer and sustainable than the animal derived leather. The brand wrote in the caption, “@ParisJackson embodies the next generation of eco-activism and material science in our world-first @Mylo_Unleather garments – made from vegan mushroom leather, taking a stand for animal lives and Mother Earth.” We love this sustainable and ethical fashion move.

It is a renewable leather that doesn’t kill animals or harm the planet. The mushroom-based leather, Mylo is produced by a biotech company called Bolt Threads which dropped the first vegan leather handbag in 2018 made of mushroom. German shoe brand Adidas has also collaborated with the company for future collections. Stella McCartney has also expressed the intention to use the vegan material in her upcoming products to take forward the sustainable movement pioneered by the brand.

As written on one of the posts, the brand says, “Unlike most synthetic leathers, Mylo™️ is certified bio based instead of petroleum based. While not for sale, the garments embody the potential of this next-generation material and pave the way for future commercial offerings​.”

Ripping off animal skin for a piece of fashion is the most selfish act humans could be guilty of. I mean, whoever came up with the invention of leather must be a sadist. Plus, pure leather is not only responsible for killing millions of animals every year but the process of turning it into a garment, tanning and sustaining it requires toxic chemicals which are dumped into water bodies, polluting them to no extent.

However, now more and more consumers are being wary and mindful of their sartorial choices and steering clear of wearing animal hides in the name of fashion. Brands realise this and vegan fashion is actually being taken very seriously in the global fashion circuit, rather than just being a buzzword. This vegan leather garment is just the first step to a bigger fashion revolution and we would like more brands to use vegan leather for their collections. Also, it’s on all of us to completely give up pure leather and switch to sustainable and vegan options like the mushroom one.