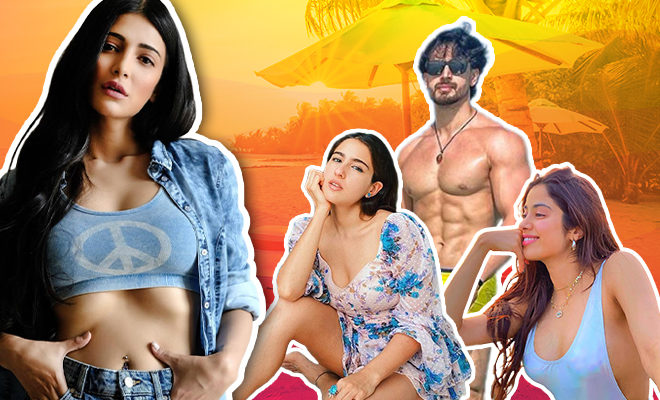 Almost every single one of us lives our lives in hypocrisy. And never more than right now. For example, as much as I condemn celebrities and friends jet setting to Maldives, Goa, Pondicherry, Himachal or even Lonavala and not taking the stay-at-home plea seriously, a tiny part of me wishes I could escape the uneasiness of the second wave of COVID and teleport myself there too. Now I am not saying everyone who travels is a COVIDIOT. That would be a mass generalisation. But I do agree with Shruti Haasan that when celebrities do it, it reeks a lot more of privilege than anything else. And it is indeed quite tactless for them to be posting pictures of their vacays while the we’re losing out to a pandemic.

In an exclusive interview with The Quint, the Pitta Kathalu actor was asked about what she was up to during the pandemic as well as her views on the celebrities who have been sneaking off to the Maldives to cool off while the country faces the heat of a COVID second wave. Shruti revealed that she was busy doing daily chores and is not someone to post luxurious holiday pictures while there’s so much stress going around.

Said Shruti, “I personally didn’t feel it’s the time to go mask-less in a pool. It has been a tough time for everyone, for some people much more. So I think gratitude and being thankful for your privilege is what is most important now versus throwing your privilege on people’s faces. That’s what I think”.

Indeed, that has been the sentiment echoing all over social media right now. Yesterday I was browsing through and sharing a bunch of posts around COVID resources as well as requests from people looking for oxygen cylinders, Remdesivir and Tocilizumab, and plasma donors. It’s something that a lot of influencers like Kusha Kapila, Viraj Ghelani, AndheriWestShitposting, and so on have been doing. But what is even more heartening is that even non-influencers are helping out with the amplification and verifying of resources, because you never know who might get helped by something you’ve shared.

Also Read: 6 Feel-Good Films And Shows To Help With Some Of That Second Wave Anxiety

And amidst all this, I get a Viral Bhayani update that Alia Bhatt and Ranbir Kapoor, both recently recovered from COVID themselves, are off to Maldives, which has become to Bollywood what Switzerland was to YRF movies in the 80s and 90s. Immediately, a thought popped into my head. Could they’ve become plasma donors and then perhaps used their clout to amplify resources? I don’t see Akshay Kumar, himself a COVID survivor, talking about this on his social media. It’s mango season so maybe he is prepping for another interview with the PM.

In fact, most celebrities who were prompt to share their scorching Maldives OOTDs and promote that one fancy-ass resort that everyone keeps going to, have not put up a single post or story amplifying resources and information that needs amplifying.

While stars are still posting throwbacks of their massless sultry faces, bikini bods and six packs from the Maldives, and probably will continue to until the end of this year, there are very different kind of bodies grabbing the attention of the rest of the nation.

But privilege does what privilege wants to do. If it didn’t, we’d not have any more star-kid headlined films now, would we? But here’s the thing. We’re not shaming them for their holidays. Honestly, we do not care and do not have the time to either. But there are a bunch of reasons why we’re being forced to. First, half of Bollywood is COVID positive right now. Some after visiting the Maldives. And no, it’s not like all of these actors are working on active projects right now and might’ve caught the virus from someone at work. So where are they catching it from?

Also Read: Bollywood Celebrities Are Holidaying In Maldives And It’s Their Beachwear Looks That Are Making Quite A Splash.

Second, do you have to post pictures of yourselves from your holiday? Like, really? Now? And not just from the holiday but a throwback a few weeks after? Is that not avoidable? I know Pooja from Juhu is in Goa right now, partying with her ‘homies’ and posting her beach boomerangs too. But see that’s where your celebrity power comes into play. Pooja from Juhu has 1000 followers. She thinks she is an influencer but we both know she isn’t. You, celebs, have followers in millions. What you post affects the mindset, mood, psyche and behaviour of at least thousands. That’s a lot of clout and influencing power wasted on mindless bullshit instead of helping those in need during the pandemic.

Third, I would’ve loved for at least one celeb to have posted a photo with their mask on. Must’ve spent a bomb on those matching designer masks na, guys? So why won’t you flaunt that? The picture is posted from your verified account. Your fans could recognise you in their sleep. Then why is your mask off? If you’re going to flaunt, at least redeem yourself a little by making it a PSA to always wear a mask?

It’s also not just celebrities. I’ve seen influencers who are out celebrating occasions in Goa and created branded content with those fabulous outfits. And while most days I take my shopping inspo and makeup tips from them, now I just want to DM them saying they’re being absolutely devoid of sense and sensibility.

Recently, we saw what happened with Pooja Bedi when she posted a video of herself enjoying on a boat in Goa and asking her followers to live without fear and not spend their limited lives in a cage. When called out, she launched into examples of Taiwan’s herd immunity and what not, while clarifying for people that she wasn’t vacationing in Goa but she lives there. So it isn’t exactly insensitive if your state is a party venue allowing you to do all that while the rest of the country is fighting the pandemic, right?

Joys of living in healthy, happy #goa .
Free your mind #NoFear
Life is meant to be lived…❤ not spent caged and masked for a year/ years in fear of a virus that's clearly not going away!
If you died tomorrow after year of masking/lockdown.. what would ur greatest regret be? pic.twitter.com/ydXG5OGsou

Nope, I’d still say Pooja what is this behaviour? Why? Because sure, maybe what you say has merit, because herd immunity has not been ruled out as a possibility in many countries and some even used that as their only approach to fighting the pandemic and it has worked out for them. But remember what happened to the UK? The number of deaths that could’ve been prevented had the country chosen a different response? Isn’t the whole reason why this virus has us shitting bricks that we don’t know how it mutates and what all damage it is still capable of causing?

So who died and made you the expert of what will work in India? You never know, Goa might just be a catastrophe waiting to happen?

Also Read: Pooja Bedi Shared A Tone Deaf Video From Goa That Has Us And Twitter Asking “Pooja What Is This COVIDIOT Behaviour?

We’ve defended our celebrities enough when they couldn’t take a stand against the government or problematic politics in the country, because of all the repercussions that would follow them. But when it comes to them displaying some sense and not hurting public sensibilities in the midst of a pandemic, they’re, quite literally, at sea! Nobody’s expecting them to post morose content. Or suddenly become relatable AF, because we all know even if Katrina Kaif does pochha in her house, it is not the same. We recently saw a bunch of celebrities post donation requests for a little kid who had a rare condition that required some of the most expensive medication ever. That was commendable, I am sure. So why can’t they also become COVID keyboard warriors and help amplify safety precautions and resources, while NOT inspiring people to go on holidays that might put their’s and others’ lives at risk of infection?

It’s not longer about just envy or jealousy looking at celebrities holidaying in the Maldives or other destinations anymore. It’s about being sensitive to the sentiments of the people who follow them and of using their social media following for good.

Ira Khan Is On Holiday And Almost All The Bollywood Celebrities Have Vacationed In The Maldives. Why Are We Stuck Here?