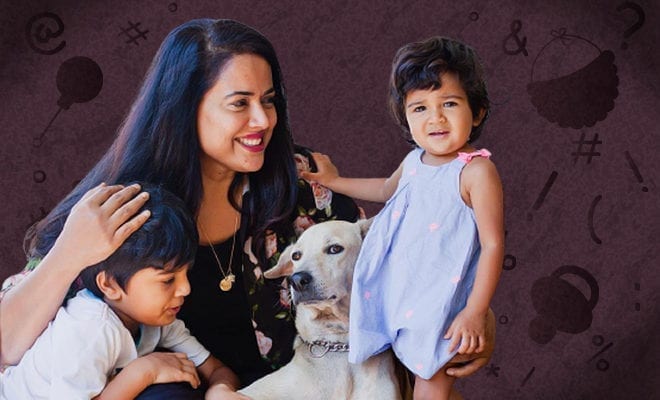 Looking at the world around us, I’ve become increasingly confident that I wouldn’t want to bring a child into this world. But that’s probably not the only reason. See, motherhood scares me, especially having read the accounts of what women go through. And painful labour is only the tip of the iceberg. There are a lot of health issues that women develop postpartum as well, from depression to ailments they didn’t have before, like blood pressure and so on. And sometimes, the precarious psychological health of the mother can manifest itself physically too. Recently, actor Sameera Reddy, who is a mother of two adorable children, revealed how things got really tough after her first pregnancy, and what it took to deal with it and avoid feeling the same during her second pregnancy.

Sameera Reddy is mother to her son, Hans (6), and daughter, Nyra (2). And if you follow her on Instagram, you’d see that she takes pride in being Messy Mama. She doesn’t always know everything, doesn’t always have her life sorted out, and doesn’t always look like she stepped out of a fashionable maternity wear advertisement. But that’s the truth about being a mom, isn’t it? It’s not glamorous at all, but messy. And Sameera reigning in all her Messy Mama glory is truly inspiring for her followers, including me, who are not just mothers but women of all ages, to keep being their authentic selves and not try to match up to the unhealthy, unrealistic standards set by influencers and the entertainment and beauty industry,

But this zen wasn’t easy for Sameera Reddy to achieve. In fact, in a recent interview, she revealed that her struggles with postpartum depression and managing her emotions after her first pregnancy took quite the toll on her. She recalled how husband Akshay Varde took over the baby’s responsibilities while she tried to navigate the difficult times, when nobody, not even she herself, could understand at first why she felt this way.

“My mom-in-law said, ‘Your baby is healthy, you have a supportive husband, why are you upset?’ I had no answer. After I was discharged, I cried; I also felt guilty for not being there for Hans. This continued for a year – I’d break down often. I was completely cut off from the film industry. I still weighed 105 kgs & was diagnosed with Alopecia areata; patches of hair fell out of my head,” she revealed.

Also Read: Sameera Reddy Talks About Her Experience With Postpartum Depression And Equal Parenting. We Love Her For Always Keeping It Real

However, it wasn’t until she sought professional help that she realised a lot of it had to do with some deep-seated issues she had about her own body image, having been a part of the film industry that stresses so much on ‘ideal beauty standards’. She consulted a doctor, who made her aware that her concerns with her weight went as far back as to her childhood, when she was overweight, and how repressing those emotions was affecting her mentally and physically. Sameera reveals that when she came out of this therapy, she felt like a whole ‘new’ person.

“After 2 years of disappearing from everywhere, I joined social media. Even then, I’d be asked, ‘Are you going to be a yummy mummy or will you be ‘Sexy Sam’ again?’ But I refused to live a lie just to get followers! So I started talking about my problems – at first, I was trolled for not looking ‘perfect’ but it didn’t bother me. And in 2018, when I was pregnant with Nyra, I told myself, ‘I’m going to do this my way’,” Sameera said.

And truly, if you see Sameera Reddy now, you might not see the quintessential ‘sexy’ Bollywood actress that subscribes to those unrealistic beauty standards. She flaunts her greys and does videos about dying her hair. She addresses the flab and focuses on being fit, not somebody else’s definition of perfect. What you see instead is a mother who is beautiful inside and out because she isn’t afraid to be her authentic self. And that confidence is quite sexy, if you ask me. I know this because ever since I started accepting my body and moulding my definition of what’s fashionable, beautiful and sexy according to it, I felt that confidence too. And it does change how people look at you.

As someone who might (or might not) consider having children in the near future, I love that we’ve got such role models who keep it real when narrating their experiences. We need more encouragement, especially when it comes to new moms seeking professional help to tackle mental health issues that might arise post pregnancy.