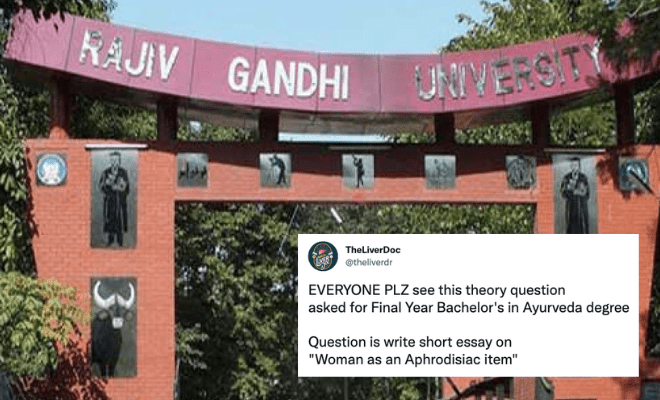 Objectification of women is nothing new in our society but it actually breaks our hearts to see this happening every now and then. More so, when an educational institute ill-treats or shames or objectifies women. And currently, Karnataka’s Rajiv Gandhi University of Health Sciences (RGUHS) is on our radar. A question paper of the final year Bachelor of Ayurvedic Medicine and Surgery recently went viral for all the wrong reasons. The question paper for the subject Kayachikitsa-2 (internal medicine) students were asked to write short essays on 12 topics, one of which was “Stree as a Vajikarana Dravya” which literally translates to women as an aphrodisiac. Yepp, I’m not even kidding. This is real.

Flagging the essay topic in the RGUHS question paper, a Twitter user pointed out everything that’s problematic about the topic as well as the textbooks of the subject that has the answer to the question, which just by the BTW is even more problematic.

Question is write short essay on
"Woman as an Aphrodisiac item"

In the next tweets, I will show the textbook which students of Ayurveda are made to study and the answer to this question… pic.twitter.com/jTsz7DVzIw

Sharing pictures of the “government approved” book on the subject set by the Central Council of Indian Medicine as per the syllabus, the Twitter user pointed out paragraphs where the sentence (in Hindi) says that women are considered as one of the best aphrodisiac drugs. The user further added that instead of teaching the students “progressive, scientific facts” that are useful, the book actually teaches the student a lesson on “how to objectify women into aphrodisiac items and baby-making factories”. The Twitter user also called out the book and questioned if we’re teaching young students “the way of ‘rape culture’ by objectifying women”.

This is the textbook from which students learn Kayacikitsa (or Internal Medicine of Ayurveda) – it is Government approved, prepared according to syllabus by Central Council for Indian Medicine

Are we teaching our young students the way of 'rape culture' by objectifying women? pic.twitter.com/sAVWIZCA0T

The main source is this classical Ayurveda text, written by (THE FATHER OF SURGERY) Sage Susruta

Pathetic we are teaching our kids in India these primal teaching even now, in 2022, asking them to answer such primitive questions! pic.twitter.com/4C7xbJE6H7

This soon led to an outcry on social media as netizens took to Twitter to slam the question paper and called it out for objectifying women and reducing them to objects and baby-making machines. Several users also wondered what it would have felt like for the female students in the class to write an essay on the subject and called for it to be scrapped.

What type of Bullshit teaching is this?
How can Ayurveda be this insensitive about women?
Objectifying women.
Calling Women aphrodisiac item and baby makers. 🤷🏻‍♂️🤷🏻‍♂️ https://t.co/0mI3uezFIu

Disgusting. This course should be scrapped! Anyway these chaps end up faking to be allopathic doctors. Working in ERs and ICUs as duty doctors and running dispensaries and clinics dispensing drugs they aren't even trained to prescribe! And now this? Seriously? Argh!!!!! https://t.co/aHWtxxw1yJ

1. The course & practice is either solely for men
2. Or they are happy with women being 🌈
We would prefer the 2nd one https://t.co/97NJ4TnaHA

Ancient Indian wisdom is regressive and discriminatory to women. #Patriarchy wins always. We need to reject these. https://t.co/i3IwU5ehkz

All the regressive practices which lead to centuries of crimes (rape/honor killing/murders) have been promoted through textbooks. https://t.co/zpq7JFRfNJ

Please read this thread! Students studying Ayurveda are being taught to be misogynistic?!! Has the Ministry of Ayush any idea of this or they doing it on purpose? This is shocking! https://t.co/U5DZoki1Sm

Responding to the controversy, RGHUS was quoted by Times Of India as saying that the questions are from within the syllabus and are in the textbooks. They also justified the question by saying that it is “one of the methods of treatment” while adding that if it needs to be changed then the same has to be done by the Ayush Board.

Now here’s what I have to say about this. Everything with this question and this textbook reeks of sexism and is extremely problematic. To begin with facts, Ayurveda was written back in the day and while it does have great knowledge, problematic things like this need to be changed with time. We’re talking about young impressionable students here and to teach them that women a food or drug that is supposed to arouse sexual instincts and induce desire is not only disgusting and deplorable but it’s also setting a bad example. With this, we’re teaching all young men that women are just sexual objects and nothing more while demeaning every single woman who is studying this subject. Another thing to note is that we are, in fact, promoting rape culture by telling men that women induce sexual desire and pleasure and if the University chooses to justify this question by saying that it is “one of the methods of treatment”, we really don’t know what to say. Are they trying to say that women are used as a “drug” or an “item” to treat something? So, every man dealing with a problem like erectile dysfunction can “use” women to get treated? I mean WTF are we doing here. If this isn’t promoting rape culture then I don’t know what is.

There we go again, teaching young impressionable boys the rape culture and then we hear people crying about how women and their clothes are the real problem.

In 2022, we're still TEACHING the new-gen how to continue the sexism. Some culture and values we're giving them, huh! https://t.co/vxYKucTcQ2

To have female students sit in that examination hall and answer this derogatory question and write an essay on how to objectify their own gender is beyond disgusting. And all this while other male students sitting next to them answer this question. What kind of teachings, values and moral lessons are we giving the new generation with all of this. And after all of this, we cannot sit here and expect the rape cases or statistics to reduce or for the mentality of the new generation to change because the fact is that we are the ones teaching them the rape culture and telling them how exactly they can objectify women and use them as “baby-making machines”.

Japanese Schools Ban Ponytails, Claim It ‘Sexually Excites’ Men. Why Are All The Rules For Women?