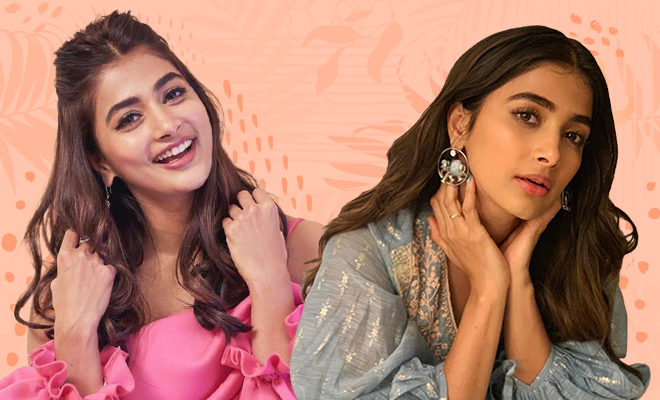 Celebrities always look on fleek, and while we think it’s because of the bus of people who make sure they look good, best beauty products in their kitty and ahem, good genes, there is much more to it. They are just like us. They gather tips and tricks from their BFFs, mom and beauty experts and struggle to maintain the health of their skin and hair. Plus, they are just as reckless and sometimes clueless when it comes to beauty as us. I can say this with certainty because Pooja Hegde just admitted to not swearing by a proper skincare routine, and the reason is she doesn’t feel like it. I know, it’s all of us. But she did drop some good advice and tips that she has been blessed with from her fam and also experts during her years in the industry. While talking to an entertainment portal, she revealed some beauty and haircare secrets passed down from the women in her house and a genius makeup trick that she has learned from industry experts like MUA Subhash Vagal aka Subbu.

When asked about her skincare routine, she was just all of us lazy girls who want no skin problems but without really putting in much effort. She confessed to being the laziest person when it comes to having and following a skincare regime (I doubt that because I am the laziest), but revealed one thing she absolutely doesn’t skip. She said, “All I do is I make sure that I take off my makeup before I go to sleep. That’s something I do diligently.” Apparently she read somewhere that sleeping with your makeup on makes you age faster, which is true, btw. She added, “I take off my makeup no matter how sleepy I am and I moisturize my skin because I have really, really dry skin. I don’t know if this two-step skincare routine is effective but I can relate.

Also Read: Athiya Shetty’s Skincare Ritual For Healthy, Glowing Skin Will Literally Take You Less Than A Minute. And, Just One Ingredient!

It’s kind of hard to believe that she doesn’t follow a skincare regime, because her skin looks fab. The secret behind that is she focuses less on makeup and hiding imperfection and more on letting her skin breathe, apart from good genes, of course. She said, “Over the years I feel I have grown more confident with my skin. I have become like less makeup is better and it’s more me. It’s all been a journey of finding myself. When I used to put a lot of makeup, a lot of people came up to me and said, ‘oh my God, you look so different from what you look on screen’ and that’s something that kind of really stuck with me. I wanted to be myself and eventually I wanted to break free from these crutches of having to portray to be somebody else and always be perfect. So I think over the course of time I’ve kind of just been like less makeup is okay. If I have a freckle or something, it’s really okay. It’s normal.”

Upon being asked about haircare tip that has been passed down to her by her mother or grandmother, she said, “I think the South Indian in me is just gonna say that there’s nothing like a nice coconut oil massage for your scalp. It’s really nourishing and it’s something that your scalp really needs.” She recommends using coconut oil in hair before taking a hair bath as it has really worked for her. “I think coconut oil is so magical. I am a total advocate for it”, she adds. She also mentioned a beauty practice followed by Victoria’s Secret models which involves having a spoon of virgin coconut oil in the morning which helps cleansing skin.” So there, one beauty ingredient that works for both skin and hair. It truly is magical.

At the end of the video, she shared a makeup trick she learned from her MUA which “I learned that you should do your concealer in the end.” Until now concealer has been the second step for me since it is part of your base makeup. But she said that putting on a concealer under your eyes after you do your eye and face makeup, makes it look fresh. “It just looks fresh and that’s something I learned”, she said. I think it is brilliant and coming from a makeup maven like Subbu, I think there isn’t any reason to second-guess.