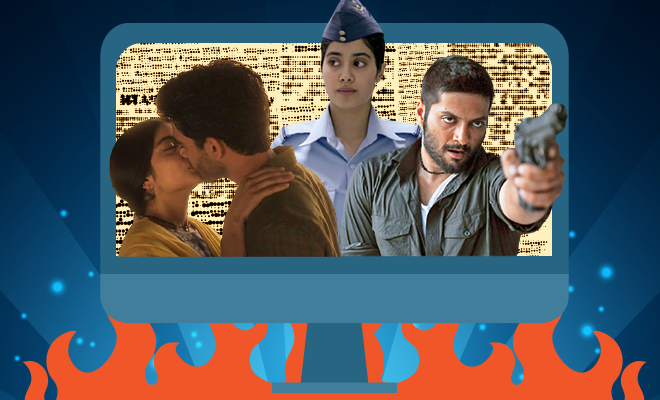 From Mirzapur To A Suitable Boy, 7 OTT Controversies That Sent Twitter On A Boycott Rampage Over ‘Hurt Sentiments’

2020 is a year that hasn’t had much happiness to spread. But yaar, sabke liye toh usko blame nahi kar sakte na! Take, for example, the absolutely ridiculous controversies that were stirred up this year over the content shown on OTT platforms. I mean, we should be grateful that when this pandemic happened, at least we had Netflix, Amazon Prime Video, Disney+ Hotstar, Zee5, MX Player, Sony LIV, Voot, ALT Balaji, Eros Now, and a bunch of other regional OTT apps that kept us entertained and indoors. But nahi, people had nothing else to do so they decided to get offended. After all, taking offence is our national pastime! So from Janhvi Kapoor’s Gunjan Saxena to Amazon Prime’s Mirzapur 2 to Disney+ Hotstar’s Laxmii, OTT releases had a kaafi controversial year!

All of these ‘controversies’, ‘name changes’ and #Boycott trends were a colossal waste of everyone’s time, money and efforts. Hashtags trended, somebody filed an FIR, people talked about it for a while, and then the whole thing died down just as suddenly as it had started. Now I am not saying I wanted them to drag as long as the Karni Sena v/s Padmaavat charade. But the point is, these controversies felt like attention-seeking gimmicks.

Why? For starters, most of the ‘taking offence over hurt sentiments’ was happening at very opportune moments. Take, for example, the controversy with Akshay Kumar’s Laxmii. The fact that the film was named Laxmmi Bomb was well known for over a year. But the offended peeps generously waited all year long to express their outrage? Could’ve just saved the makers some money by outraging during by post-production no? Imagine how much frustration you put the graphic designers and editors through, trying to incorporate all the revisions just because of your lethargy!

Here’s another funny thing that these crusaders who think they’re keepers of our faiths believe in. They think that simply by trending #BoycottMirzapur, they’d be able to stop people from watching the show on OTT. I’d spoken to Shweta Tripathi Sharma during an interview where she made the point that IRL, who’s really going to boycott a cult show like Mirzapur 2 that was so highly anticipated? And let’s say I tweet in support of the boycott. Who’s going to come and check on me, sitting in my room, watching the very show/film I am supposed to boycott on my laptop, while I use my phone to tweet #BoycottNetflix? The numbers say something entirely different! Laxmii apparently gave Akshay Kumar one of his biggest BO (or OTT?) openings. Toh who is really boycotting these things here?

Anyhoo, here are 7 major controversies that tried (and failed) to bog down the release of OTT movies and shows in 2020!

1. Gunjan Saxena: The Kargil Girl and the case of gender bias in the IAF

The film, which was one of the first mainstream releases on OTT, and starred Janhvi Kapoor in the biopic of IRL IAF pilot Gunjan Saxena, caused a major stir upon release. IAF thought that the whole gender bias angle portrayed in the film was false and misleading, with many officers from Gunjan’s time vouching for this not being the case. However, the real Gunjan Saxena continued to defend her stance, that it may not have been a widespread thing, but her own experience was different for her fellow officer’s. Moreover, the idea was not to focus on the bias but to focus on the inspirational story of Gunjan’s flight.

While this happened after the film released, Janhvi Kapoor also faced some negativity from anti-nepotism brigade who thought she was too new an inexperienced in showbiz to be given such a role. The film was a Dharma Production venture. So people alleged that she got the role because of Karan Johar’s love for star kids.

2. A Suitable Boy on Netflix and it’s unsuitable kissing scene that got OTT platforms fearing censorship

Mira Nair must’ve thought her biggest problem would be to convince shippers that Lata chooses the boring guy because that’s how Vikram Seth wrote in his book! Instead, the show dropped in India at a time when Love Jihad and the Tanishq ad were topics du jour. I think more outraged than Lata’s own other in the story were desis who saw the fictional Hindu girl from post-Partition India kiss a Muslim boy. It did not help that they were kissing in a temple premise.

Result? Netflix got free-fund mein boycotted (only on Twitter haan, not IRL) even though the show was for BBC UK! The scene’s still there, and two minister (guess which party?) who probably don’t have important things like constituent welfare to take care of have filed a case which now awaits judgement, like the millions of cases in backlog.

Don’t be smart and use the “But our Khajuraho temple has sex on walls!” or “Kama sutra was Made In India bro!” wala arguments. We tried that already. It’s too OTT for them.

Also Read: Moral Police Now Wants Us To Boycott Netflix Over ‘A Suitable Boy’. Can Y’all Just Stop Telling Us What To Do?

Ironically, these very people will like it when Guddu Bhaiyya will do bagaawat against the oppressive Tripathis on the show. But Ali Fazal offered his support to the anti-CAA protests, and stood in solidarity with people who were questioning the government, and they all suddenly turned Munna Bhaiyya and began doing the #BoycottMirzapur tandav!

But come on! Mirzapur 2 was one of the most anticipated shows on OTT, even more than the COVID vaccine is in India. If you think anyone was going to boycott it over something as silly as this….

4. So downrating the Sadak 2 trailer and trashing star kids was for SSR’s peace or your own vindication?

What I loved most about this controversy was going on Twitter and telling people that they were actually making the Sadak 2 trailer video trend on YouTube, and giving them ad money by simply opening the video and letting the ad play! Even negative publicity is publicity na, bhaisahab!

I have no love for the movie, I didn’t even watch it. But at least it was an informed choice made for all the right reasons. I didn’t wrap myself in the flag of #JusticeForSSR but really just do it all for my own vindication.

Also Read: Alia Bhatt’s ‘Sadak 2’ Trailer Getting 6.2 Million Dislikes On YouTube Is A Frivolous Argument Against Nepotism. It’s Never Just One Actor’s Film, Is It?

Peter Morgan’s The Crown is one of the most perfect pieces of television I have watched. It is so painstakingly, beautifully authentic! And that’s why after Season 4 aired, the UK Cultural Secretary Oliver Dowden fears that “a generation of viewers who did not live through these events may mistake fiction for fact.” Fair enough.

But here’s the thing. What happened in the lives of the British royal family, particularly in the time of Princess Diana’a arrival and tragic departure. has been speculated, biographed and written about so much that almost everyone knows the broadstrokes of what happened. So why do we really need a fiction tag for the show?

Also Read: Princess Diana’s Story On The Crown S4 Made Me Appreciate What Meghan Markle Is Doing Even More

I mean, if you were offended to have the name of your deity associated with a badly made Akshay Kumar film, toh I’d still understand your sentiment. But no, people are offended because how can you use the word bomb and a goddess’ name in the same breath? Doesn’t matter if the fireworks we buy for Diwali have the pictures of goddesses on them. Eh, that outrage won’t get us trending on Twitter.

And since it is the flavour of the season to get offended over inter-faith couples, why not get pissed off at Akshay Kumar’s Asif getting married to Kiara Advani’s Rashami? Yaar, they were living in Dubai, not India. Woh jo bhi kare, tumhe kya? Tu tera dekh! Platform nahi, aapka outrage hai OTT!

7. Ashram portrayed a Hindu godman as a rapist, corrupt man and a drug dealer. Sure, so those reports about real godmen being accused of similar crimes are OTT, aka over the top?

The day I decide to write this OTT controversies feature is the day Bobby Deol and Prakash Jha trend on Twitter with #BanAshram because their portrayal of an ungodly godman offended people! Coincidence? I think not! It’s a sign, from my God, who wants me to tell these people to open their damn eyes and read a newspaper for once. Have you forgotten about Asaram Bapu, Gurmeet Ram Rahim Singh, Swami Premananda, Nithyananda Paramahamsa and shall I go on?

Godmen are men after all and can have the same vices, indulge in the desires and commit the same crimes as we normal folk can. If you’ve found a godman or spiritual leader you believe is pure and untouched by the filth, great, good for you. But trashing a creative, fictional representation of a very real possibility is just misguided.

Now you’re wondering, if these controversies are so silly, why are we reliving them in a roundup? NGL, I just like to laugh over them. But come now, let’s be serious. We’re moving into a whole new year where people’s lives are going to be as messed up as they were this year when we were entering the pandemic phase. So instead of making life difficult for content creators and hardworking people by sabotaging them, we’ve got to make OTT a safe space for them to create. Can we all agree that our tolerance levels as a country have collectively gone to shit? And right now, when most of the world is progressing, we seem to be taking the road less travelled, aka regressing. And as Robert Frost says, that has made all the difference. Our content still lags behind because we as an audience cannot broaden our mindsets.

So take a long, hard look at these OTT controversies and, like, let’s try not to repeat ’em?

Hardika Pandya Says He Didn’t Know What Being Misogynistic Meant On Koffee With Karan. Okay, But You Know Disrespect?