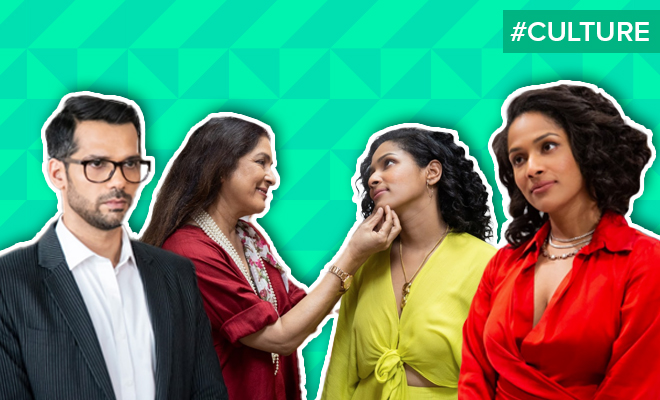 Masaba Masaba Review: Masaba and Neena Gupta’s Relationship Is The Showstopper Of This Fun, Fashionable Drama!

When is it ever not interesting to know about a celebrity’s life? In fact, their lives don’t even need that extra embellishment we’re used to in our TV serials and movies because, as the adage goes, their reality is stranger than fiction. When Netflix announced that it was giving us a semi-fictionalised peek into the life of designer Masaba Gupta in its new series, Masaba Masaba, we laid out the runway in anticipation. For starters, it was a new format, one whose success rate depended on how perfectly they could strike the balance between real and ‘creative liberty’. And then there was the presence of Neena Gupta, who has never missed a beat on screen. The trailer already proved that Masaba was comfortable in front of the camera. But could her glamorous world with a unique hot mess underneath hold our fascination? We’d know soon, as the series, directed by Sonam Nair and also starring Neil Bhoopalam, Satyadeep Mishra, Suchitra Pillai, Tanuj Virwani and Rytash Rathore premiers today on Netflix.

Masaba Masaba, where art thou Masaba?

I’d like to begin this with a teeny tiny disclaimer, that I only got to see two episodes of the show before I got down to writing. But hey, to someone who binges this genre like her life depends on it, I guess, I made up my mind with enough room for a second thought once I watch the entire series.

Masaba Masaba begins with a sight you’re not likely to see all that much—a distraught Masaba walking down a lonely Mumbai street, clad in red-hot designer wear but looking more dishevelled than ever. Why? She’s on the brink of her divorce (Mishra plays her husband), her creative juices aren’t flowing onto the board for her highly anticipated new collection from her House of Masaba, and there’s a constant media scrutiny of every little breath she takes. And yet, as she walks into the comforting arms of her mom, Neena Gupta, she’s that little girl again who already had so many eyes on her because she was different but didn’t care much. Her mom’s got her.

Now, the little details might be fictionalised but we know that the big picture is quite real. Most of these events, such as the separation, have happened in the designer’s life. And she does seem to share this beautiful bond with her mother, Neena, that the mother-daughter often talk about in the media as well. These two episodes kind of set the tone for what proportion of fact and fiction we could expect from the show, and I guess I am cool with that? For now.

Look here, playing a role that is a partly fictionalised version of yourself can be a tad confusing, but I think Masaba Gupta is easily herself on screen. She isn’t trying too hard, and that’s a good start. I’d like to think this is exactly how she is IRL, when in one scene, she’s all la-di-dah when talking to Kiara Advani’s Bollywood star, and the very next second, she’s screaming in total Mumbai girl-Hindi at her masterji to finish the dress she’s supposed to present to Kiara for her Swachh Bharat Abhiyaan appearance. It’s something most people who follow celebrity lives wonder—are these people like us or are their lives constantly so elite and posh? Well, this might give you an answer.

Also Read: Masaba Gupta Says Only A Certain Kind Of Face Sells In Bollywood. That’s The Unfortunate Truth, Even Today

Her chemistry with mom Neena Gupta, I already knew, was going to be my favourite part of the show. And what do ya know, it didn’t disappoint. I don’t know if it’s their IRL relationship, or Neenaji’s talent, that makes the whole thing look so normal and effortless, yet something you don’t mind seeing more of. And let me tell you, Neena Gupta imbues her usual charm in this performance too; when she’s nagging her daughter, getting excited about a meeting with Farah Khan (an amusing scene) or being crestfallen over a lost chance. I LOVE that they chose to feature the bit about Neena Gupta, an award-winning actress being so humble as to seek out more work. And I think some of that humility reflects in her daughter’s behaviour too.

Another relationship Masaba pulls off easy-breezy is with her on-screen BFF, played by Rytash Rathore. She’s in the midst of opening a bar, and Masaba often drops in on her for some heart-to-heart. Rytash is an interesting presence, one that grounds Masaba to the normal, just like her mom, and I think she has a pretty decent presence.

The clothes, you guys! Two episodes in, and I am loving the outfits, the House of Masaba store looks fabulous, and apart from the obvious outfits on Masaba, I am loving Neena Gupta’s style statements too. She is beautiful, that woman! And I kinda get Farah Khan’s jealously about it! The production design is classy and perfect for a show like this, and a special mention to that title credits sequence, which is so vibrant with its print patches and burst of pink and neon, an accurate ode to Masaba’s designs!

So you know how the glam worlds of fashion, Bollywood, and art are often depicted as shallow, superficial and, well, snobbish and insecure? I know that’s probably the reality of it, but I don’t know if I want to see yet another gay magazine editor who eviscerates and comforts in the same breath, a vapid artiste (Shibani Dandekar) whose art is just recycled trash, or a socialite-turned-life coach to the rich and famous who talks in riddles and is probably more insecure than her clients (Pooja Bedi). Masaba Masaba does have the usual layered references and name-throwing and air kisses bits, which, once again, I know are probably all true. But really, it feels like a stereotypical portrayal of a world that deserves a fresh take on.

I am not saying don’t be authentic or scandalous, but yaar, design it better, no?

I’m reserving my judgement on A LOT of things, because two episodes (minus direct interviews) are really not enough, guys. For example, I haven’t seen as much of Neil Bhoopalam as I’d like to, and his character, Dhairya Rana bossing Masaba around is something I am eager to see. There’s this scene he has with Neena Gupta that made me laugh, and I hope they both have more scenes together! There are more cameos that I didn’t catch, like Gajraj Rao and Mithila Palkar, so here’s hoping they surprise me, in a good way.

I am extremely curious to see how the show presents Masaba’s childhood  (the little girl playing Masaba is adorable) and the way her parentage, which caused much babble back then, and her relationship with her father, has shaped who she is. I also hope to see some more of her creative processes and struggles, and of course, a parallel of her mother’s professional struggle, despite being a National Award winner. More of Neena-Masaba banter, please!

I love chick-flicks, and Masaba Masaba reminds me a lot of YRF’s Mahi Way or director Sonam Nair’s previous venture, Gippi, both of which I enjoyed watching because they were unique struggles with relatable emotions. When the second episode ended, I found myself cursing, not because I wanted to watch more to review it, but because I just wanted to watch more.

I had an epiphany as I watched Masaba upload her filtered-unfiltered thoughts on her social media (a nicely-executed storytelling device). Even us, non-famous folk, now have so many appearances to keep up, that suddenly a celebrity’s struggle to showcases a picture perfect existence for the sake of the cameras feels so much more relatable.

Masaba is clearly a hot mess underneath all that designer-wear and her confident businesswoman exterior. She also has creative blocks, has a love-hate relationship with her mother (or should I see with living in her mother’s house), and despite being her own boss, is still taking orders from others. Not to mention, her love life is pretty messed up, but she deals with most of it in the same ways I would, makes the same mistakes, has the same regrets, and at the end of the day, needs her mom and BFF to give it to her straight.

On paper the design looks great, and the first trial has told me what areas are a comfort fit and which ones aren’t. Will I like the final outfit though? We’ll see! But I’m definitely taking it out for a spin. And so should you.

Also Read: Lucifer Season 5 Review: Despite Double Tom Ellis, Where In The Devil’s Name Is The Chemistry?