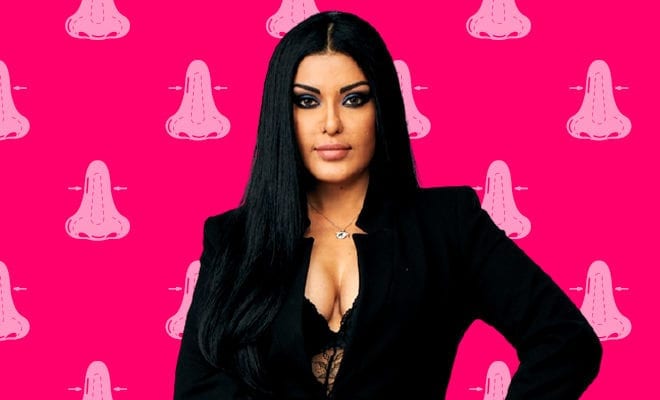 Koena Mitra Opens Up About Her Nose Surgery, Says It Wasn’t Botched. Her Body Didn’t React Well To It

Plastic surgeries are extremely common these days and more women are opting for corrective measures like botox and fillers. Although a bit risky because the results are permanent and irreversible, especially if anything goes wrong, it’s a personal choice to go under the knife. However, the women in the limelight do not have the luxury to keep their life and decisions like these private. Whenever a celebrity appears to have enhanced her facial features, she is accused by the media and trolled like she has committed a crime against nature. “She shouldn’t have messed with her natural beauty,” is how they gift wrap their urge to control a woman’s decision in concern. Koena Mitra too went through the same scrutiny and criticism after her nose surgery.

After several years, she is still targeted and trolled for getting a nose job which left her looking different. She has spoken about how it left her devastated–not the surgery, but the negative comments and unnecessary hate. In the recent interview she has clarified that it wasn’t the case of botched surgery as portrayed by the media at the time. She suffered swelling in her bone which made her face look that way.

She said, “Nothing went wrong. A lot of people go after things without investigation. I was also 12 years younger back then. So I did invest well in how my body will react to it. So, rhinoplasty is not a big thing. It is a common thing and you can go and check with doctors. They will tell your four percent professionals do it – from different jobs and professions. They don’t have to be actors only.” It wasn’t the surgery but how her body reacted to the alien components that were injected into her face which can happen to anyone.

Also Read: This Chinese Woman Went To The Hospital For A Nose Job But Realised Later A Part Of Her Ear Had Been Removed. Erm, What?

She admitted that she had sensitive skin and didn’t really know how her body would react to the surgery. She explained further how it was the post-trauma reaction to the procedure. “A body can react differently. I had bone swelling on my face. When you see a fractured leg, it takes 6 months just to fix the bone and then happens leg numbness and swelling. Recovery takes almost a year and half. So, my case was similar. My cheekbones were affected. In fact, my cheekbones were swollen. There was water collection on my face. Because of that everything looked awkward, everything looked weird.”

The surgery that affected her career a great deal and nearly ended it was just the result of a ruckus created by the media. She regrets ever coming out clean with the media who made a mountain out of a molehill. “They didn’t deserve my statement. They did not deserve so much boldness because they made a circus of it,” she said. It’s sad that women are still shamed for taking any decision about their body regardless of how it goes. Anushka Sharma was trolled and criticised for her lip augmentation even when was happy with how it turned out and had no bad repercussions. People make it their business to tell women what’s wrong and what’s not. So what is she got a lip job or if Koena Mitra’s nose job didn’t go as she would have wanted? It doesn’t affect your nose so why not keep it out of her (and everyone else’s) business.

Also Read: From Koena Mitra To The Women With The Biggest Cheeks, Why Does A Woman Going Under The Knife Concern Everyone?