Kate Winslet Reveals She Rejected Airbrushing A Bulgy Belly In ‘Mare Of Easttown’ Sex Scene. Yes To Real Women With Imperfections On Screen!

If you follow me on social media (allow me this little hubris, won’t ya?), you probably know all about my obsession with Mare Of Easttown. It’s a new  limited series from HBO that exactly a week ago, aired its finale on Disney+ Hotstar, and is possibly one of the best pieces of television right now. So good, in fact, that I bet Kate Winslet, who headlines the crime drama series as Marianne ‘Mare’ Sheehan, a detective sergeant in Easttown, Pennsylvania, gets an Emmy nod (at the least) for it. While lovers of crime dramas might be instantly tempted to watch it, let me make this clear: Mare Of Easttown is actually not so much about the murder case at the centre of it than it is about the woman solving that murder. And a major credit for why Mare’s character, already a brilliant written one, becomes even more endearing to the audience, is because of how Kate Winslet chose to play her.

What’s Mare Of Easttown about?

Mare was once a town hero, having led their high school basketball team to a landmark victory. 25 years later, she is a divorced mother of two, and grandmother of one. Her elder child, Kevin, fell into drug abuse, and died by suicide in her attic. The loss of a child drove a wedge between her husband Frank and her, and they divorced. Her daughter Siobhan doesn’t exactly have the best relationship with Mare. Kevin’s son, Drew, now lives with Mare, Siobhan, and Mare’s mother.

Mare hasn’t dealt with the grief of losing her son, and instead channelled all of it to solving the case of missing teen mother, who is also the daughter of her school friend and basketball teammate. After a year of failing to find the girl, Mare feels like she is unable to live up to the expectations that the town and her own family have from her. She’s failing as a cop, she has failed as a wife and a mother, and the years of wear, regrets and guilt are pretty etched on her face and body, as she tries to solve a new case—that of the murder of another teen mother—that has rocked Easttown. 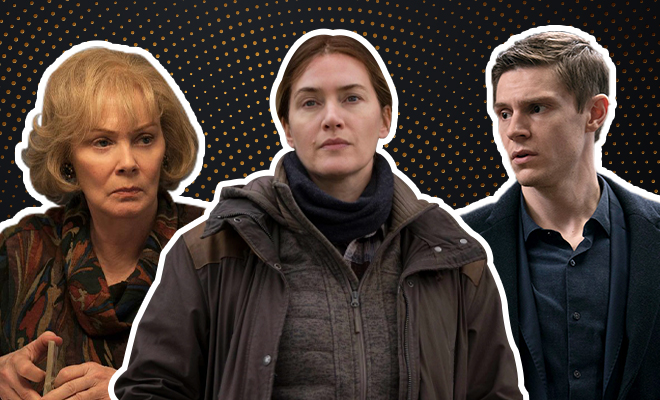 Now, I won’t go much into detail about the series, or why you should watch it, and it’s not from a want of conviction. I’ve already done that, and if I were to start again, we’d be here a while. Mare Of Easttown is a show that successfully detaches itself from the current trend of embellishing things for the shock value of it all, violence porn, or unnecessary red herrings. And despite all that, you’re still hooked, at the edge of your seat, and feverish with excitement when you along with Mare, unearth a new line of investigation. How does the show do that? By being authentic and oh so real in every aspect of its storytelling, even visual. Things don’t get long drawn because in reality, the most turning of events happen so suddenly that you barely have time to process. There are no red herrings. In reality, the truth is elusive, because people keep secrets to protect themselves and their loved ones. There are no heroes, only idealisations that everyone tries really hard to live up too. And grief is often the biggest secret of them all.

Also Read: 5 Reasons ‘Mare Of Easttown’, Starring Kate Winslet As A Detective Investigating A Murder, Ought To Be Your Next Watch

At this point, I don’t think anyone needs to see receipts of Kate Winslet’s brilliance as an actor. If you’ve followed her filmography, and more importantly, if you’ve seen her performances in The Reader, for which she won a Best Actress Oscar, you’ll know what I am talking about. Her Mare act reminded me a lot of The Reader.

But Mare is truly a one-a-kind character while simultaneously being relatable and someone you can instantly feel empathetic towards because of just how real she is. You feel her pain, her frustrations, her struggle to be someone that everyone wants her to be, and being a workaholic so she doesn’t have to deal with the problems in her personal life. We’ve all done that. As for her body language, that’s a whole different level of performance. Take her vape, for example, which on popular demand, is likely to win the Best Supporting Actor Emmy! And then, there’s the way Mare looks and dresses. In the words of Guy Pearce’s character, Mare is “a hot grandma”, who vapes, does Jameson shots, drops a lot of F bombs, and wears flannel. Mare wears her hair in a ponytail and only lets it down for social events. This is quite a welcome change to the usual female cops on American crime procedurals who choose to wear their hair down, which is barely ever practical!

I remember watching a recent Instagram Live that Kate Winslet did with an international women’s publication, where she apologised to the interviewer for having wet hair that didn’t look perfect coiffed, as you’d see on most celebrities even when doing virtual interviews. They both joked about how this was pretty much in character for Mare, who probably wouldn’t even know what an Instagram Live was! In another interview with The New York Times, titled ‘Mare Has No Filter’, Kate Winslet also revealed to Maureen Dawd certain choices she made for Mare’s character that in hindsight, have contributed greatly to the audience loving her character.

She revealed how there were many people wondering how she could’ve allowed herself to look so unglamorous onscreen, and recalled the time when director Craig Zobel assured her that he would edit “a bulgy bit of belly” in her sex scene with Guy Pearce and she told him, “Don’t you dare!”. And that was just one of the many decisions Winslet made to make her character look the tired, almost-on-breaking-point 46-year-old cop she is supposed to be. She ensured that they used lights to make her otherwise “luminous” skin look not so good. And on one occasion when the show’s promo poster was retouched, she sent it back to revert to the original.

“They were like ‘Kate, really, you can’t,’ and I’m like ‘Guys, I know how many lines I have by the side of my eye, please put them all back.’”

From adjusting her otherwise upright posture to a slouchy one, which looked like Mare was carrying a heavy weight on her shoulders at all times, to focusing her workouts on her thighs to make them look more muscular, filling our her eyebrows to making her face look heavyset, and retaining all the sunspots and lines, Mare’s relatability was in her imperfections and details, which Kate and the team ensured remained untouched.

Kate Winslet even talked about all the times that she doubted herself, and wondered aloud to people around her, like the assistant director and even her husband, if she was looking okay or if another actress could’ve done a better job. But at the same time, she stuck to this brief that she had given herself for her character, to maker he look as authentic as possible.

““Whenever we’d find something unflattering, we’d be jumping up and down like, ‘Yes! We’re wearing this.’”

You gotta give it to Kate Winslet and the Mare Of Easttown’s crew for their dedication to making Mare so much more than a one-dimensional female cop character that feels so real to so many people who watch it! We definitely need more such characters on screen!