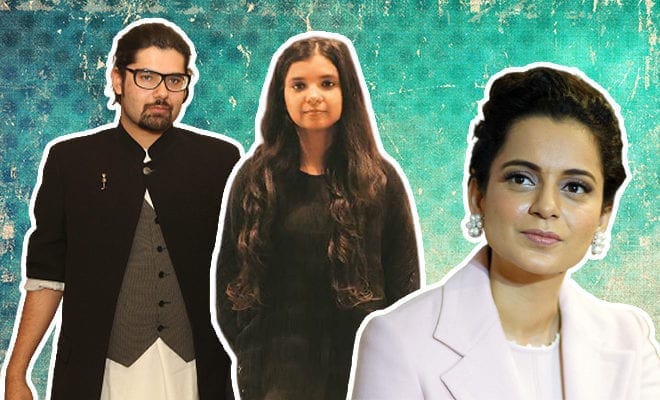 Amidst all the Covid news, my Instagram feed started flooding with memes about Kangana Ranaut’s account suspension (permanently so) by Twitter yesterday. Apparently, she had made a violence-provoking tweet where she called upon PM Narendra Modi to “tame” Mamta Banerjee, referring to the Gujarat Riots 2002. This was a highly inappropriate thing to say on a public platform and she really needs to chill in life. This was the last straw for Twitter which banned Kangana from making these abusive and hateful tweets by suspending her account permanently.

She called it the ‘death of democracy’ and accused Twitter of being racist. We don’t get it either. She also affirmed that she will use other platforms to raise her “voice” including cinema. However, it looks like Twitter is not the only one that’s done with her negative and demeaning claims and allegations about everyone and anyone. The fashion industry which works closely with the film industry is making its distance too with her on account of constant hate spewed by the actress.

Two of the leading Indian fashion designers Rimzim Dadu and Anand Bhushan who have worked with Ranaut in the past have decided to break all ties with her affirming their brands policy against hate speech. Rimzim Dadu announced the decision to end all future collaboration and remove images of past projects with her through an Instagram post. She wrote, “Never too late to do the right thing! We are removing all posts of past collaboration with Kangana Ranaut from our social channels and pledge to not engage in any future association with her.”

Do the right thing. pic.twitter.com/p72a7zqFz9

Also Read: Twitter Deleted Some Of Kangana Ranaut’s Tweets. But Looking At How She Insulted Rihanna, Is Deleting Enough?

Anand Bhushan also shared a post which read, “In view of certain events today, we have taken a decision to remove all collaboration images with Kangana Ranaut from our social media channels. We also pledge never to be associated with her in any capacity in the future. We as a brand do not support hate speech.” He captioned the post, “The right thing to do.” Both designers have cited their brand’s policy as the reason for not working with her.

Speaking about her decision, Rimzim Dadu said in an interview that her dissociation with Kangana Ranaut is solely about condemning violence in the country and anyone who insinuates it. While Bhushan said, while speaking to ET Times, “My brand and me don’t support any hate speech of any kind. Calling for Gujarat Riots of 2002 to happen again on Twitter by her was the lowest of the low. I do not wish to be associated with this viewpoint at all and totally condemn it.” And we totally agree.

Kangana’s costar from Tanu Weds Manu, Swara Bhaskar also lauded the designers for their decision. She wrote, “Pleasantly surprised to see this! Kudos to you @AnandBhushan & #RimzimDadu for calling out hate speech and incitement to genocide in a direct manner! Stand tall you guys!”

Pleasantly surprised to see this! Kudos to you @AnandBhushan & #RimzimDadu for calling out hate speech and incitement to genocide in a direct manner! Stand tall you guys! ♥️ pic.twitter.com/G1Gd82bbmL

Although Kangana hasn’t spoken about the ban by the designers, her sister did. After Bhushan’s post, Rangoli Chandel reacted to his decision and even said she’s suing him on account of the same. She wrote, “This person Anand Bhushan is trying to get mileage in Kangana’s name. We are not associated with him in anyway. We don’t even know him. Many influential handles tagging him and dragging Kangana’s name with his brand. Kangana charges crores for any brand endorsements but editorial shoots are not brand endorsements, neither we choose or select those clothes. Magazine editors pick those ensemble looks. This small time designer is using India’s top actress’ name to promote himself. I have decided to sue him. He will have to prove in the court how and where we had any endorsement with him now that he is claiming to disassociate himself. See you in the court.” I have only one question. When is her account being suspended?

Also Read: After Twitter Suspension, 5 Platforms Kangana Ranaut Could Pop Up On To “Raise Her Voice”