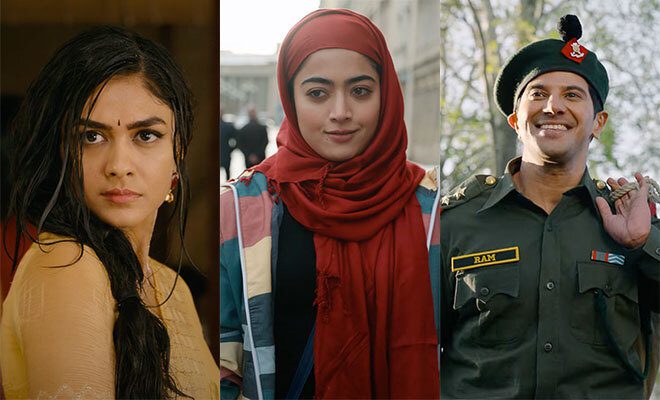 Okay, I will admit that I’m a hopeless romantic even though I don’t actually believe in love and happily ever afters. In my opinion, true love is a fictional concept that we only see in movies. Well, speaking of love and movies, the trailer of Sita Ramam starring Rashmika Mandanna, Mrunal Thakur, and Dulquer Salmaan is here and let me tell you, it’s an intense love story which is full of drama. We are glad that it’s not a love triangle!

On Monday, the makers dropped the official trailer of the highly-anticipated Telugu-language film Sita Ramam featuring Mrunal Thakur as Seetha Mahalakshmi, Dulquer Salmaan as Lieutenant Ram, and Rashmika Mandanna as Afreen. In the trailer, Rashmika Mandanna and Tharun Bhascker are on a mission to deliver Ram’s letter to his lady love Seetha after 20 years. However, they both realise that it’s impossible to find them. We actually thought that it is going to be a feel-good love story but turns out it’s an intense story about love and fate. Dulquer and Mrunal’s chemistry is amazing and we are loving Rashmika’s new avatar, to be honest!

Take a look at the official trailer here:

Also Read: ‘Darlings’ Trailer: Alia Bhatt Kidnaps Her Own Husband In This Dark Comedy And He Might Just Deserve It

Meanwhile, Sita Ramam is going to release in cinemas on August 5, 2022. Are you excited to watch this intense love story which is full of hurdles and drama?