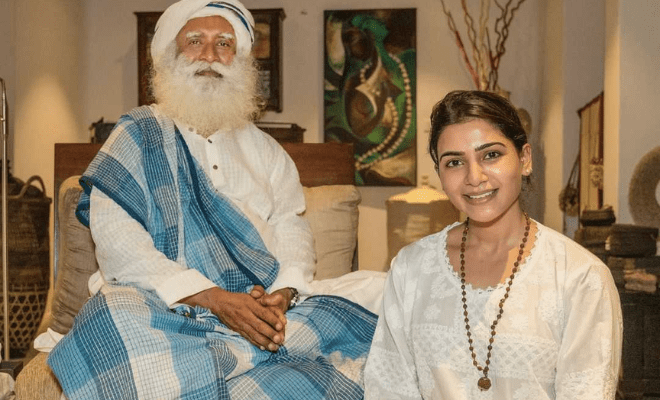 Samantha Ruth Prabhu Discusses Unfairness Of Life With Sadhguru. His Reply Is A Reality Check For All Of Us

Often times when we’re introspecting or are just looking at the way our lives are going, we often tend to ask ourselves why certain things are happening to us. There are some us who seek answers to this ‘why’ within us or leave it on God, and then that is some who seek answers from spiritual leaders of the world. In fact, recently the talented actor Samantha Ruth Prabhu met with Sadhguru and asked him about the injustices and unfairness of life. They also discussed several topics regarding the guru’s life and thoughts.

Recently, Samantha Ruth Prabhu at an event in Hyderabad met and interacted with Sadhguru wherein she spoke about the unfairness of life and whether that was the result of her karma. To which the spiritual leader replied that wanting the world to be fair to one’s self is a “schoolgirl question”.

Also Read: Sadhguru Said Rakshabandhan Is To Protect ‘The Feminine For Its Fragrance’. Everyone Smelt The Patriarchal BS Coming Off His Tweet

One of the questions that Samantha Ruth Prabhu asked was, “How much of one’s life is a result of their past karma? Are Are the injustices and unfairness that one faces in one’s life a result of their past karma, and if so, do you accept these injustices and find solace in the fact that the karma is being cleared, even though it might seem detrimental to our lives in so many ways…?”

As per reports, Sadhguru’s reply to Samantha Ruth Prabhu was a question wherein he asks her if she still expects the world to be fair. He added, “By now, you should know the world is not fair. It will not be fair.” He further elaborates how it will always remain unfair to her.

The actress, in 2021, had announced her separation from her husband and actor Naga Chaitanya. During that time she had said how the emotional investment of people into her personal crisis had completely overwhelmed her and even expressed her gratitude for being empathetic and concerned for her. She even thanked her fans for defending her against the rumours that were doing the rounds at the time.