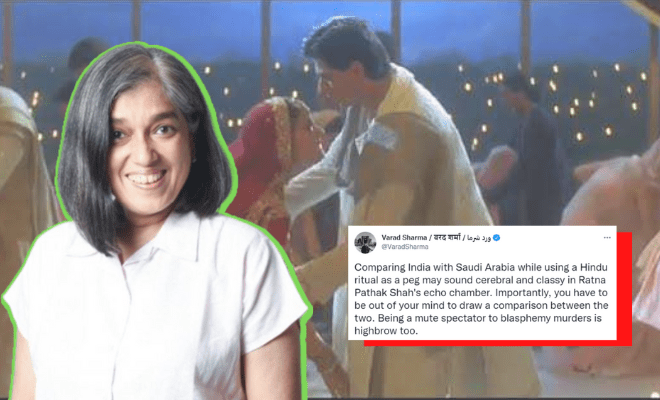 If there is an actor that is the epitome of boldness and outspokenness, then it has to be Ratna Pathak Shah. She has always spoken her mind and expressed her thoughts on various issues. In fact, I personally love her different and open-minded perspectives on many of the social issues and practices that we have in India. Just take the recent example of the time when she openly stated that India was turning into an extremely conservative society and soon would turn into Saudi Arabia as it is ‘very very convenient’. Ratna Pathak Shah also called out the age-old tradition of observing fast on Karwa Chauth and said she was appalled by the modern educated women who follow such practices. Needless to say, many of the people online took offence to that and took to Twitter to express it.

In a recent conversation, Ratna Pathak Shah spoke about how nothing seems to have changed for women in India as they continue to practice age-old traditions like observing fast on Karwa Chauth. The actor was appalled by the modern educated women who are still thinking of widowhood as a horrible situation for women and doing such fasts for the long lives of their husbands.

Also Read: Raj Kundra Shares A Witty Meme On Karwa Chauth. Urges Men To Follow His Suit And Keep A Fast For Their Wives.

Ratna Pathak Shah said, “Nothing has changed for women, or very little has changed in very crucial areas… We’re becoming superstitious, we’re being forced into accepting and making religion a very important part of one’s life. Someone asked me for the first time last year if I’m keeping ‘karwa chauth ka vrat’. I said, ‘Am I mad?’… Isn’t it appalling that modern educated women do karwa chauth, praying for the lives of husbands so that they can have some validity in life? A widow in the Indian context is a horrible situation, isn’t it? So anything that keeps me away from widowhood. Really? In the 21st century, we are talking like this? Educated women are doing this.”

Needless to say, comments made by the prolific actor did not sit well with a certain section of Twitter and they took it upon themselves to call out Ratna Pathak Shah in their tweets. Check it out:

Ratna Pathak Shah uttering garbage against Hindu rituals but she can't speak against the same in Islam like triple talaq, halala and women forced to live like a slave.
Does she have courage

Will Ratna Pathak Shah also enlighten us with her views on many Muslim males who insist on their women, even infants, wearing a hijab/ burqa in India and assault them if they don’t? Is that not Saudi Arabian for her? Or is that her idea of just being liberal?

Woke Libbies while giving Gyaan to Modern Women on

But the hypocrite was completely silent on * Hij@@b issue"

What else can we expect from a typical elite Bollywood Secularist

Will Ratna Pathak Shah also enlighten us with her views on many Muslim males who insist on their women, even infants, wearing a hijab/ burqa in India and assault them if they don’t? Is that not Saudi Arabian for her? Or is that her idea of just being liberal?

Comparing India with Saudi Arabia while using a Hindu ritual as a peg may sound cerebral and classy in Ratna Pathak Shah's echo chamber. Importantly, you have to be out of your mind to draw a comparison between the two. Being a mute spectator to blasphemy murders is highbrow too.

Having read both sides of this argument, I have to say I side with the actor. No matter how much of a ‘choice’ we think is involved in practices like observing Karwa Chauth or wearing a mangalsutra, the fact remains that these practices are deeply rooted in patriarchy. And that cannot be ignored as per convenience. In fact, I’d even say that we’re institutionalised into thinking that there is a choice of sorts. Now, I’m not pulling other women down here, I’m just saying that we really cannot change the origin stories of these practices to turn them into feminist choices. Study Reveals Women Are More Prone To Depression Than Men. Not Surprising At All!