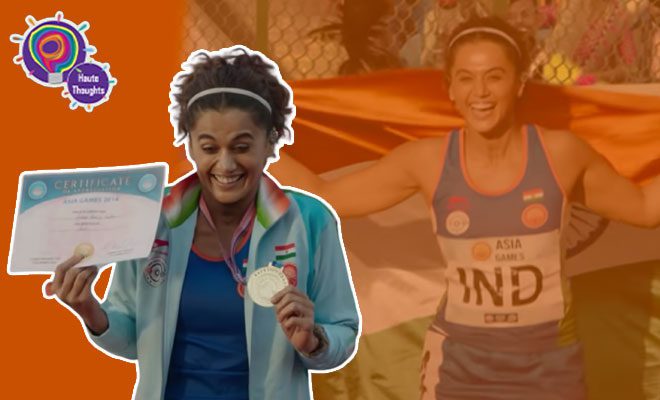 5 Thoughts We Had About ‘Rashmi Rocket’ Trailer: Taapsee’s Sports Drama Goes Up Against Gender Tests For Female Athletes

Taapsee Pannu has been hard at work, doing films and roles that though tackle mainstream themes, deal with these themes in unconventional ways. The Haseen Dillruba actor is all set to play a sportsperson in not just one but two films. In Shabaash Mithu, she essays the role of Indian Women’s Cricket Team Captain, Mithali Raj. And in Rashmi Rocket, she plays an athlete from Kutchh, Gujarat, who shows tremendous promise until something major obstructs her path to glory. The trailer for Rashmi Rocket was released on Thursday evening. Directed by actor-writer-filmmaker Akarsh Khurana (Yeh Meri Family, Karwaan, Mismatched), Rashmi Rocket stars Taapsee Pannu, Priyanshu Painyuli, Abhishek Banerjee and Supriya Pathak.

Get ready to run with Rashmi in this race on and off the track. She will need you in this one 🏃🏾‍♀️🚀#RashmiRocket ready to take off on 15th October 2021 only on @zee5 pic.twitter.com/spUVDap0SH

According to the Rashmi Rocket trailer, Rashmi is a girl who never thought she’d be a sprinter, but turns out to be quite the athlete, almost at the brink of playing at the national level. She is supported by her family, which includes her mother, a woman who is clearly a leader, as she leads by example and teaches her daughter to be strong and fearlessly go for her dreams. There’s also an army officer, played by Priyanshu Painyuli, who Rashmi dates and eventually marries. However, when Rashmi undergoes a gender test that is mandated for female athletes and fails to fall under its prescribed conventional gender norms, her career is badly derailed. How she rises again, with the help of a determined lawyer who wants to fight against the system to overhaul the test rule, seems to be the rest of the story.

Here are 5 thoughts we had about the Rashmi Rocket trailer:

1. Taapsee Pannu looks incredibly fit and that toned, muscled physique is making us go wow! The actor has been posting snippets of her training and her physique on her social media. Recently, she even clapped back at a troll who called her body ‘mardana’ as in ‘masculine’. Though now I am not sure if it was an organic interaction or a promotion antic for the film’s theme just fit perfectly with Taapsee’ Twitter persona.

2. We like that this isn’t your typical sports drama about the underdog winning against all odds. Not that there’s any harm in  those stories. We all love sports dramas and the euphoria that comes with the climax. But Rashmi Rocket looks like it might have something more to offer.

3. Gender testing or sex verification in sports has been known to not just derail the careers of many female athletes but also leave them with psychological harm, causing gender identity crisis, depression and so on. We’re glad that a mainstream Bollywood movie is tackling this subject and we look forward to seeing how it handles it.

4. Will we get some more memorable female ally characters with Rashmi Rocket? We hope so. At least, Abhishek Banerjee as Rashmi’s lawyer looks poised to be that character. We’ve usually seen Banerjee in comedic or negative roles, so this one is going to be quite something! Also, can I just say that Priyanshu Painyuli looks rather handsome as an army man here! We already know he is a great actor, and we look forward to seeing his chemistry with Taapsee Pannu in the movie.

5. Rashmi Rocket isn’t waiting around for theatres to open everywhere. It is going for an OTT release, and will premiere on Zee5 on October 15, that is Dussera.

Taapsee Pannu Says She Won’t Do Sex Comedies Because They Are Degrading To Women And We So Agree!