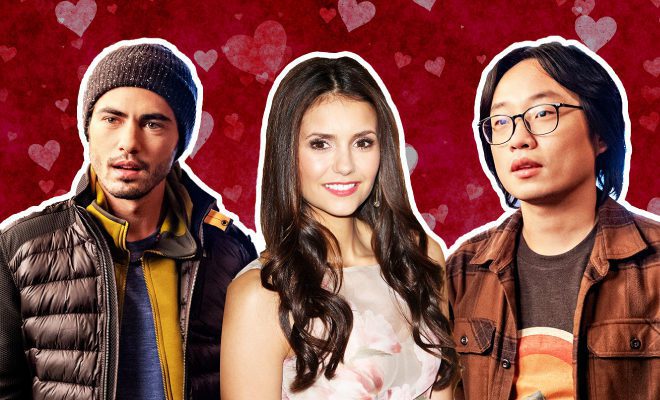 Alright, full disclosure, I am a sucker for holiday movies. They are formulaic, saccharine, and possibly the most unreal series of fortunate events that can happen to you. But they are romantic, and comforting, and come with happy endings that real life knows not. I gobble them up like comfort food. And when Netflix dropped the trailer of Love Hard, a holiday rom-com starring actors from some of my favourite TV and film franchises, I wanted to have it injected into my veins right away. The film is directed by Hernán Jiménez, written by Danny Mackey and Rebecca Ewing and stars, wait for it, Nina Dobrev aka Elena Gilbert from The Vampire Diaries, Jimmy O. Yang aka Jian-Yang from Silicon Valley and Bernard Tai from Crazy Rich Asians, and Darren Barnet aka Paxton Hall-Yoshida from Never Have I Ever! Zamn, amirite?

Love Hard is about a girl (Nina Dobrev) who lives in Los Angeles and has rather sucky luck in love. She meets a rugged hunk (Darren Barnet) on a dating app, and instantly falls for him. For the holidays, she decides to travel all the way to the East Coast, to the guy’s hometown to surprise him, only to find out that she has been catfished by his childhood friend (Jimmy O. Yang).

Here are five thoughts I had about the Love Hard trailer:

1. I love that a post-TVD Nina Dobrev is picking up absolutely fun, lighter stuff like Love Hard

Nina as Elena Gilbert on The Vampire Diaries lost so much, cried so much, and had never-ending boy trouble. So it is kinda great that she is picking up these fun projects that have her doing normal-ish things. I don’t know if it’s just me, but she looks so different too! More mature, perhaps?

I’d love to see her in a stylish, sassy series where she could channel some of that Katherine Pearce ruthlessness and depth in a lead role. But I am excited to see her in a rom-com! After all, her on-screen BFF Bonnie Bennett aka Kat Graham also did a holiday movie (The Holiday Calendar) sometime back! Although, much like Elena, Ninas’s character in Love Hard must have boy trouble too!

2. Darren Barnet is such a snack, and totally channeling Paxton Hall-Yoshida here, methinks!

Okay, so while I am done with the trope of the girl falling for hot guy and then realising that she actually loves the nerd, who for someone reason cannot look hotter than the hot guy, unless he gets a makeover… I am still thankful for more sightings of Darren Barnet. Gosh, that man is a snack! From the trailer, it looks like he plays an adventure junkie that Nina’s character calls ‘Tom Cruise’! His character, Paxton Hall-Yoshida, on NHIE might be getting layers, but I don’t have bloated expectations for this one. But I would love to be surprised!

3. Erm, I pretty much know the rest of the plot, which seems tad cliché to me.

Yaar! I hate when the trailers reveal everything there is to know about the movie. I mean, I get it this isn’t a thriller that I want them to hide certain elements of the story. But maybe it is me, the eternal optimist, still holding on to hope that I get something that was unexpected by the time the credits roll.

4. While this is a fun movie, I am worried it makes light of ‘catfishing’, which is not fun at all.

Okay, as someone who has experienced most of the cons of online dating in this age, I haven’t yet been catfished. But it is definitely something super scary and can have quite the impact on the person’s mental health. I do have misgivings about the fact that the film might make light of something that serious. I hope there’s at least a subtle disclaimer that indicates that catfishing is not okay in any circumstances.

5. Nevertheless, I am going to watch this one anyway, because the biggest attraction is this cast!

It’s literally a cast full of actors from some of my favourite franchises! Apart from Dobrev, Barnet and Yang, there is also Harry Shum Jr. and James Saito, along with a bunch of other familiar faces. Excited!

Love Hard will release on Netflix on November 5, 2021.