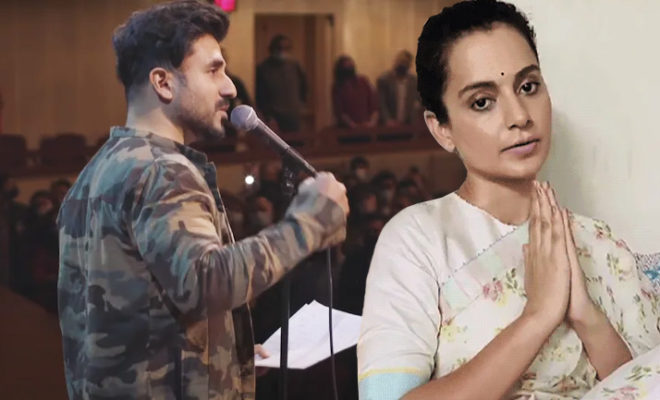 I don’t like a lot of celebrities, actors, or people in general. But then there are some that I like and not because of their looks or anything else, but rather because of the way their mind works, because of the work they do, because of how intellectually smart they are, and how much they care about things that actually matter. For me, one such famous celebrity is a stand-up comedian known by the name of Vir Das. The way he talks about his concerns regarding our country, his perspective on things, and of course, his sense of humour is what makes him stand out. I have loved his Ten On Ten series and now his new video, I Come From Two Indias is my new favourite. But it hasn’t been that way for many, including Bollywood actor Kangana Ranaut.

Known for her differential opinions, actor Kangana Ranaut is back again with yet another criticism of someone( or someone’s work), and this time that someone is none other than the stand-up comedian Vir Das. She has asked for strict action to be taken against him for his new video, I Come From Two Indias.

The six-minute-long video by the comedian talks about the duality of Indian and emphasizes topical issues that the country is facing. In the video, Vir Das speaks about how he comes from an Indian where people worship women during the day and gangrape them at night – this statemen was what most netizens took objection to. Needless to say, his video did not sit well with Kangana Ranaut, to say the least.

Also Read: Kangana Ranaut Called Vikrant Massey A Cockroach After He Teased Yami Gautam. Are We Back In School?

To express her disapproval of the video, Kangana Ranaut took to her Instagram story, where she wrote, “When you generalise all Indian men as gang-rapists it gives rise and encouragement to racism and bullying against Indians all over the world…after Bengal Famine Churchill famously said, ‘These Indians breed like rabbits they are bound to die like this…’ he blamed Indians’ sex drive/fertility for the death of millions because of hunger… Such creative work targeting an entire race is soft terrorism… strict actions must be taken against such criminals @virdas.”

In fact, as per reports, Vir Das offered clarification on Twitter regarding the video he posted. His tweet is aimed at people like Kangana Ranaut who misjudged the point of his video and are angry about it.

Honestly, I have to say that I disagree with Kangana Ranaut and her slamming of Vir Das and his video. As a person of this country, he has the freedom of expression and speech. Moreover, I believe that there is a lot to think about what he said rather than slamming him for it. After all, let’s agree that there was some kind of truth in what he said.