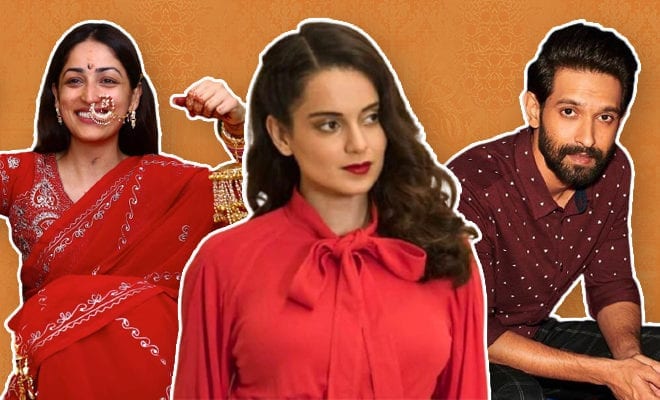 Kangana Ranaut Called Vikrant Massey A Cockroach After He Teased Yami Gautam. Are We Back In School?

Yami Gautam had a very intimate wedding and we she dropped her pictures on social media, it took all of us by surprise. While there have been several rumours about so many celebrities getting married, there was no hint of Yami Gautam’s wedding. I remember when someone shared it on Hauterfly’s group, I was so surprised. Not like she’d invite me or call me up and inform me in advance but oh boy, how well she managed to keep the wedding private! And Kangana Ranaut loved her wedding pictures like everyone else.

I mean, Yami looked so radiant and simple in her pictures from the functions. She was a sight to behold and while most celebrities go super stylish, this pahaadi bride stuck to her traditional roots. Yami uploaded pictures from her haldi ceremony, a family picture from the wedding and also one in her all-red saree with kaleerein hanging from her bangles.

Vikrant Massey jokingly compared her with Radhe maa. He wrote, “Pure & Pious like Radhee Maa.” I mean, yes people joke around with their friends, and all that. It’s all meant to be taken in good humour. However, I do understand that people can take feel offended by it because that’s how traditional pahadi brides look and in a way, their comments made fun of that. You know, like if someone had said something about Priyanka Chopra’s desi heritage, Indians would be so offended and call it racism. Everyone’s a little sensitive but I am sure both Massey and Khurrana meant well and all they were doing was teasing their friend, like most of us do. I agree, they could have been more sensitive about the comments they make on pahadi culture.

However, Kangana sharing the pahadi heritage with Yami, got very offended and called Vikrant Massey, well, a cockroach. She wrote, “Kahan se nikla yeh cockroach…lao meri chappal.” This is really hilarious! Who fights like that? I mean, yes, several people got offended by his comment and wrote all sorts of nasty things but you’d expect a person who claims to be intelligent to give him the benefit of doubt. That’s probably the kind of relationship they share – they pull each other’s leg, troll each other, all in good spirit.

Then Ayushmann Khuranna became an unsuspecting victim to Kangana’s rant, however, no one ever understood what motivated her to drop that comment. He was casually going about his day, and he decided to drop a complimented on his co-star and friend, Yami Gautam’s picture. He wrote, “Simple. Real. God bless.” But somehow that too motivated Kangana to school him. She gave an unsolicited Ted talk on how real isn’t necessarily simple, how that is actually layered and spoke about having the perception to view the complexity in subtlety.

We are no judge here, but really, calling someone a cockroach because you don’t like their words is just hilarious. Kangana Ranaut, is carrying her legacy forward on Instagram now!

ALSO READ: Donal Bisht Claps Back At Trolls For Shaming Her For Bikini Pictures. Her Choice Of Clothes Is No One’s Business!