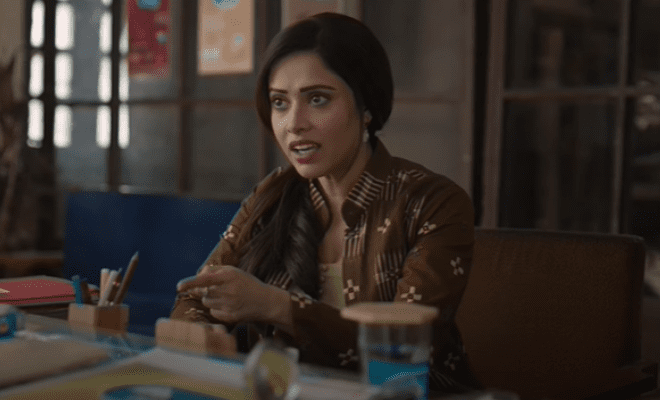 Nushrrutt Bharuccha has carved a niche for herself in the industry with her eccentric film choices and the out of the box characters she plays on the silver screen. She was last seen in the 2021 horror film Chhorii that not only had some really scary elements but also gave a strong message to the audience. Now, Nushrratt is back with yet another film with a social message called Janhit Mein Jaari. The cast of this film includes Vijay Raaz, Tinnu Anand, Pavail Gulati, Annu Kapoor, Anud Dhaka and Paritosh Tripathi and Brijendra Kala. It is directed by Jai Basantu Singh and produced by Raaj Shaandilyaa. The film is slated to release on June 10, 2022. The trailer of the film was released on May 6, 2022.

The trailer of the film starts with Nusshrratt’s character Manu getting a job as a condom salesgirl. She tries new means to get to increase the sales of condoms. But being a womaniya, she is judged by the mards and looked down upon when they come to know what is that she is selling. Funnily enough, as the street name of condoms is ‘choti chhatri‘, the condom brand Nushrratt sells is also the same. In the trailer, she is also heard telling the manager that they should rename the brand with what they are actually selling.

Nushrrutt aka Manu falls in love with a guy who introduces her to his family but when asked what she does for a living, he replies by saying that she works for a company called ‘little umbrella’. Towards the end of the trailer, Manu is seen talking to people about how essential condoms are for women. she emphasises how women have to undergo illegal abortions which pose dangerous risks to their health.

Also read: Exclusive: Nushrratt Bharuccha On Playing A Pregnant Woman In ‘Chhorii’, Her Own Fears, And Hopes For 2022

All in all, the film looks solid with a great message with a female actor in lead. We are so excited about this film!