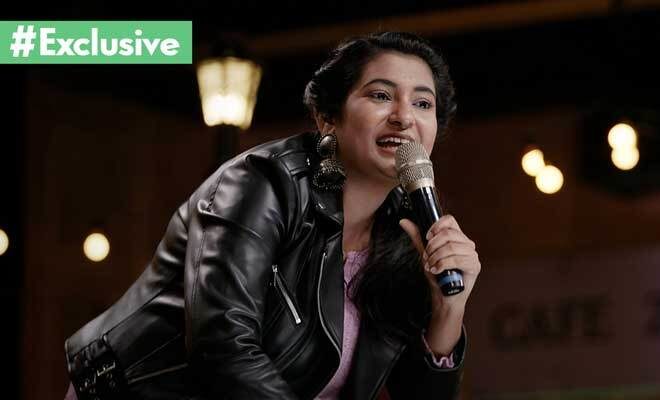 Exclusive: Sumaira Shaikh On Her First Comedy Special ‘Dongri Danger,’ Women In Comedy, And Being Directed By Friend Sumukhi Suresh

I believe stand comedy in recent years has taken the centre stage, courtesy of great writing and some amazing stand-up comedians. Adding some spark to our dull days, and offering society a mirror, stand comedians today are stating facts hidden deeply in layers of happy laughter. And as we dive into the depths of the Indian stand-up comedy space, we have with us Sumaira Shaikh navigating us through it all. Accompanying her in the conversation is her all-new Amazon prime standup special (also, her debut) Dongri Danger, (for which we’re quite excited about), Sumaira takes me behind the journey of her jokes, her favourite Indian comedians and of course, some tea about the popular show Pushpavalli.

Q: Tell us about your new standup special Dongri Danger. How did that come about?

Sumaira Shaikh: It’s my first stand up special and it’s all about the jokes that I’ve written from 2016 when I started comedy full time. In 2017 there was this one event, which was life-changing, which is my brother passed away. So after that, my comedic style had to change, it has a bit of personal stories, also the perspective of growing up in Dongri, my father’s perspective of growing up in Dongri and how different it is from mine. So that is a part of the show and a lot of observational bits about how Tsunami water going back is actually a relaxation video. So things like that, just observation comedy, that’s also a part of the whole one hour.

Q: You also mentioned that the special somewhere helped you channel your grief. What was the process like? Was it liberating or difficult?

Sumaira Shaikh: It was, because of everything I do, every experience that I have, because as a funny person, it’s important for you to use humour to deal with it. So grief is something, yes, I dealt with humour, but off stage, not on stage because, on stage, there is too much reality, right? You’re putting out something, which I don’t know if the audiences will accept or not, and you don’t want something as personal as that to be rejected by the audience. So I think, it was finally in 2021 when I was ready to talk about it on stage. So I have spoken about it now in the special and I really hope people like it and hope they appreciate it.

Q: Do you enjoy curating a stand up special or writing for a show?

Sumaira Shaikh: Stand up yes. I love it. It’s like I’m the most free, it is a very liberating experience to be on stage with stand up. But I also like writing fiction a lot because I think I started writing just like that and then I found out that it, this is also like the whole process is longer and it pays off much later, but it also gives so much. I think, writing has given me a lot in life, so I’m very thankful for writing also. So yeah, I like both actually. I can’t really pick one.

Q: You also mentioned how writing Pushpavalli Season 1 was important for you at a time when you wanted to quit comedy. How did that show change things for you both professionally and personally?

Sumaira Shaikh: Yes, I wanted to quit comedy in 2017, that was exactly right after my brother’s death. I was like, I’m done. I didn’t want to do stand-up and do jokes. But thankfully I had fiction and Pushpavalli and Sumukhi the creator of Pushpavalli for sort of pushing me and telling me. She also said that “things immediately won’t be funny again for you, why don’t you just do fiction? Why don’t you just concentrate on this, and show up every day for work? We’ll be there for you and we’ll help you that’ll also keep you connected to your profession?” That’s why I think the show literally saved me personally and professionally also because it gave me to do something and I gave up stand-up for some time at that time. Cause it was too much to go up on stage and you know because I wasn’t able to be like funny or get the joke funny. So I really channelled whatever grief I was feeling in the writing of Pushpavalli. So I’m very thankful and grateful to the show.

Q: You have collaborated with Sumukhi Suresh previously for Puspavalli and now she’s directed your first special. What is that one takeaway you’ve had from these collaborations with her?

Sumaira Shaikh: Sumukhi is someone I consider as my mentor in the profession, because I feel like I had very different ideas of how things work and I would say “no I’m unlucky and things just won’t come to me.” I think she really beat that out of me, but she was like, “I’m talking about hard work and it’s all about perseverance and you can’t really beat yourself up for your luck or anything.” So, that’s one thing. I think every project I have worked on with her, the one thing that she taught me is that no project is small or big. You have to give it your all whatever you’re working on. And then you talk about the results of it. So I think that I need to be grateful for everything that I have, and it is something I learned from her, like every project. And for that, she’s taught me that and I’m like now very grateful that finally, my standup is going to be on Amazon Prime which is amazing.

Q: Stand up comedians today show society the mirror and continue to talk about the reality marinated with humour. What scares you the most about your job?

Q: Also with controversies attached to your fellow comics, does it impact you or the kind of work you wish to put out but aren’t able to? How do you filter your content?

Sumaira Shaikh: I think personally, for me to put anything out anything there, I feel it’s very important to have two checks. One is that I will keep my intent very clear which is, that my intention was not to offend anybody, but this joke was purely meant for entertainment. Like I laughed at something silly and I just wanted to put that out there for people to laugh at–that’s one.

And second– I feel like if we’re dealing with things which are sensitive in nature or some topics, as a comic personally, this is what I applied to myself then I have to be smart about that. So, then the craft of it needs to be layered and it can’t be very on the face. I think it only applies to me not anybody else, but that is what I tend to do as a writer of the joke is that then you try to hide things.

Q: Tell us your favourite stand up comedian. Someone who you really look up to.

Sumaira Shaikh: I have always looked up to a few comics from the Indian comedy scene, Sumukhi toh yes, of course. I have spoken so much about her. Anirban Dasgupta as well, because  I just am very drawn to his comedy and how subtle and how calm he is on stage. And I do really enjoy watching him perform, and Biswa Kalyan Rath, because he’s very honest, I feel on stage, so I really like him as well. So these are the comics I really enjoy.

Q: What is a day in a life of a stand-up comedian like?

Sumaira Shaikh: If you only do stand up, that’s the only profession, then you wake up late. You think about things, then you have a show in the evening and then you come back and then, you know, but, I am also a writer, so unfortunately that is not how my life is. My day begins early at ten a.m. I come to the office, we write shows and now I am writing a movie and you’re co-creating a show. So we do all of that. Then that evening we have shows and then we go back home. Then the day begins again.

Q: What is the one thing you would like to change in the Indian comedy space as it stands today?

Sumaira Shaikh: One thing I would want to change for sure is the importance that is given to how many numbers you get on your YouTube video. Like a YouTube clip should atleast get one million or else it isn’t profitable. I think you’re putting on a body of work. You need to be consistent with putting out more videos. You need to have perseverance and that’s all that matters. After 10 years no one will care how many views your video received. It only matters that you have lasted for 10 years in this scene and in the industry. So that’s one thing. I think people should stop caring about views and numbers like it’s just about putting out things that’s all.

Q: Alia Bhatt recently mentioned that we need to stop tagging a female-led film as a ‘woman-centric film.’ There have been many times in the recent past that the success of female comics has been brought down to the gender. Do you see that changing now?

Sumaira Shaikh: That will always happen no matter how far or advanced it goes. Our industry is relevantly new, but Bollywood has been there for many many years and it’s established but women in that industry are still tackling it. I think that is something I feel for all the females out there that you need to get ‘besharam’ and be like, ‘I work whatever I get for whatever reasons, but I’m here to stay and I’m here to work’ and you will have to hear my voice. And yes there are going to be trolls and people who will be like you got that because you’re a woman but you have to say to yourself that ‘I am going to work hard and I’m here to stay.’ So yeah, you should absolutely own everything you get.

Zareen Khan Is Kween Of Ethnic Wear
By Ritu Sanghvi
On Sep 12, 2022

Yuvika Chaudhary And Prince Narula’s Jodi Is All Hearts!
By Pragya Dubey
On Sep 16, 2022

Young Actresses Who Are Taking Over The Film Industry:
By Mehak Walia
On Aug 12, 2022

Kaneez Surka: “When People Say Indians Aren’t Funny, I’m Like Are You FREAKIN’ Kidding Me?!”