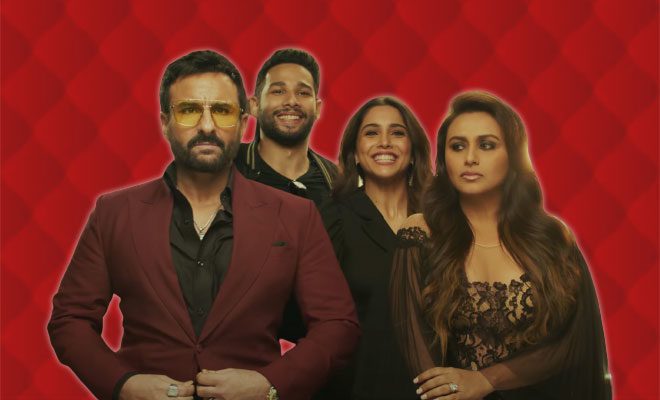 While I am all for change and the evolution that comes with change, I do kinda miss the YRF movies of old. You know, the Band Baaja Baarat and Bunty Aur Babli movies that were all about entertainment, entertainment, and entertainment? Which is why, even though reboots and sequels don’t always pan out as good as the original, I am low-key excited for Bunty Aur Babli 2. For starters, I want to see Rani Mukerji do something fun on screen, like the OG Babli did, because she was such a character na! And while I am going to miss AB Junior and their chemistry, I know that she has an equally fabulous one with Saif Ali Khan, who is now going to play Bunty in his own unique style. Add to that Siddhant Chaturvedi and Sharvari, both promising young actors, and this might just be a fun outing! At least that’s what it looks like from the teaser that just dropped.

YRF has released the teaser for Bunty Aur Babli 2, and if I were to sum it up for you, it’s pretty much like the new generation is saying “Ok, boomer!” to the older one. And that might be a fun clash to witness. The teaser begins with Rani and Saif reminiscing about the fact that they’re working together after 12 years, and getting ready to do their thing for director Varun V. Sharma, when newbies Siddhant and Sharvari join in. The confused OG B&B are told that producer Aditya Chopra aka “Adi Sir” has changed the script, which makes them both walk away in a huff. But the young ones are cool with it, as they’re ready to pose a worthy challenge as they take on the mantle of Bunty Aur Babli 2.0.

Also Read: Shanaya Kapoor Talks About Dealing With Judgements That Come With The ‘Star Kid’ Tag

Their banter is fun, and I would like to think that if there’s more of this in the script, and if the story of this sequel is about Bunty Aur Babli being confronted by some new-age copycats with whom they eventually clash, this might just be an entertaining one. Guess we’ll know more only once the trailer is out on October 25, 2021!