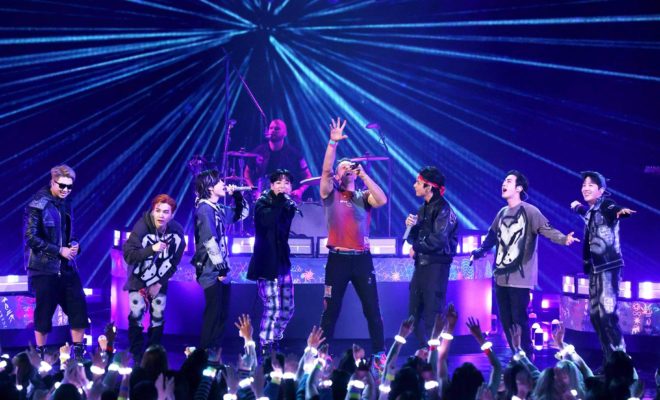 Yesterday was the best day for the fans of Coldplay and BTS, as the two bands teamed up to perform their Hot 100 No. 1 single, My Universe at American Music Awards 2021. This was the first time Coldplay and BTS had performed the song together live and in person and clearly it was worth the wait. The performance was so much fun that we couldn’t stop ourselves from grooving!

The performance was introduced with enthusiasm by host Cardi B, who told the crowd: “America, please! I know the crowd is about to get crazy. Hold on, hold, This next performance is about to be huge! They have the biggest fans in the world. Performing together for the first time, give it up for Coldplay and BTS.”

Usually, BTS performs with an amazing choreographed dance routine on stage but this time they just grooved along to the song with Coldplay’s Chris Martin. And BTS’ moves were as smooth as butter, so there’s nothing to complain about.

They also interacted with their fans in the crowd, who cheered enthusiastically as always. In the end, both BTS and Coldplay engaged in a dance party of sorts as controlled fireworks blasted off behind them on stage. “Coldplay BTS, thank you!” the group said as they blew kisses to the camera. Tell me I’m not the only one who tried to catch it or are you guys normal?

Also Read: Jung Ho-yeon Of Squid Game Is All Set To Join BTS As International Ambassador Of Louis Vuitton

BTS was scheduled to perform their hit song ‘Butter with Megan Thee Stallion on Sunday, but due to an unexpected personal matter she couldn’t join them, she informed on Twitter. My Universe topped the Billboard Hot 100 upon its release in October. Sunday marks the first time both groups have played the song live together, as Coldplay has previously performed it with a video of BTS in the background.

South Korean boyband and worldwide sensation BTS took home three awards at the AMAs, including the Artist of the Year, along with awards for favourite pop duo or group and favourite pop song for their hit single “Butter.”