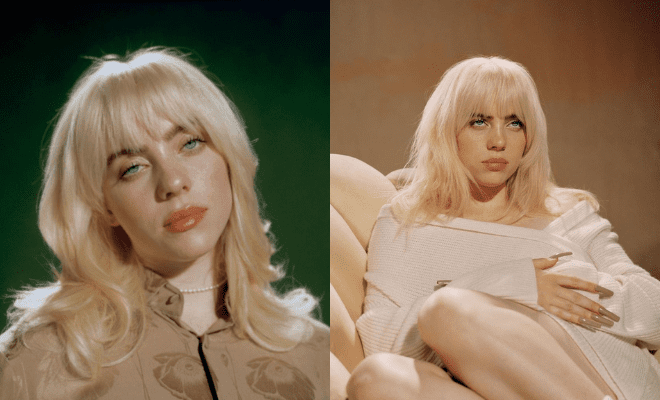 Billie Eilish has to be one of my favourites of all the celebrities we currently have in the mainstream media. Other than her soulful and very relatable music, I have always enjoyed her authenticity which can be seen in her interviews. She has always been vocal about her experiences with poor mental health, body shaming, body image issues and other things that many people around the age have also faced and continue to struggle with. Recently Billie opened up about her relationship with her body, her mental health struggles and more.

Billie Eilish has been open about her mental health, including how she slept in the same bed as her parents and brother until she was 11 years old due to separation anxiety. During a recent interview, the 20-year-old singer opened up about her childhood problems, admitting that she couldn’t be apart from her parents, Maggie Biard and Patrick O’Connell when she was younger. She explained that she was concerned about what would happen to them in her absence, about what would happen to her, and about being forgotten.

Billie also revealed that when she did sleep alone, she would call her parents because she didn’t like the dark and was afraid of “scorpions” on her bedroom floor. She said that she couldn’t sleep on her own. She added that even if did and woke up to her parents not in bed and the lights turned off, she would scream until they returned. Billie said she was too afraid to get out of bed in the dark because she was afraid that there were scorpions crawling all over the floor.

Billie Eilish also stated that she would rather die than never become a parent. The singer candidly confessed that having children was one of her life goals and described how she “needed” them. However, Eilish admitted that watching her children grow will definitely scare her. She explained that the older she gets, the more she experiences things, which makes her worry about what she will do when her child thinks that something is the right thing to do when she believes that it is not. She claims that she is worried that they (her children) will not listen to her. Billie also expressed her concern over the recent string of school shootings in the United States. She went on to argue that it should not be acceptable for children to go to school afraid and claimed that there is no logic in children going to school prepared to deal with a horrifying and scarring life and death experience.

Also Read: Pankaj Tripathi’s Wife Mridula Is Making Her Bollywood Debut With ‘Sherdil’. How It Happened Is A Cute Story!

Billie has also admitted to becoming depressed amid her meteoric ascent to stardom following the release of her debut album, When We All Fall Asleep, Where Do We Go? In 2019, she was 17 years old when the album was released. Eilish has admitted that she truly didn’t embrace her success for a few years. She said that the during first few years of her work, she was very young and quite miserable and didn’t even know if she wanted anything that she had achieved or gotten. However, a series of behind-the-scenes developments have altered the star’s perspective on life.

Sobhita Dhulipala Gives Spring Flowers A *Major* Party Update in Latest Pictures. She Was Definitely Made In Heaven