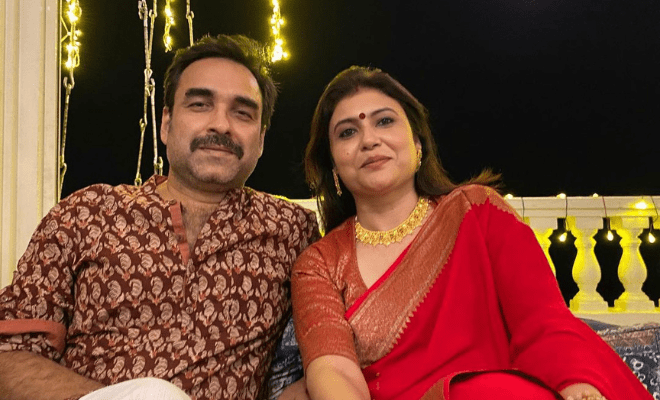 Pankaj Tripathi’s Wife Mridula Is Making Her Bollywood Debut With ‘Sherdil’. How It Happened Is A Cute Story!

One of the most underrated actors in Bollywood has to be Pankaj Tripathi. If you ask me, that man is the epitome of versatility – from comical characters to dons, he can play it all and how. I hold him in high regard and that is probably why I am eagerly waiting for his movie, Sherdil, to release. But there’s one more thing that has me excited about the film (yes, other than him). What is it? Well, it is the fact that his wife, Mridula is making her Bollywood debut with the film. Yep, Pankaj Tripathi in a recent interview shared that his wife Mridula is all geared up to make her Bollywood debut with his film Sherdil. He talks about how she immediately said yes to the opportunity.

In a recent interview, Pankaj Tripathi, who is right now preparing for the release of his upcoming movie Sherdil: The Pilibhit Saga, revealed that his wife Mridula is all set to make her Bollywood debut in the film. He then went on to share the story behind how she landed the role and it has to do with a gorgeous Bengali saree.

The actor revealed that Mridula is coming in as a guest appearance and the audience will see her playing the role of a Bengali. Pankaj Tripathi went on to share the story of how she bagged the role and even revealed that she didn’t ask for a single penny for her guest role.

Pankaj Tripathi said, “My wife Mridula will be debuting with Sherdil. She has done one scene in the film. Director Srijit Mukerjee, who has a Bengali connection with my wife, asked her to come on the sets and promised to give her one scene. She immediately said yes because she got to wear a beautiful Bengali saree in the film. It was an easy bribe, she didn’t even get paid.”

The revelation was an answer to the question of whether the actor’s daughter, Aashi Tripathi, who joined him at the recent IIFA Awards in Abu Dhabi had any interest in acting. To this, Pankaj Tripathi said, “As of now she has no plans to enter Bollywood. Right now she is studying. I haven’t seen the future yet but will see when the time comes. For now, I want her to study hard and play sports. But she writes really well, she is very good at literature and is at the top of her class. Also, she reads a lot, but for now, she hasn’t shown any interest. Will see what happens in the future.”

Pankaj Tripathi and Mridula met at a wedding in 1993 when both of them were still in school. Initially, the two struggled to convince their parents to get married as his sister was married to her brother and so it was against customs to have two marriages in the same family. However, everything turned out well for them and the two tied a knot in January 2004. Two years later, in 2006, they welcomed their first child, their daughter, Aashi.