It feels great when something on which you have really worked receives the due credit and appreciation. Alia Bhatt is going through a similar kind of emotions because her much-awaited project Darlings was finally premiered in New York City. This film is all the more special for her because it will also mark Alia’s debut as a producer. Darlings will be released to the audience on August 5, 2022, but with the NYC premiere and also a special screening that took place in the city, we already have some early reviews on the film, so maybe you can decide whether to watch it or not.

Alia Bhatt took to her social media account to repost some of the reviews the celebrities wrote after the premiere in New York. The premiere happened on August 4, and Alia was definitely thrilled about the premiere. She first posted the video of some media persons who got a chance to watch Darlings before the release, and the smiles on their faces were enough to say that they definitely loved the movie.

Alia first reposted her best friend Akansha Ranjan Kapoor’s review of her movie. Akansha could not stop praising Alia’s masterpiece, which makes you angry and laughs loud at the same time. She also praised the performances in the movie. 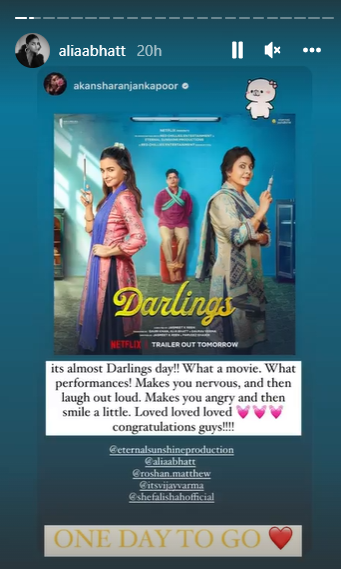 Alia then went ahead to repost some more reviews. In one of the reviews by  Aahana Kumra, she highly praised the movie. She wrote that it is an “important film” and then writes that is a dark comedy in which you will literally start hating the character of Hamza played by Vijay Verma. Aahana Kumra further wrote that we should watch it to know what happens to the character. She also congratulated the entire cast and team

Somen Mishra also put forth his reviews of the movie. According to it, Darlings is “twisted, fun and fantastic.” He also congratulated the director Jasmeet K Reen for a bang-on debut and praised the movie for being a perfect balance of “humour and madness.” Somen also congratulated all the cast members of the film for their brilliant performances. 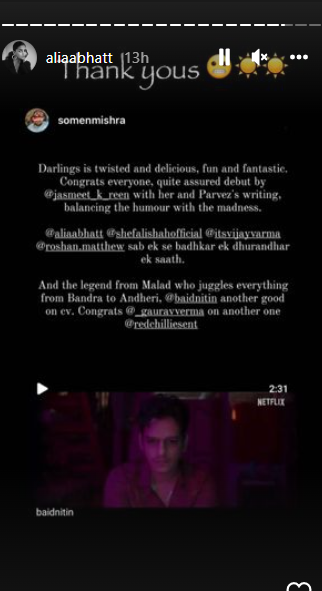 Alia Bhatt also reported Vasan Bala’s review on Darlings. As per Vasna, Alia is the best actor who pulled off the role perfectly. She also praised Shefali Shah and Vijay Verma for standing out with their performances. Vasna also complemented Jasmeet K. Reen on her spectacular debut as the director.

Mitakshara Kumar who is a well-known filmmaker also put forth her thoughts on the movie. According to Mitakshara the movie is entertaining and has a strong message, the combination of both keeps you hooked! She further wrote that it is an important film that should be watched for its twisted and humorous plot. 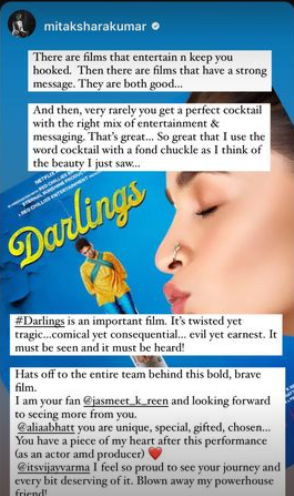 Also Read: Exclusive: Shefali Shah On Her Whacky ‘Darlings’ Character, Chemistry With Alia Bhatt, And Not Undermining The Indian Audience

These reviews now definitely have convinced me to watch the film.