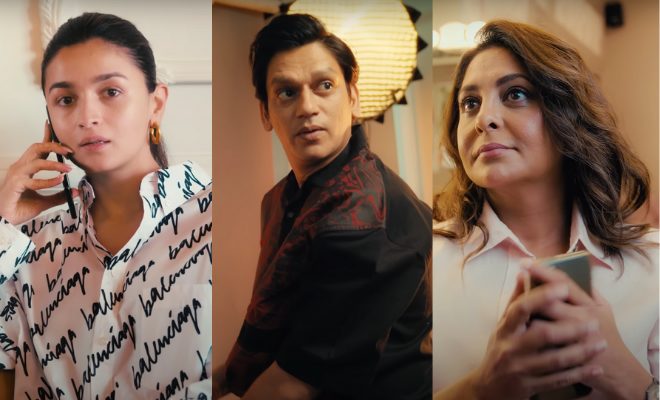 This Video Might Be Dark, But It Sheds Light On The Teaser Release Date For Alia Bhatt’s ‘Darlings’!

As a cinema lover, I know that a good story is the most essential aspect of a film or series. But I’ll admit that a stellar cast also greatly impacts the story. Okay, if you don’t want to believe me, then you should definitely take a look at the cast of Netflix’s upcoming movie titled Darlings starring Alia Bhatt, Vijay Varma, and Shefali Shah. And in a very dark video, Alia shared that the teaser of the highly-anticipated comedy-drama film will drop tomorrow.

On Monday, Alia Bhatt shared a dark yet hilarious video on her social media account and announced that the teaser of her next film Darlings is going to release on July 5. In the short dark video, the lead actors – Alia Bhatt, Vijay Varma, and Shefali Shah can be heard laughing and chit-chatting in a dark room as they revealed a few things about their film. They mentioned that Darlings is a dark comedy film which is full of suspense and now we are intrigued but as Alia said, “Waits ya, malum padd jayega.” Sharing the clip, she wrote, “thoda dark … thoda comedy DARLINGS teaser out TOMORROWS.” The video is kaafi dark and kaafi funny, to be honest!

Directed by Jasmeet K Reen, the dark comedy film Darlings is produced by Gauri Khan, Alia Bhatt and Gaurav Verma under the banners of Red Chillies Entertainment and Eternal Sunshine Production. The makers have not revealed the film’s release date but it is going to premiere on Netflix this year.

After the announcement, we can’t wait for the teaser to drop tomorrow. Are you excited about the dark comedy film Darlings featuring Alia Bhatt, Vijay Varma, and Shefali Shah?