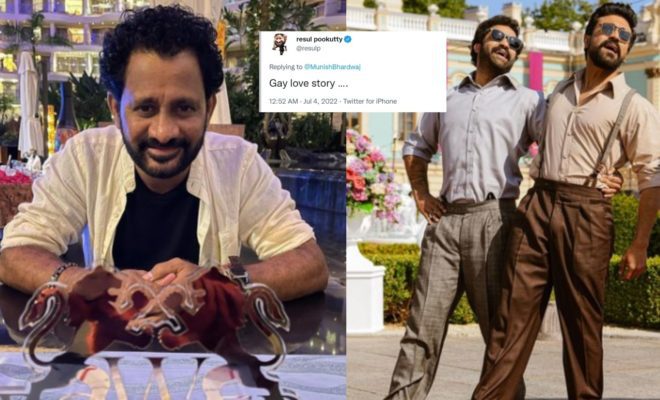 Social Media platforms have become quite a forum for debate, discussions, opinions, and its negative aspects- Trolling. Especially Twitter is a social space where anyone can put forth their opinion regarding anything and everything. Speaking his mind on the platform, sound director Resul Pookutty put forth his comments on the blockbuster South Indian movie RRR, and that was certainly not well received by the fans.

The blockbuster directed by SS Rajamouli starred Ram Charan and JR. NTR in the lead roles. It also had Alia Bhat in a cameo role. It is based on a fictional story about two revolutionaries and has been set in the 1920s. The movie was critically acclaimed and received a huge response from fans and movie lovers. However, the Oscar winner sound designer Resul Pookutty’s comment on the film has left the fans disappointed. Munish Bhardwaj a writer, in his tweet called, RRR a “garbage”. In a reply to this tweet, Resul called RRR “a gay love story”. Further commenting on the same, he also tweeted that Alia Bhatt was a prop in the film.

The comment option on the tweet has been disabled by Resul. However, people still tagged him and tweeted to express disappointment. Some were really shocked to hear such a comment from an oscar winner. And there were also tweets that slammed Resul for portraying his opinion towards the LGBTQ+ in such a demeaning way. Most of the Twitter users saws Resul’s comment as an insulting statement about gays and the community as a whole. Some netizens also said that Resul Pookutty behaved like trolls, as per the news.

Also Read: Joseph Morgan AKA Klaus Mikaelson from ‘The Vampire Diaries’ Is All Praise For SS Rajamouli’s ‘RRR’

Every action has an equal and opposite reaction, and Twitter can definitely be a harsh place for criticism. Every word here should be put forth properly.