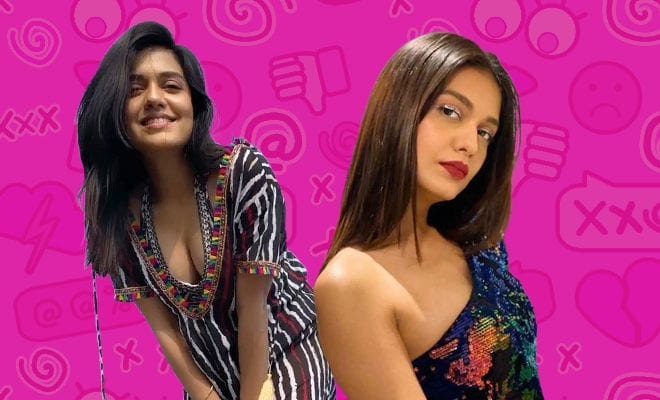 Divya Agarwal Calls Out Perverts Who Shamed Her For Showing Cleavage In Her Instagram Video. It’s Epic

I believe obscenity, much like beauty, lies in the eyes of the beholder. And, each day I come across so many instances that make me believe in this strange idea stronger. You could wear a saree or a dress and there would be people who would find it inappropriate and indecent. While men would take your exposed legs as a sign that you are ‘asking for it’, some nosy aunties would declare your saree draping too provocative because your pallu was draped too low or blouse was low-cut. Online trolls are no less than these nosy aunties and pervy men. People have shamed women for wearing shorts that were ‘too short’ (I mean, they are called ‘shorts’ for some reason).

Recently, Television actress Divya Agarwal was also trolled for wearing a dress with a plunging neckline that exposed her cleavage, which we think was showing pretty tastefully. However, the comment section was filled with nasty comments. She posted an Instagram reel doing the runaway aurora trend on a beach. She is wearing a maxi dress with a plunging neckline. However, the moral police online found it extremely inappropriate for a woman to show cleavage and took it as an attention seeking stint.

A user wrote, “I don’t understand why you need to show your t**s like this such a bad way to get likes please grow up now.” Another user wrote, She is just trying to get attention by showing her boobs.” What? It’s just cleavage, not even boobs. How are they seeing obscenity in this? There were others who objectified her and said pretty nasty things about her too. Good that she doesn’t just sit back and take the rubbish from the trolls. She clapped back at them right!

Also Read: Donal Bisht Claps Back At Trolls For Shaming Her For Bikini Pictures. Her Choice Of Clothes Is No One’s Business!

She put up a story on her social media and wrote, “People commenting sh*t and objectifying me on my latest reel are the only ones who look at things in a certain way. When I shot and uploaded I saw nothing like it.. You think I’ll remove it after seeing *b**bs* are seen? You are so wrong trust me I’m worried about the women around you perverts.” In another story, she told her female followers to not ignore such comments and shut whoever shames them for wearing what they want. “I don’t get affected at all I want the girls to give it back and teach them a lesson everytime these perverts speak rubbish,” she wrote.

Women celebrities, especially TV actresses, always find themselves being a soft target for the trolls to shame and bully online for wearing a skimpy or revealing clothes. Be it a bikini or a dress with a plunging neckline, everything they do is measured on a moral scale. It’s wrong that people expect them to live up to the sanskari image of the character they play onscreen and think it’s okay to troll them if they don’t. In fact, Divya Agarwal was also trolled mercilessly and hated for returning to work soon after she lost her father. Then too, she didn’t stay mum and gave it back. It’s so cool that she doesn’t let people’s opinion bother her but she feels it’s necessary to clap back at them for their strange expectations and sick mentality. Divya Agarwal calling out the pervs on her reel who shamed her was the coolest thing ever!